What is the 'disruptive innovation' theory that pushed Intel to the top of the industry but put it in a pinch again? The low-end entry brand ' Celeron ' was announced by Intel, which established the Pentium brand of x86 architecture CPUs in 1993, as a low-priced version of Pentium II . James Allworth, a fellow researcher at the non-profit think tank Innosight , explains Intel's technology strategy ' disruptive innovation ' behind Celeron.

'Destructive innovation' is a theory advocated by Professor Clayton Christensen of Harvard Business School. Technology evolves based on performance indicators evaluated by key customers in the mainstream market. On the other hand, 'disruptive innovation' means to evolve 'disruptive technology', which has lower performance than conventional technology but has excellent characteristics in new value standards, and to open up new markets in niches. I will.

Andrew Grove, Intel's third employee, former chairman and CEO, read 'The Innovator's Dilemma ' by Professor Christensen, who advocated this 'disruptive innovation,' 'the most important thing I've read in 10 years.' I evaluated it as a 'book'.

In addition to reading his book, Mr. Grove incorporated Professor Christensen's theory into Intel's business strategy. Since that time, Intel has been competing with AMD and has been competing in the CPU market for desktop PCs, but Mr. Grove is prepared to compete for the share of his Pentium brand, low end, low price, low profit margin. We have decided to release the Celeron series that sang.

Celeron did not sell very well at first because it has lower processing performance than Pentium II, but the second generation Celeron with improvements such as installing L2 cache shows performance that exceeds Pentium II in some cases. It turns out that it is a hit because of its low price. It seems that the release of Celeron has certainly squeezed the share between Celeron and Pentium, but in the end Intel was able to acquire 35% of the market share. The result is truly 'acquiring new customers and expanding market share based on'disruptive innovation''. At the same time, the catchphrase of 'Intel Inside', which had been developed since 1991, became widespread, and around 2000, Intel became a synonymous company for desktop PCs along with Microsoft, and became the hegemony of the CPU market for desktop PCs. I grabbed it.

Mr. Grove, who has been involved in the management of Intel since 1987, retired as CEO in 1998 and retired as chairman in 2005. It was Paul Otellini who became CEO of Intel in the same year. Mr. Ottellini partnered with Apple, which was looking for a new development of Mac at that time, and realized 'Mac with Intel' soon after taking office.

At Apple's keynote speech held in 2006, when the Intel-equipped iMac was first announced, the following movie shows Mr. Otellini wearing Intel's work clothes when he took the stage with silicon.


'It seemed like Intel had won completely. Indeed, the deal between Apple and Intel was more important to Intel than ever before, but it said,'Intel's CPU market for desktop PCs. It didn't mean that it dominated, but rather that it meant that Intel had a relationship with a company that was thinking about what would happen next. '

In fact, there is a story that Intel will develop the chip of iPhone , which is an in-house smartphone that appeared one year after the announcement of the Intel-equipped iMac, and it is said that there was actually discussion between Intel and Apple.

However, the iPhone with Intel chip was not realized. In an interview with Otellini a month before he retired as CEO, Otellini said, 'Keep in mind that the talks between Intel and Apple were before the iPhone was introduced. Nobody knew what the iPhone was doing. Some of the chips they were interested in wanted to pay a certain price, and that price is our prediction. It was below the cost. I didn't know. The cost wasn't something that could be covered by the quantity. But now that I think about it, the estimated cost is wrong and the quantity needed is It was 100 times more than I expected. '

Intel had already released XScale , a 32-bit processor based on the ARM architecture , for PDAs and 3G mobile phones at that time. If Intel had developed a product from this XScale that would improve power efficiency and successfully installed it on the iPhone, there might have been a different future.

In recent years, Apple has adopted Intel chips for Macs, but on November 11, 2020, Apple announced the first Mac equipped with its own developed SoC 'M1'.

AnandTech, a technical news site, has created the following graph comparing the performance results of the benchmark test ' SPECint2006 ' measurement on Intel Core i9 series and Apple SoC. The vertical axis is the performance value, and the horizontal axis is when the chip is released. 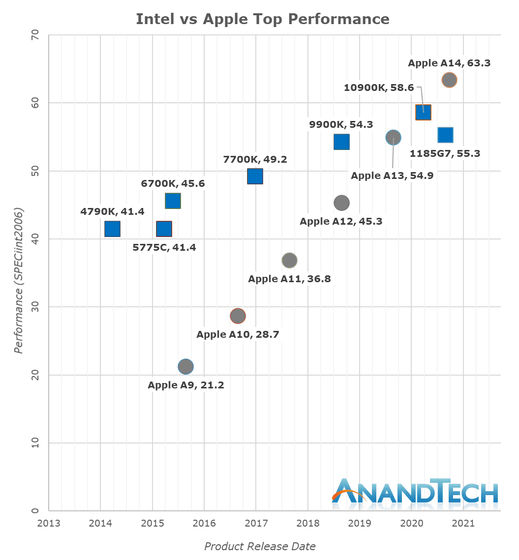 And the following is the graph shown in the 'disruptive innovation' theory published by Professor Christensen in 1995, 'Even if the technology is initially inferior in performance, it dramatically expands the market share, and the existing technology It will be improved much faster than technology. ' Allworth points out that it is very similar to the comparison graph between Intel Core i9 and Apple SoC. 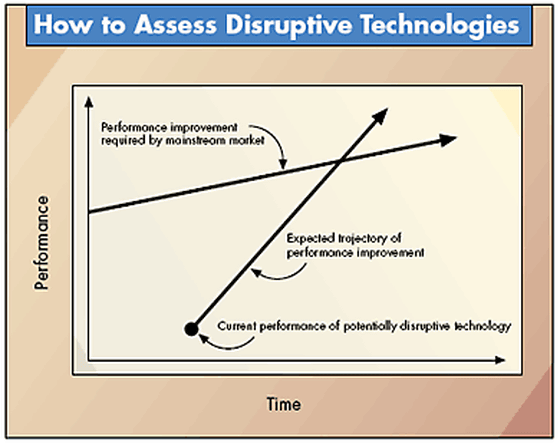 'The time Apple announced the M1 was exactly when the lines of Intel and Apple crossed, and ARM-based chips are also expanding their share of Intel's last stronghold in the server business market,' said Allworth. It's just a matter of time. '