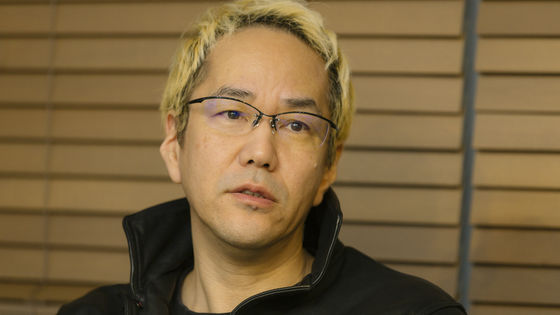 It was announced that director Kenji Kamiyama, known for the 'Ghost in the Shell STAND ALONE COMPLEX' series and 'Eden of the East', will be working on a new feature-length animation to commemorate the 30th anniversary of WOWOW. The title and content have not been announced yet, but it will be broadcast in 2022.

The comments by Director Kamiyama are as follows.

In 2020, the concept that has been warmed up for many years, the scenery that we have encountered in the past, and the big changes in people's lives. Based on all that experience, I am currently writing a script while valuing new ideas. We are about to enter the full-scale production period. We will continue to develop ideas while sharing our thoughts with the staff we trust.
This work will be presented as a program commemorating the 30th anniversary of WOWOW's opening. I can't tell you the story yet, but please look forward to what the story will be like.

Does the wing really fall at the same speed as an iron ball without air? Experiment in the world's largest vacuum chamber --GIGAZINE

Chariderman with malaria and typhoid fever in Congo, stuck without visa --GIGAZINE

This is a novel whose first title seems to be very smart, but when it became a sequel, the intelligence level dropped sharply pic.twitter.com/sdzjaNLBFA

It is a figure pic.twitter.com/0NL4eWB8DE

To the children This is not 'Kanjiro's taste paste' that you are willing to eat. It is 'Hamaotome nori'.
From my mother pic.twitter.com/H62hCIoga5

You can easily remove it by rubbing it with a wet tissue on the tweet that was full of sticking insects last year! Thank you very much to those who replied smoothly!
You saved me today Please forgive me I didn't believe much at the time pic.twitter.com/l27FwLV98y

Does anyone who tells Trump and Biden that 'unnatural movements have caused a reversal' as the ballot counting progresses do not know about the Japanese elections? The image is a graph of the ballot counting process of the Kagoshima prefectural governor's election, but the jump at the end is because the result of the urban area with many voters was reported. This is very common in many elections. pic.twitter.com/1VY9hMPSy7

Daughter talks about the disappearance of a diplomat 86 years ago Disgraceful news, remorse of his late father ... I have to talk now-Mainichi Shimbun

Victim is seriously injured with a hole in the intestine ... 'Air compressor' is sprayed on the butt of a colleague at the factory or a 30-year-old man is arrested 'I did it playfully' | Tokai TV NEWS

Learning from the cases of Sapporo and Sendai, the most new corona clusters | New coronavirus | NHK News

Make the very bad 'steamed bread in a pack' delicious with a little effort. https://t.co/EpiRH5JQmw

When making egg soup ① Turn off the heat when the soup boils ② Stir in one direction to create a stream of water ③ Put the beaten egg in the reverse direction and the egg will look like a fluffy maiden's feather coat .. It's a simple trick, but it looks and feels much better, so I 'll repost it ~ #Iitamago no Hi pic.twitter.com/zSQI6Ru2WJ

◆ IT / Gadgets (Net / Soft / Hard / Mobile)
We have started distribution of a modified version ('1.1.5') of the contact confirmation application 'COCOA' | Ministry of Health, Labor and Welfare

Apde 50GB is a hot topic, but let's take a look at the SD card 16 years ago. pic.twitter.com/0PYgGWCWf1

The number of reports and contacts has increased, so I'm sorry!
Currently, there are many unauthorized goods of 'Tottsu ni Egyptian God' on Amazon! It's been over two weeks since I contacted Amazon to withdraw my listing, but it's still there.
Don't buy! pic.twitter.com/NaysDAHoLq

Robot hand completed!
I'm glad I was able to complete it while I was in high school pic.twitter.com/vAzw56K4Tk

The first PV of the original TV anime 'Bakuten !!'


The first PV of the TV anime 'Mashiro no Oto'

The first is 'The Liberation of Gracemeria Dance With The Moonlight Remix' from Ace Combat 6.

It is a 4-frame cartoon. pic.twitter.com/3GnHrbFxec

Q. What will happen to the world if Biden becomes the next president of the United States?

A. I don't know. At least you can read the Oath of Friendship Treaty to Yujiro Hanma, which is the annual event of the Baki series pic.twitter.com/tNq7dip3Ov

Sumijiro who is familiar with how to interact with SF pic.twitter.com/drlQtTO8iO

— Ponkichi Oyasai Fairy decided to make a book to be released at the end of November (@PonkichiM) November 4, 2020

Completion of the basic part of the game ・ Automatic map generation ・ The defense side sets the hidden place of the defense target ・ Weapon and gadget selection after spawn Future development schedule ・ Improvement of the accuracy and furniture arrangement of the automatically generated map ・ Furniture can be defeated and moved・ Implementation of gadgets (drones, barbed, etc.)
・ Etc ...
Please give me an idea with a lip #RT hope #projectF pic.twitter.com/C7zQ7AgwPJ

YOASOBI will be in charge of the second anime OP theme for BEASTARS! !! I'm looking forward to it! Broadcasting in January is approaching! pic.twitter.com/wqg4005x4G

A long time ago, there was a ghost story at a school where I saw Ami Shibata, who is doing virtua at a game arcade in Koenji, but I'm definitely mine. Ami Shibata #Ami Shibata #VF #Virtua Fighter #SEGA

Click here for the ghost story of a cartoonist who really happened [Road to the Hero] https://t.co/rV8h3aR5y5 pic.twitter.com/biIIkwY5f6

This manga is often quoted recently, so I'll repost it. pic.twitter.com/lsyqIzSB82

Chainsaw Man 9 volumes of story summary I like how to summarize the site roughly pic.twitter.com/3BIQMILwiX

Yoshiyuki who makes a statement to the gacha's bomb death report pic.twitter.com/FctpAmOQK7

Learned from the Minako Narita exhibition On the contrary, the original manga is not a picture ｜ Hibiki Takemura ｜ note

When I heard this story, I was almost crying ... I endured it because it was a company ... pic.twitter.com/xhVp1FN63Q

What is it?: What J The second season of my favorite anime doesn't come for some reason