I tried to find out how popular Demon Slayer: Kimetsu no Yaiba is in the world using 'Flix Patrol' which can see the Netflix view ranking The movie version of 'Demon Slayer: Kimetsu no Yaiba' infinite train has recorded 7.98 million spectators in 10 days since its release , and it is a big boom in Japan, but how much is it in the world? I'm wondering if it's popular. I searched using the web service ' FlixPatrol ', which allows you to browse the playback rankings of multiple video distribution services such as Netflix up to 100th, and see the rankings of each country on a weekly or yearly basis.

TOP 10 on Streaming in the World Today | FlixPatrol
https://flixpatrol.com/ First, let's take a look at Netflix's views ranking in Japan this week. Click 'Streaming' and click 'Netflix' from the list of streaming services that appears. If you click 'Today' and then 'This Week' to select the aggregation period ... This week's Netflix views ranking in Japan is displayed. In this example, the 44th week of 2020 (October 25th week) is displayed. The default is the movie category ranking, which is ranked from 1st to ' LUCY ', ' Wanted ', and ' Doomsday '. 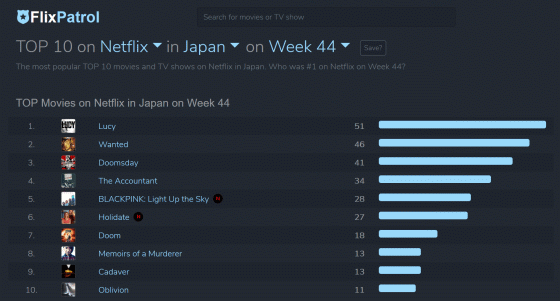 Scroll down the screen to see the TV show rankings. First place is '

Below is a detailed page about 'Demon Slayer: Kimetsu no Yaiba'. The title, image, description of the work,

score on the review site , and ranking in the world for each period are displayed.

You can also scroll down to see the weekly rankings by country. You can see that 'Demon Slayer: Kimetsu no Yaiba' is ranked first in Japan and in the top 10 in Taiwan throughout the week.

'Demon Slayer: Kimetsu no Yaiba' is ranked 34th at the time of writing the article. 'One Piece' is ranked in 27th place. Then, if you look at the details page, what kind of country is 'One Piece' popular? You can see that it is widely regenerated in South American countries such as Bolivia, Brazil, Colombia and Costa Rica. 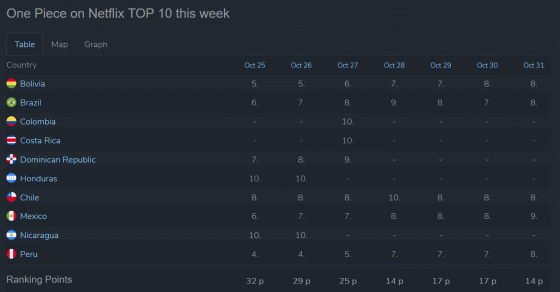 Netflix makes it easy to find the movie or TV show you want to watch with the recommendation function based on the user's viewing history and the 'Today's Overall TOP 10' function, but the ranking does not show content below 11th place, There are no functions such as weekly ranking or annual ranking. Flix Patrol displays rankings up to 100th, which is convenient when you want to see more detailed rankings or when you want to compare with the playback ranking of streaming services such as Amazon Prime Video and Disney +. A web service that is fun just to look at, not only to find the content you want to see, but also to know how popular the title you are interested in in the world, or to know the content that is popular in other countries. was.