In optogenetics, which controls the activity of nerve cells (neurons) by

shining light, a paper has been published that succeeded in controlling nerve cells in the brain by shining light from the outside without performing brain surgery. it was done.

No Implants Needed For Precise Control Deep Into The Brain --IEEE Spectrum
https://spectrum.ieee.org/the-human-os/biomedical/devices/deep-brain-control-without-implants

The term optogenetics was coined by Karl Deisseroth, a neurobiologist at Stanford University. Optogenetics is a discipline that studies cell activity based on a new method of 'expressing light-sensitive proteins that respond to light by gene editing in cells and inducing and modifying cell information by photostimulation.' ..

The first to open the door of light genetics, Max Planck Institute for Biological Studies of Peter Hegeman and colleagues was published in 1991 paper is. Hegemann and colleagues noted that the unicellular alga Chlamydomonas changes its swimming direction in response to light, and found that the light-sensitive protein rhodopsin is involved in the mechanism by which light affects the movement of Chlamydomonas.

Then, in 2005, Diceros expressed channelrhodopsin 2 (ChR2), a light-sensitive protein, in hippocampal-derived neurons on a culture dish and regulated neural activity in milliseconds simply by exposing it to light. I succeeded in doing so. In 2007, a paper was published that succeeded in applying optogenetic technology to living mouse neurons. In response to this, Mr. Deisseroth succeeded in an experiment to induce fear memory with light in mice by applying optogenetics technology. Furthermore, in 2013, a Japanese research team succeeded in artificially creating false memory by shining light.
Susumu Tonegawa and RIKEN's team succeeded for the first time in the world in creating false memories by shining light on the brain --GIGAZINE 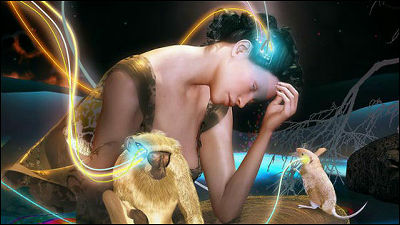 In order to manipulate nerve cells in the brain of living mice with light, it is necessary to irradiate the brain with light pulses to control the cells, and from tethered optical fibers small wireless implants and elastic spine There has been a need for surgical implants, such as implants.

Therefore, Mr. Diceros expressed a new light-sensitive protein called ChRmine, which was discovered in marine organisms in 2019, in mouse brain cells. By shining red light from the outside of the skull, we succeeded in controlling nerve cells in the midbrain and brain stem at a depth of up to 7 millimeters in milliseconds.

Traditional optogenetic techniques require the brain to be injected with a virus that has been injected with a specific trait gene in order to express a photosensitive protein. To avoid this, Mr. Diceros' team took a method of injecting the PHP virus developed at the California Institute of Technology in 2016 into the blood. In other words, not only the light source but also the gene for the light-sensitive protein was injected into the brain in a non-invasive manner. Mr. Deisseroth is testing whether the non-invasive method announced this time can be applied not only to mice but also to fish. Also, in cooperation with other research teams, it seems that they are conducting research that applies to primates other than humans. 'This is one of the great conclusions of our 16 years of research,' said Deisseroth. 'We are delighted to share this non-invasive optogenetic method with everyone. We hope that will be a widely available and applicable research tool. '