40% of respondents answered, 'You can let go of your dog for a month for your smartphone.' 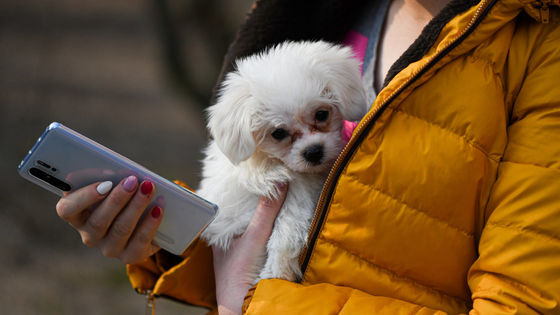 Nowadays, many people feel uneasy or uncomfortable if they don't have a smartphone. When a market research company asked the owner of a smartphone, 'How much important things would you sacrifice for your smartphone?', 'Pet dog,' 'loved one,' 'liquor,' 'coffee,' etc. It turns out that various things are thought to be 'tolerable for a while for smartphones.'

What Sacrifices Would You Make to Keep Your Smartphone? | SimpleTexting

Market research firm Simple Texting conducted a survey of 1,000 smartphone users in all 50 states in the United States asking, 'What joy do you sacrifice for a month for your smartphone?' 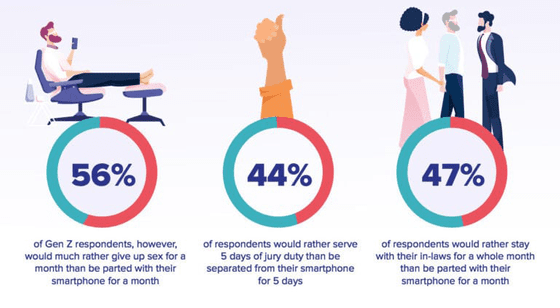 In addition, entertainment and leisure have been the victims of smartphones one after another. 70% of the respondents said, 'Rather than letting go of the smartphone for a month, I will put up with the movie distribution service Similarly, 'If much let go of the smart phone, online shopping giant Amazon and retailers 57% of respondents Target let go forever,' said another who responded, 'give up the vacation forever,' said the answer was people also 39% I went up to. 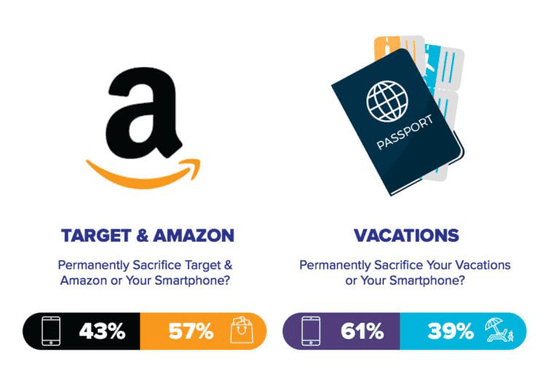 When asked to replace the value of keeping a smartphone with money, it was confirmed that the younger the generation, the more important it is to the smartphone. The following is the answer to the question 'How much would you like to have a smartphone for a year?' From left to right:

Baby Boomers born immediately after the end of World War II, Generation X and Generation Z born in the 1960s and 1970s. , It is a graph for each millennial generation. 60% of baby boomers, 50% of X generations, 46% of Gen Z, and 34% of millennials answered that 'the amount of money that can be paid instead of a smartphone is less than $ 1000 (about 105,000 yen) per year'. The result is that there are fewer generations. 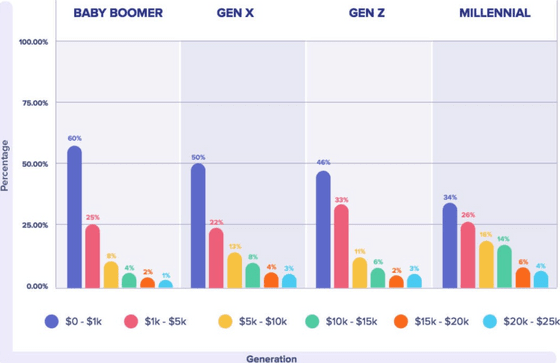 SimpleTexting says, 'In summary, many people are willing to take every risk for their precious digital devices. Fortunately, most adults don't have to worry about their smartphones being picked up. In the future, we'll be more You'll make more calls, send more text messages, download more apps, and keep watching more social media. '