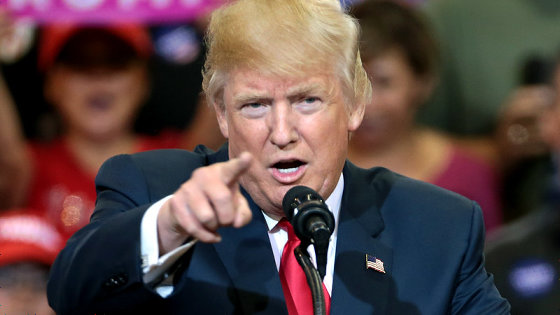 Lack of sleep can affect, such as the concentration and memory capabilities and mood from past studies found have been, if not in the excessive lack of sleep, the human performance in only continue for 6 hours sleep fall as comparable to stay up all night It is said that . Therefore, a new research team at Columbia University announced that by analyzing President Trump's Twitter post, which has evolved into a censorship problem on SNS due to radical remarks, performance can be predicted by President Trump's bedtime.

Columbia University economics professors Douglas Almond and Sim Min Du use President Trump's tweets from January 24, 2017 to April 10, 2020 as indicators of 'sleep time.' And analyzed. Normally, President Trump started tweeting at 6 am, posted once every two to three hours, and the average number of tweets per day was 10.

President Trump's behavior of waking up around 6am every morning is consistent between 2017 and 2020, while Twitter activity between 11pm and 2pm has increased by 317%. understood. Shortly after taking office, President Trump posted late-night posts about once a week, but in April 2020 it increased to three times a week. Studies show that the average posting time three times a week is 0:06 midnight. 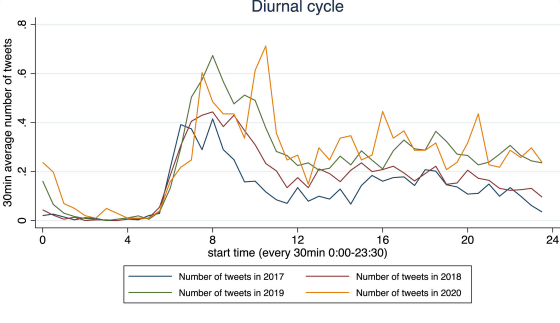 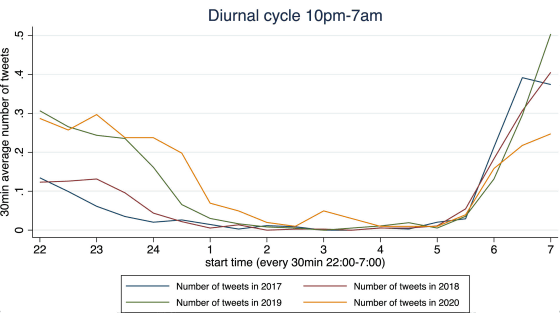 The Centers for Disease Control and Prevention recommends 7-8 hours of sleep for adults over the age of 65, but the study estimates that President Trump sleeps at least 6 hours three days a week.

Researchers also revealed that the day after they tweeted until midnight, President Trump's tweets averaged 7,400 fewer likes, 1,300 fewer retweets, and 1,400 fewer replies. This means that the performance of tweets is 6.5 to 8% less, and it tends to be difficult for people to post content that resonates.

This is a graph with the ratio of emotions such as happiness and satisfaction to tweets on the horizontal axis and the time from 2017 to 2020 on the horizontal axis. In 2020, the graph has picked up a little, but other than that, it can be seen that it has been declining consistently since the inauguration of the president.

The results of this study are based on President Trump's public schedule and Twitter posts, but keep in mind that they don't always match actual sleep times. However, researchers said, 'In our study, shorter sleep times during the president's first term and the pattern of poor performance due to lack of sleep were part of it.' 'If the president's sleep time is optimized.' If not, this is a problem to be solved. '