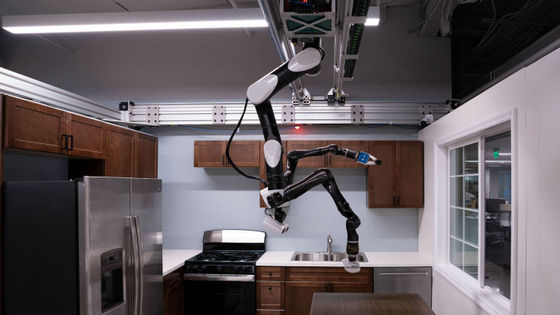 Toyota Research Institute (TRI) , a subsidiary of Toyota Motor Corporation, which conducts advanced research on artificial intelligence technology, has announced a concept model of a domestic robot ' Gantry Robot ' to be installed on the 'ceiling'.

Toyota's ceiling-mounted robot is like GLaDOS for your kitchen | Ars Technica
https://arstechnica.com/gadgets/2020/10/toyotas-ceiling-mounted-robot-asks-what-if-glados-could-do-the-dishes/

Toyota's robot butler prototype hangs from the ceiling like a bat --The Verge
https://www.theverge.com/2020/10/1/21496692/toyota-robots-tri-research-institute-home-helping-gantry-ceiling-machine

The Gantry Robot is an upside down robot connected to a pedestal installed on the ceiling as shown below. The pedestal is made of aluminum and is installed on a movable beam that runs around the ceiling. Since the power cable etc. can be stored in this beam, no battery is required for the Gantry Robot body. You can check how the Gantry Robot is actually operating from around 26 minutes 20 seconds in the following movie. In addition, this movie is VR compatible and can move the viewpoint 360 degrees.


The Gantry Robot hangs from the ceiling, so you can clean the top of the refrigerator, which is out of reach of people. For safety reasons, it operates slower than people, and the tabletop and kitchen can be cleaned at night when the family is asleep. The arm part is a scissors type, and it is possible to grab an object. In the movie, lift the plastic bottle ... He stored the PET bottles in the rack part. The Gantry Robot was originally supposed to be connected to a pedestal with wheels like Roomba. However, since it requires a large amount of battery capacity and computing power, the pedestal part has become huge by all means, so it was concluded that 'assuming the floor area of a Japanese house, the operation will be limited'. It was said that it was reached. 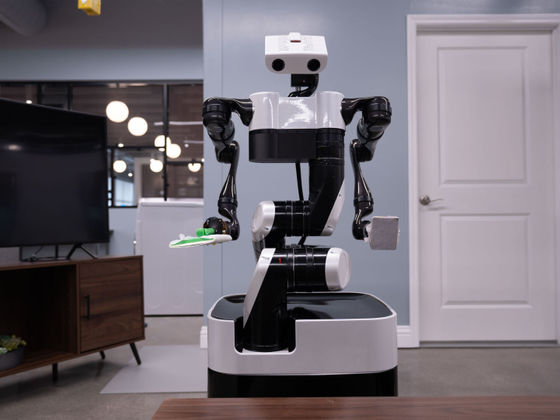 From such a background, it seems that the concept model announced this time has a novel style of 'installing on the ceiling'. The development team says that Gantry Robot aims to handle not only cleaning, washing dishes, carrying luggage, but also cooking, and one of the goals is to support the elderly.

In addition to the Gantry Robot, TRI has also announced an arm part for robots called ' 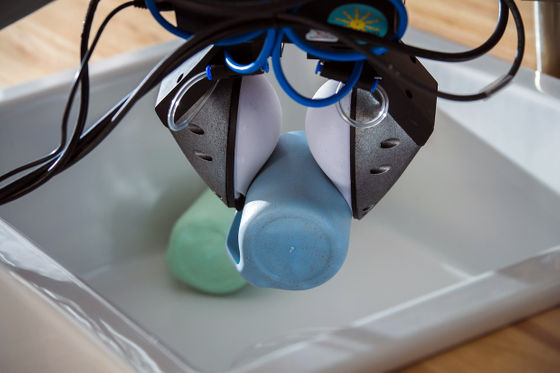 Below is a movie explaining the performance of Soft Bubble Gripper.


The arm equipped with Soft Bubble Gripper not only lifts PET bottle containers and cups in the sink, but also ... 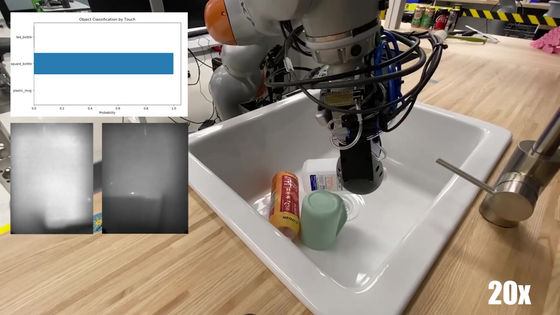 It is also possible to make a vertical row of glass towers.