[Obvious] Kosei Tomita, known for his role as Higeoyaji and the first Doraemon in Osamu Tezuka's work, died. 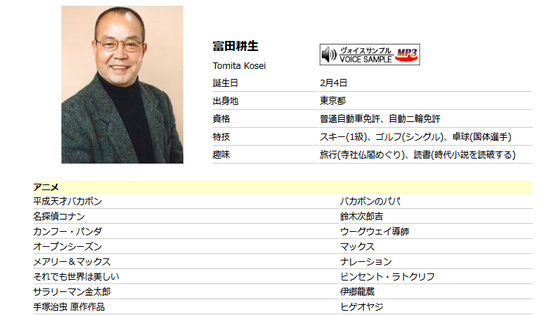 Kosei Tomita, who played an active role in Tezuka Osamu's works such as Higeoyaji, Doraemon (first generation), and Alexander Bucock in 'Legend of the Galactic Heroes', died on September 27, 2020 due to a stroke. understood. I was 84 years old.

Tomita was born in 1936 and is from Tokyo. In his long career, the first TV anime to appear was 'Astro Boy,' which was broadcast from 1963 to 1966. He was also in charge of the role of Inspector Blooper in 'Tetsujin No. 28,' which was also broadcast from 1963 to 1966. He also played the same role in the new 'Tetsujin 28-go (Tetsujin 28-go, the messenger of the sun)' broadcast in 1980. In addition, some settings were taken over in 'Six God Combination Godmars,' which was broadcast in 1981, and I was in charge of the role of Secretary Otsuka, who was promoted to Secretary in recognition of his achievements.


In addition, most of the roles of Higeoyaji appearing in Tezuka Osamu's original animation such as 'Jetter Mars', Dr. Hell of 'Mazinger Z', Dr. Saotome of 'Getter Robo', Yotsuya of 'Chodenji Robocon Butler V' He played many impressive middle-aged characters such as the role of a doctor, the role of Alexander Bucock in 'Legend of the Galactic Heroes', and the role of Tojin Toyama in 'Delicious Shinbo'.


A famous character as a surprising character is the role of Doraemon. As of 2020, 'Doraemon' is being broadcast on TV Asahi, but it had been broadcast on NTV for half a year before the start of the broadcast, and it was Mr. Tomita who played Doraemon at that time. The role of Nobita is Yoshiko Ohta, who is known for the roles of 'Jungle Emperor' Leo and 'Yatterman' Gan-chan. In addition, Mr. Tomita was in charge of the first half of 26 episodes (13 broadcasts), and Mr. Masako Nozawa was in charge of the second half. The widely known Nobuyo Oyama will play the role of the third generation Doraemon.

The agency, Production Baobab, is a voice actor office established in 1979 by Mr. Tomita and others independently of Aoni Production. Mr. Tomita was the first president.