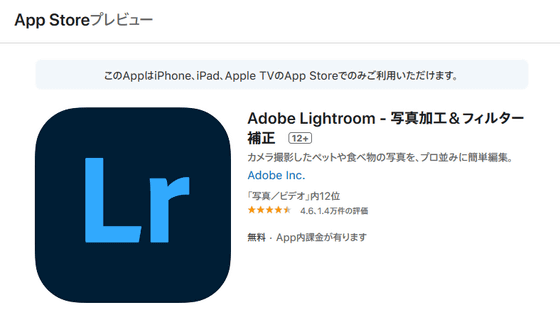 After applying the latest update to the iOS version application of Adobe Photoshop Lightroom, which is Adobe's photo editing software, a bug occurs in which all presets and photos of the application are deleted. Confusion has spread around the bug community around the bug, and some even argue that deleted data may have disappeared completely.

Since around 18th August 2020, reports such as 'When applying the latest update of Lightroom for iOS, the photo data saved in the application has been deleted' have been reported one after another on overseas bulletin board sites such as Reddit. One Reddit user said, 'I have been talking to customer service for more than 4 hours in the last two days and the problem hasn't been fixed a minute ago. Customer service said lost photos are unrepairable. Has been told,” and reports that over two years of photos edited in Lightroom for iOS have disappeared.

Twitter user Lauren Lambert said, 'Is anyone else missing a photo or preset with Adobe's Lightroom update? That's literally the worst. I have 800 photos and paying tens of thousands of dollars I lost my presets' and reported that not only the photos edited in Lightroom, but also the paid presets were deleted.

Did anyone else lose all your @Adobe @Lightroom photos and presets with their last update?! ???? This is literally the worst.I lost 800 pictures and all my paid presets (which are worth hundreds of dollars.) All they have to say is we apologize. ???? pic.twitter.com/5xGsJ3nEaR 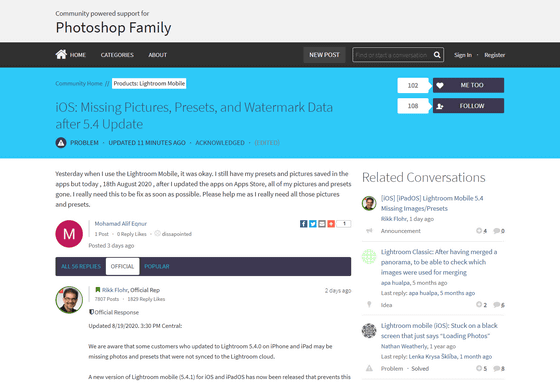 Lightroom for mobile (5.4.0) on iOS and iPadOS
https://helpx.adobe.com/lightroom-cc/kb/lightroom_mobile_5_4.html 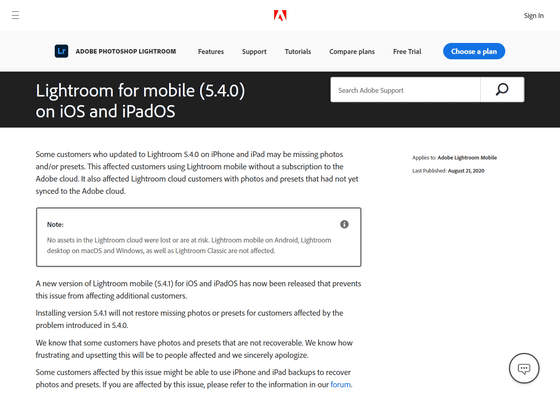 Note that Adobe has noted that some users may be able to restore data from iPhone or iPad backups.