Even if a new game console comes out, it will be something that an amateur can only understand, such as 'the image quality is beautiful' and 'the data reading speed is faster'. Software engineer Rodrigo Coppetti's website 'Rodrigo's Stuff' explains various game consoles 'what is new compared to the previous generation and what functions have been added' in an easy-to-understand manner, parts and While focusing on the system, you can learn more about what technology is incorporated in each game console.

Architecture of Consoles | A Practical Analysis

I took a look at the Nintendo DS page to see how detailed it is. Click 'Nintendo DS'. 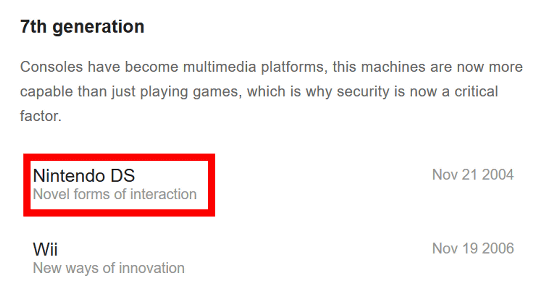 A picture of the game console is posted at the top of the page... Click on 'motherboard' to see the Nintendo DS motherboard. Also, by clicking 'Marked', it is possible to switch to an image with an explanation of what function each part of the motherboard has. Click 'Diagram' to check the block diagram of Nintendo DS. 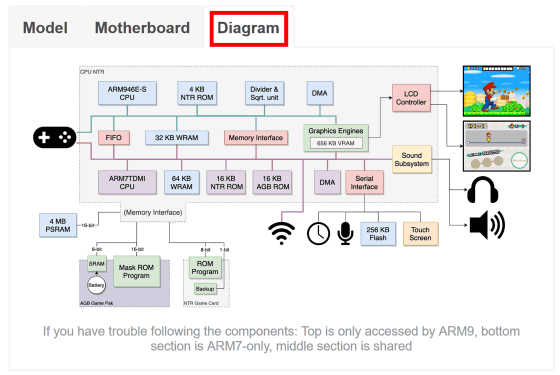 Mr. Copetti's commentary is not only illustrated, but the text also explains and considers the game machine quite thoroughly. For example, in the CPU explanation part, the roles of '

ARM7TDMI ' and ' ARM946E-S ' used by Nintendo DS were described. ARM7TDMI is also used as the main CPU of Game Boy Advance (GBA), but ARM7TDMI of Nintendo DS has a maximum frequency of 34 MHz which is about twice that of GBA, and in Nintendo DS I/O instead of main CPU It is explained that it operates as a sub-processor that operates the port, and details about how it changed from GBA in terms of system. 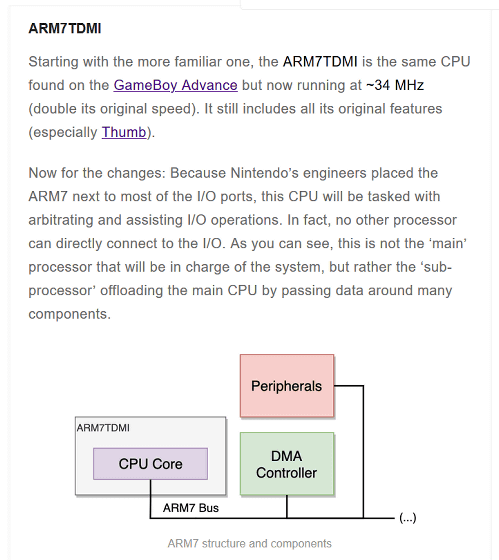 Also, although the design of the Nintendo DS has changed significantly compared to the GBA, it was also explained in detail that the structure for maintaining compatibility with GBA games is maintained. According to Mr. Coppetti, when starting the game of GBA on Nintendo DS, ARM946E-S is stopped, most of the hardware is disabled, and then the frequency of ARM7TDMI is dropped to 16.78 MHz which is the same as GBA.

It is said that the memory has also changed significantly from the GBA, and the RAM is distributed according to the role to improve the data access speed. 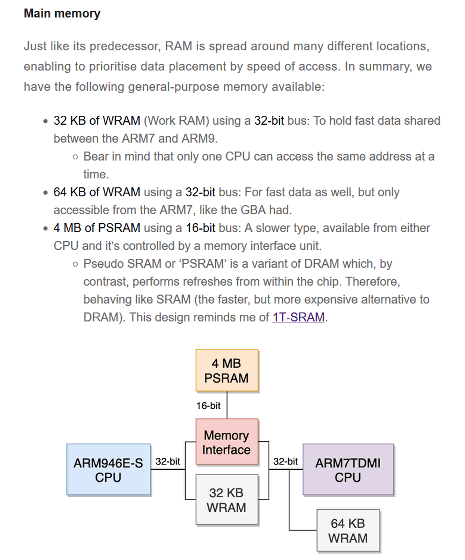 For example, '4MB PSRAM' in the following CPU and memory configuration diagram is a low-speed type RAM that can use either ARM946E-S or ARM7TDMI, and '32KB WRAM' is a high-speed shared between ARM7TDMI and ARM946E-S. It is used to hold data. '64KB WRAM' is a RAM for high-speed data, but it can be accessed only from ARM7TDMI used in GBA. 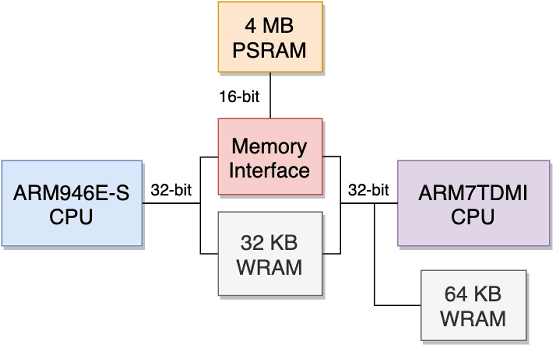 The explanation of the features related to graphic drawing is also substantial. The Nintendo DS has two screens, each screen is 256x192 pixels, which is about 20% more than the GBA. It can display 262,144 colors (18 bits) and has a maximum frame rate of 60 Hz. The graphics system can draw 2D and 3D objects, and in the case of 2D, it draws 2D objects using image data arranged in tiles. 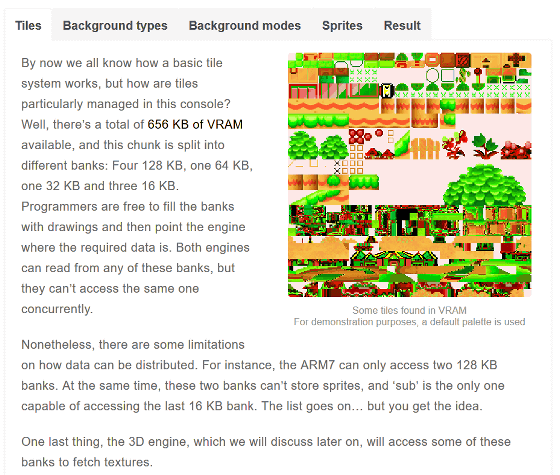 It is also explained that when drawing the screen in 2D, it is drawn in several layers.

Also, the 3D drawing system is explained with a comparison with Nintendo 64. Compared to Nintendo 64 (left), Nintendo DS (right) has improved image quality, but the edge is stronger. This seems to be because the rendering engine of Nintendo DS has evolved, but it is rendered at a lower resolution than Nintendo 64.

In the audio part, you can check the degree of evolution while actually listening to and comparing GBA, Nintendo DS, and Gameboy Advance music. 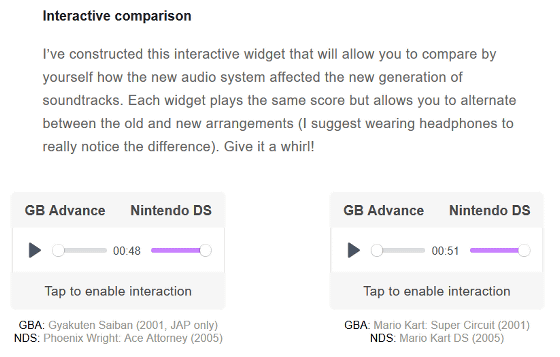 It was also mentioned that the Nintendo DS was the first home appliance to have touch screen, microphone, Wi-Fi, and real-time clock on the same console. It is stated that it was an innovative game machine as a hardware that provided a new experience to the user, such as splitting the screen into two and playing the game horizontally and vertically. 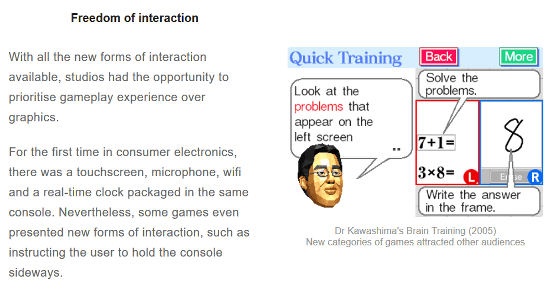 Mr. Copetti is planning to explain not only the latest hardware at the time of article creation such as Nintendo Switch and PlayStation 4Xbox One, but also retro hardware such as Commodore 64 .