It has been thought that 'adults need 7-8 hours a day to sleep, and short sleepers that sleep shorter than humans suffer from insomnia and depression.' Now, the existence of 'people who can think positively, move actively, and live longer without having to get a lot of sleep due to genetic mutation' is becoming clear.

Not Everyone Needs 8 Hours of Sleep, New Research Reveals | Time

Lack of sleep stroke , diabetes, cancer , Alzheimer's disease are thought to be associated with various diseases, such as, in general, as 'adults need to sleep a day seven to eight hours,' it is said . There is no doubt that sleep is important to your health and is associated with many disease risks, but on the other hand, what is happening in your body during sleep and how your body's function is regulated. I don't really know if.

Researchers identify loci associated with morning and night types by analyzing about 700,000 genes-GIGAZINE 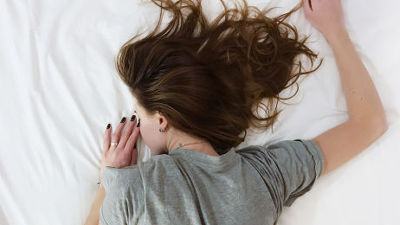 Associate professor Shimei Shoe , who studies biophysics at the University of California, San Francisco (UCSF), describes his sleep habits by saying, 'The sleep rhythm of 4 hours a day is the most vibrant.' , Sleeping for 7 to 8 hours made me feel sick. Thus, in recent years, rather than thinking that 'every person needs 7 to 8 hours of sleep a day,' research is progressing from the perspective that the required sleeping time varies depending on the individual.

Neuroscience professor Luis Putek, UCSF, and his wife and professor of neurology, In Hoi Fu, are pioneers in this new sleep category. In 2009, he first discovered that genetic variants are involved in the optimal sleep time required by an individual, and in 2019 the locus of the short sleeper born by short sleep is sufficient. Was identified . According to Hu's research, people who have a specific genetic mutation related to sleep can benefit from 6 hours sleep that those who do not have a genetic mutation can get from 8 hours sleep.

The research teams of Putek and Fu et al. continue their research by collecting data from the short sleepers including Mr. Shu mentioned above. Although it is not yet clear whether Mr. Shu has a particular gene mutation, researchers interviewed Mr. Shu's mother and found that his mother was also a short sleeper. For this reason, blood samples were taken from Mr. Shu and his mother for analysis.

Many doctors used to think that 'short sleepers suffer from insomnia and are depressed.' However, although the research is still in its infancy, the team said, 'Short Sleepers are not only more efficient at sleeping, they are also more energetic and optimistic than those who sleep longer, and they are pain-resistant and long-lived. There is a new discovery that there is a tendency. In fact, Mr. Shu has an active and positive personality, and because he is resistant to pain, he seems to have made a bruise without realizing it. Also, not only does the body clock vary from person to person, but the brain and organs also have different clocks in the same person's body, says Steven Lockley of Harvard Medical School. There is a circadian rhythm in each organ such as the heart, lungs and kidneys, and all things such as metabolism, hormones, immune system, reproductive function, DNA translation are affected by the circadian rhythm.

In addition, previous studies have suggested that the system of internal body clocks of organs is extremely complicated, and that the timing of the day may cause abnormal cholesterol levels or the effectiveness of drugs. I will. Also, in a study by Julian Gieras , when 11 men with type 2 diabetes were given high-intensity interval training , the group that exercised at 8 o'clock in the morning was better than the group that exercised at 4 o'clock in the evening. Also, it was shown that the blood sugar level became high. It has also been shown that 'time zone' influences the effect of exercise.

Research on the body clock is still in its early stages, but if the research progresses and the relationship between sleep and genes becomes clear, we will also be able to understand 'how sleep regulates each function of the body'. Is believed to be. Researchers believe that this will result in optimized medical practices for individuals rather than uniform medical care.