Even if eaten by a frog, an insect that can escape from the 'butthole' while alive is discovered 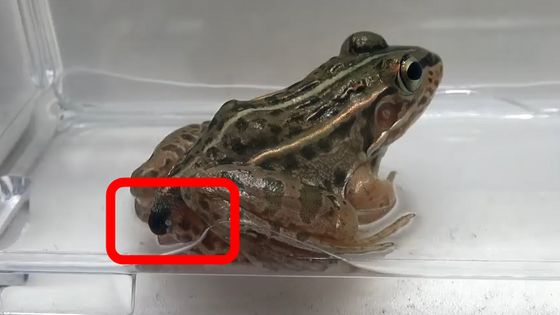 In many cases, predators in nature mimic the surrounding environment and have various defense systems to reduce the risk of predator eating. However, aquatic insects called '

beetle bugs ', which widely inhabit rice fields in Japan, have a way to escape alive 'after being eaten' by predator frogs, according to Sugiura of Kobe University. Associate Professor Shinji made a presentation.

Discovery of an insect that escapes alive through the hole in the hips when eaten by a frog | Research at Kobe
https://www.kobe-u.ac.jp/research_at_kobe/NEWS/news/2020_08_04_01.html

It is known that insects take various escape/defense actions to prevent them from being eaten, and until now, the action 'before contact with predators' was the main research subject. However, in recent years, it has been discovered that insects have the type of behavior that escapes from the body of a predator 'after being eaten by the predator.'

Many frogs have no teeth, so swallowed insects and small animals may continue to live for some time. Therefore, Associate Professor Sugiura has given various terrestrial and aquatic insects to the frog, a predator, in the laboratory, and studied what kind of escape and defense actions insects take.

As a result, it was revealed that aquatic insects beetle bugs that live in paddy fields in Japan, etc. 'can escape from the ass hole (total discharge cavity) as alive' at a rate of 90% or more even if it is swallowed by Tonosamafrogu That. You can see how the giant beetle actually escapes from the hole in the butt of Tonosama frog by watching the following movie.


The giant beetle is a small aquatic insect with a length of about 5 mm, and is found in water-stop areas such as ponds, wetlands, and paddy fields. 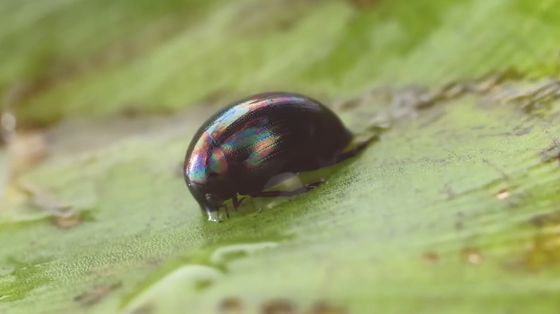 If you give a giant beetle to a toad tree frog in a tank... 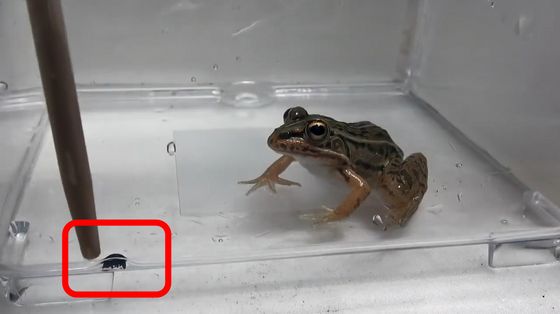 It was eaten in an instant. 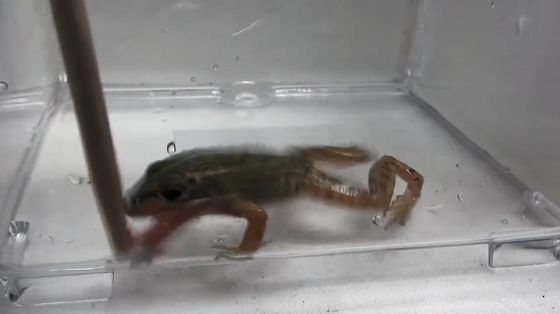 Although I was about to jump out of my mouth... 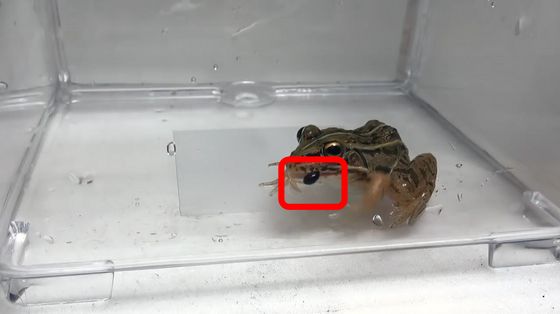 It was held down by hand and swallowed firmly. 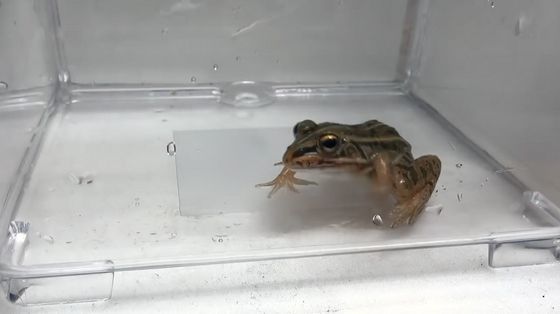 115 minutes have passed since the beetle was swallowed. 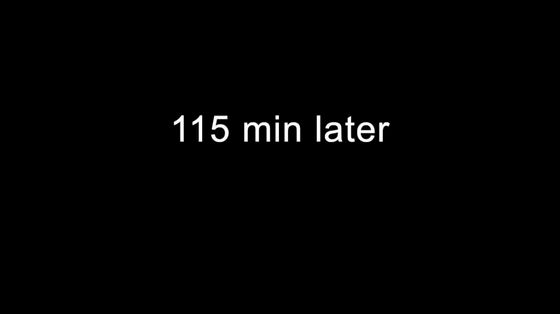 A dark object can be seen through the hole in the bottom of the tree frog. 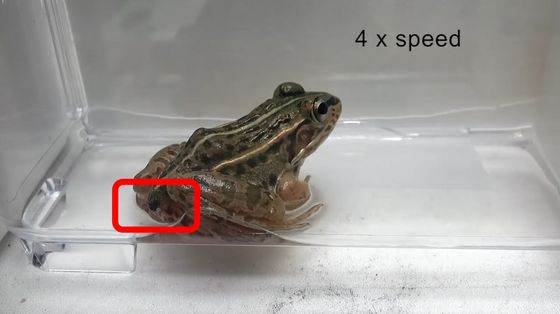 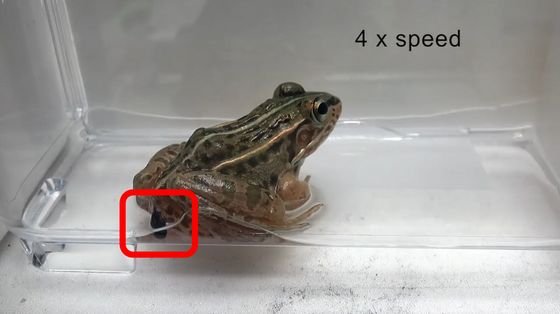 Amazingly, the beetle is alive and slowly struggling to leave the frog. In the experiment, 14 out of 15 beetles succeeded in escaping from the ass hole alive after being swallowed by the frog. The beetle was often involved in frog excretion, but he recovered immediately and survived for at least 2 weeks after excretion. 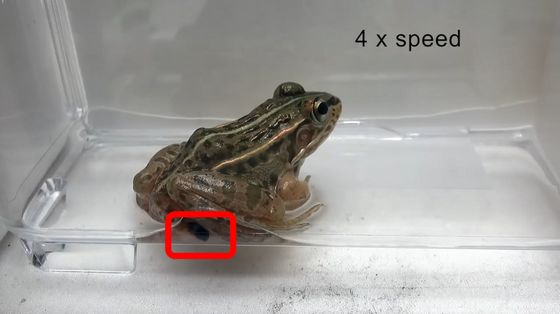 Mamegamushi that the possible escape is not limited to the frog,

Tokyo Daruma Frog , Tsuchigaeru , fejervarya limnocharis , Japanese tree frog even when eaten in, we saw a similar escape behavior. On the other hand, Associate Professor Sugiura reports that when the horned beetle , which belongs to the same family as the beetle , Beetle, was fed to the frog, all 13 predated animals were excreted dead. 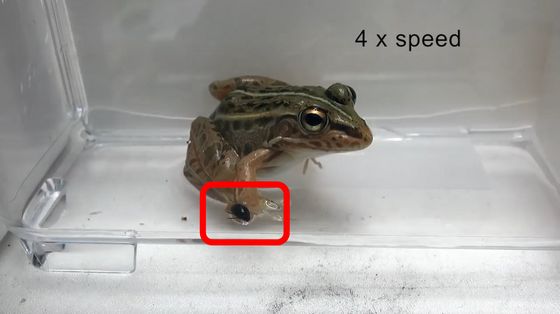 It took an average of 50 hours (minimum 24 hours-maximum 148 hours) to excrete frogs that swallowed food other than the beetle. However, it seems that it took an average of 1.6 hours (minimum 0.1 hours to maximum 3.5 hours) for the beetles to escape from the total empty space to escape. Although frogs usually do not excrete immediately after eating, the beetle may use the legs to pass through the digestive tract to encourage excretion of frogs.

In fact, when Associate Professor Sugiura fixed the legs of beetles with wax and fed them to the frogs, the beetles were not alive and excreted. 'This is the first study to document predators that deliberately escape from a predator's total emptying space and to show that predators may expel predators and accelerate their exit from the body.' , Sugiura said.

Before the experiment, Associate Professor Sugiura seemed to think, 'The paddy bugs that inhabit the paddy fields may have a defense against the major predator, the frog,' but they escape from the total discharge cavity. The method was different than expected. “I was very surprised to see a video of an insect escaping from a frog's total drainage cavity,” Associate Professor Sugiura told Live Science, a science-based media.

In addition to bugs, there are 'insects that can escape while living after being eaten by a frog'. In 2018, Associate Professor Sugiura discovered that when a frog or other insect was eaten by an insect called Myideragomid beetle , it sprayed a toxic, high-temperature 'fart' to exhale.

Found a bug that attacks and vomits the gastrointestinal tract of frogs with a 'far' | National Geographic Japan Version
https://natgeo.nikkeibp.co.jp/atcl/news/18/020900060/