The heaviest flying bird, the Condor, can fly 170 kilometers 'without flapping'. A study that records the flight of eight young condors with a tracking device shows that 'the condor can stay in the air for five hours without flapping, and can fly 170 kilometers in distance.' It was confirmed.

We tagged Andean condors to find out how huge birds fly without flapping
https://theconversation.com/we-tagged-andean-condors-to-find-out-how-huge-birds-fly-without-flapping-142472

These Giant Condors Can Fly For Hours Without Flapping Their Wings Even Once
https://www.sciencealert.com/giant-andean-condors-can-fly-for-five-hours-without-flapping-their-wings-even-once

The Condor, which lives in South America, is a giant bird with wingspans of up to 3 meters and a maximum weight of nearly 16 kilograms. Its magnificent wings spread out and fly in an arc, which is also a symbol of the Andes Mountains. According to a paper published on July 13, 2020 by Hannah Jane Williams, a researcher at the Max Planck Institute for Animal Behavior, Condor is the heaviest bird to fly. 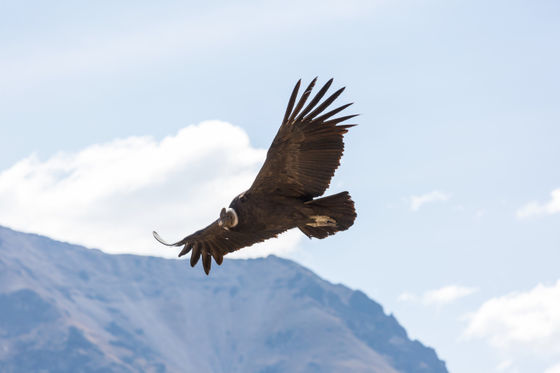 To find out 'why a very heavy condor can fly comfortably?', Williams and his team created their own flight recorder that can be worn on birds, and eight young condors living in the Patagonia region We recorded flight time, altitude, and the number of flappings.

The flight recorder attached to the condor was programmed to fall off naturally in about a week, so the research team had to rely on location information to retrieve the recorder. Sergio Lambertucci, a biologist at Komaue National University in Argentina, who co-authored the study, said, 'The recorder was sometimes dropped in a nest on a huge cliff in the middle of the Andes, so it was recovered. It took me three days, 'he said.

Analyzing a total of more than 200 hours of flight records obtained in this way, it was found that the time spent flapping the condor was only about 1% of the time it was flying, and it was barely flapping except when taking off. Furthermore, it was confirmed that one of the eight birds studied was 'stayed in the air for more than 5 hours without flapping, and flew 172 kilometers in distance.'

If you play the following movie, you can actually see the condor flying in the sky with almost no flapping.


Even storks and ospreys , known as migratory birds, are very efficient at flying condors, which fly only 1% of their flight time, compared to 17-25% of them flying. ..

Lambertucci explains why Condors can fly so efficiently: 'When they are turning and flying, they are taking advantage of the heat updraft , which is around the mountains looking for prey carnivorous meat. It's an essential ability for carnivorous animals to fly. '

In fact, analysis of flight data shows that Condor 'avoids routes that do not meet the weather conditions, such as wind strength and thermal updrafts.' 'If you land unnecessarily, you have to spend a lot of energy to take off, so choosing a landing location is very important for Condor,' said Williams.

In a treatise, the research team said, 'It is speculated that the extinct bird Argentavis , which is said to have weighed more than 72 kg, was almost gliding and flying because it could not fly continuously. Little is known about the number of flappings required for even the largest extant birds to fly, by understanding how Condor is on an invisible path in the sky. , You will be able to figure out how Argentavis was floating his body in the air. '