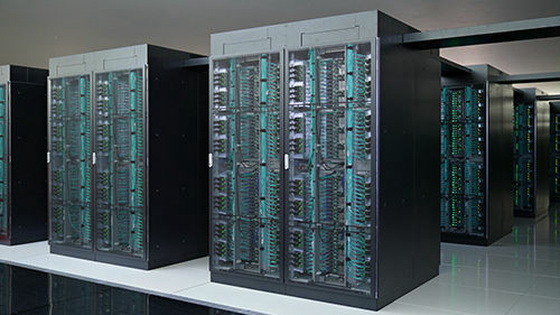 'Japan Fugaku (Fugaku)' is the world ranking to compete the performance of the supercomputer ' TOP500 ', ' HPCG ', ' HPL-AI ', ' Graph500 won the In four first place of'. The reason why Japanese supercomputers get first place in the 'TOP500' is that ' what's the reason for becoming the best in the world at the time of 'business sorting' in 2009 ? It has been eight years and a half since Kyo, which is also known to have been cut in budget due to the above-mentioned point, took the top spot in June and November 2011.

Developed by RIKEN and Fujitsu at the International Supercomputing Conference held on June 22, 2020, 'Fugaku' is a 'TOP500' that comprehensively judges the computing capacity and reliability, and actual applications such as industrial use. 'HPCG (High Performance Conjugate Gradient)', which measures the processing speed at, and 'HPL-AI', which measures the performance related to deep learning of artificial intelligence (AI), each won first place. In addition, 'Fugaku' took the 1st place in 'Graph 500', the international performance ranking of supercomputers for large-scale graph analysis held on the same day, and became the first place in 4 categories in the world.

'Fugaku' is a supercomputer equipped with a total of 152,064 A64FX, which consists of 396 racks each containing 384 ARM-based CPUs 'A64FX' developed by Fujitsu. 'A64FX' is a 52-core CPU that emphasizes power saving, manufactured by TSMC's 7nm FinFET process, the number of transistors reached 8.79 billion, tripled with the same power consumption as the comparison CPU of Intel It boasts of the performance of. This prototype version of ``Fugaku'' equipped with 768 A64FX has won the top position in the power consumption performance ranking of the supercomputer `` Green 500 '' in November 2019, and the energy saving performance of A64FX is the world's top Was shown. 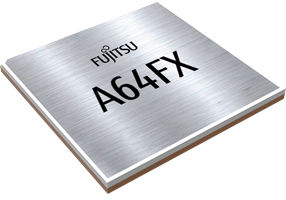 This time, 'Futake' registered in the TOP500 list achieved 415.53 PFLOPS in LINPACK performance, which is an index for ranking. I hit a score of about 2.8 times the result of 148.6 PFLOPS of ' Summit ' in the US, which won the first place last time.

The detailed specs of Tomitake can be confirmed from the following. 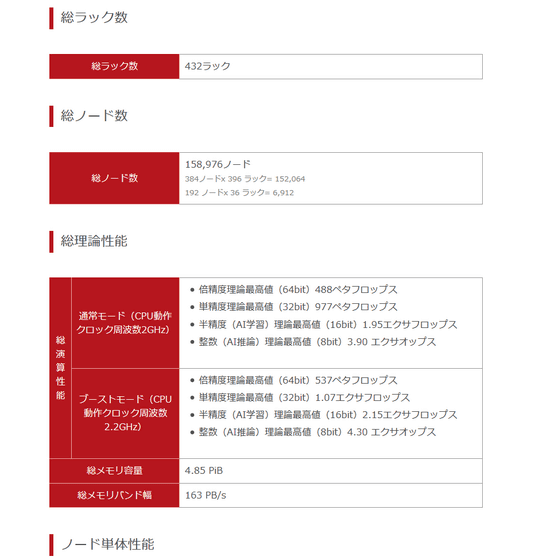 Research on new-type coronavirus infectious diseases using Tomi-dake started in April 2020 when Tomi-dake was still in the development and maintenance stage. It has been used for exploration, searching for methods that can improve diagnosis and treatment, and elucidating the spread of infection and social impact. The reason why 'Fugaku' could be used for research of the new coronavirus at the development and maintenance stage is that the A64FX is designed to run the same program as the smartphone.

In a press conference, Fujitsu's President Tojina Tokita commented, 'I think I could show the world the strength of Japan's monozukuri,' and emphasized the importance of supercomputers regarding new coronavirus research. Did.