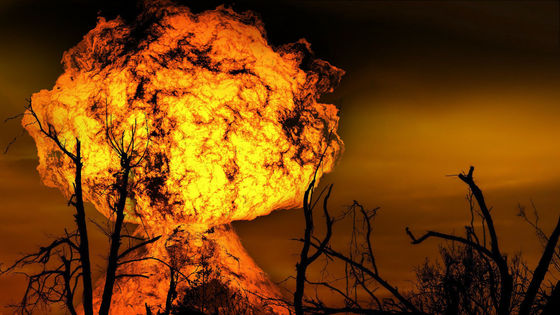 The ancient ruins of

Ter Abu Freira , located in present-day Syria, show traces of cultivating grains over 13,000 years ago and are considered to be 'the oldest example of humankind agriculture.' Research has revealed that such ruins are likely to have been destroyed by the explosion caused by the meteor.

A Comet May Have Destroyed This Paleolithic Village 12,800 Years Ago | Science | Smithsonian Magazine
https://www.smithsonianmag.com/science-nature/comet-upended-life-paleolithic-village-12800-years-ago-180974575/

The beside the Euphrates River, which flows through the northern Syria, once there was the ruins of Tell Abu Hureyra, by the huge dam construction in order to stem the flood of the Euphrates River, in 1973, Bashar al-Assad lake sank to the bottom of. Excavations carried out prior to the completion of the dam have discovered two different settlements, the Paleolithic period and the Neolithic period. Of the remains of the two eras located in the same place, from the remains of the Paleolithic period 12,800 years ago, traces of food such as grains were found along with parts of the houses and tools. Is believed to have just been about when humanity started farming. In addition, traces were found in the ruins that could be seen as a fire mixed with animal bones.

'When we unearthed Ter Abu Freira in 1973, we found a severe fire in the area,' said Andrew Moore, an archaeologist at the Polytechnic University of Rochester. In the traces of the fires found at the archeological sites, in addition to charcoal and fine particles that are generated even in ordinary fires, molten glass and ultra-small diamonds are also found. Since these were not formed by the fire that human beings at that time could cause, it was suspected that they were caused by natural phenomena such as lightning strikes and volcanic eruptions.

Below is an image of the molten glass grains found at Tel Abu Freira. Subsequent investigations have ruled out the effects of lightning strikes as they found that the molten glass had less magnetism. Moreover, since the characteristic that the water content was low was in agreement with the

tektites created by meteorite impact, Moore et al.'s research team said, ``The molten glass found from the ruins is not the volcano but the air burst accompanying the meteorite ( It was due to an air explosion) .'

Moore said of the situation in which molten glass was generated: 'At least 1720-2200 degrees is required for the minerals contained in the soil to melt.' In addition, co-author James Kennett commented, 'At such a high temperature, even a car will become a metal puddle in less than a minute.' Kennet believes that the meteorological airburst occurred right next to Tel Abu Freira, as molten glass was found throughout the Tel Abu Freira settlement. 'The village of Tel Abu Freira must have been suddenly destroyed,' Kennet said. It is believed that the air burst that destroyed Teru Abu Freira was able to vaporize the soil and plants directly under it with a destructive power comparable to a nuclear bomb.

In addition, according to the research team, area Tell Abu Hureyra is located, the Middle East and the North American continent, across the European Younger Dryas boundary layer (YDB) that there is a thing in a range of strata exists called. Traces of meteorites similar to those found in Tel Abu Freira were found in this YDB, and that Ter Abu Freira had undergone massive cooling 13,000 years ago. I also know. From such evidence, it is possible that the air burst that destroyed Teru Abu Freira was not caused by a single meteor, but by a fragmented comet.

'The airburst caused by one small meteorite would not have produced any of the material found in Ter Abu Freira. A huge collection of comet debris spans about half of the globe. There is a hypothesis that it can cause thousands of air bursts in minutes, and the YDB hypothesis proposed this mechanism and described contemporary materials spanning more than 14,000 km across the northern and southern hemispheres. We believe that our findings strongly support the major impacts caused by such fragmented comets,' he said, providing hints to the mystery of ancient climate change. I pointed out the possibility.