Pointed out that the lack of 'intellectual humility', which means ignorant wisdom, causes many problems The concept of 'intellectual humility', which calmly and openly accepts that 'mistakes occur' and 'my knowledge is limited', has been attracting attention in the field of psychology in recent years. .. It can be said that confident and decisive

Could a lack of humility be at the root of what ails America?
https://theconversation.com/could-a-lack-of-humility-be-at-the-root-of-what-ails-america-116118

In the best-selling book ' Do you need specialized knowledge anymore? ' Published in 2017, it is the knowledge accumulated by experts in each field that supports the 'deliberation based on correct knowledge' that is essential for democracy. Despite this, a warning was sounded that expertise is being neglected in modern times. The author, Tom Nichols , a professor at US Naval War College, wrote in the book: 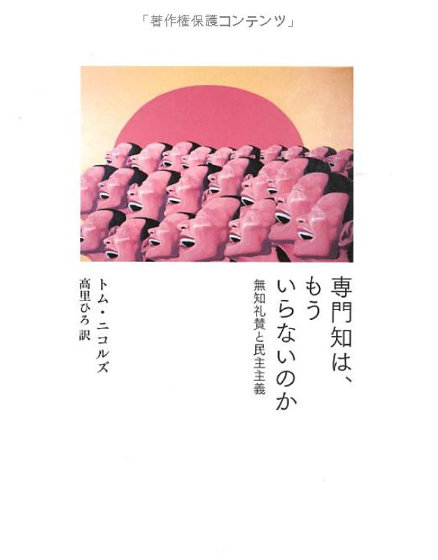 'There are older people and young people in the world, some are rich and some are poor, some are educated, some have book cards and laptops, but what they all have in common is' They are ordinary people who believe that they have a lot of knowledge. ”They know more than experts, know a wider range of things than university professors, and are more foolish than the general public. I'm sure they also have insight. '

Intellectual humility has come to the forefront of psychologist Cameron Hopkin's However, not many people have a high score for intellectual humility. When Liary asked in an experiment, 'Think of when you didn't agree in the last six months, what percentage of them thought you were right?' The average was 66%. Also, few people think that it is less than 50%.

In recent years, with the advent of social media, it has become easier to find people who share the same idea, and the

echo chamber phenomenon has made it easier to create an environment where people can easily feel that they are right. It has also been pointed out that people tend to think that they are wise when their opinions are affirmed on TV and the Internet on a daily basis. It is especially 'toxic' to continue to affirm one's opinion in this way without respect for experts.

According to Liary, religion and political party choices do not correlate with the degree of intellectual humility, but in a 2017 study, many voters were 'confident in themselves and changed their view of the problem.' It has been shown to prefer people who are 'no', so-called 'no intellectual humility', as leaders. Ironically, to better understand the high human general knowledge of intellectual humility in the study of 2018, likely to boast the intellectual talent to be 'low' at the same time is shown . It takes time for such a person to draw a conclusion because the evidence is carefully weighed, and it may be considered indecisive compared to the 'intuitive judgment type'. Leaders with high intellectual humility are also interested in why dissidents are against it. For politicians, these people are often considered the 'compromise type.' This is a weakness in an era when loyalty to the party is required.

Jeremy Peters of the New York Times points out that 'understanding the enemy's position is a forgotten technique' in modern times. The lack of intellectual humility has clearly hindered people's discourse in recent years, and the current trend of 'taking in only the information you like and not taking care of its correctness' has warned you.