Jim Keller, a genius engineer who designed AMD Ryzen and Apple A4, suddenly retired from Intel 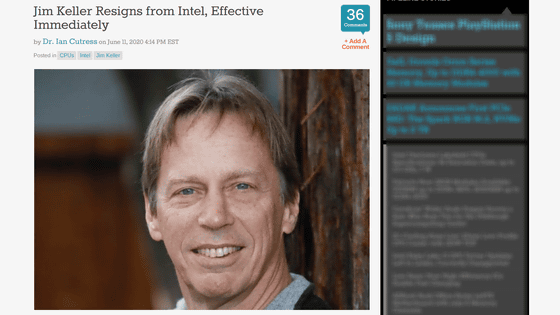 Jim Keller, who is highly regarded as a ``genius engineer'' who has been involved in the development of AMD's Athlon (K7), Zen microarchitecture , Apple A4 and A5 , retired from Intel who had been serving since 2018, Intel announced.

According to Intel, Keller left Intel on June 11, 2020 for 'personal reasons.'

Jim Keller was with Digital Equipment Corporation (DEC) until 1998, where he worked on the design of Alpha 21164 and Alpha 21264 . After that, I transferred to the chip maker AMD and worked on the launch of the Athlon K7.

He left AMD in 1999, worked as a processor development team at SiByte and PASemi, and transferred to Apple in 2008. After working on the A4, A5, and MacBook Air, he was recalled to AMD in 2012 to design the Zen microarchitecture and to work on the basic design of the Zen2 microarchitecture.

Keller, who left AMD again in 2015, moved to electric vehicle maker Tesla. Keller is said to have been involved in the development of chips for autonomous driving at Tesla. 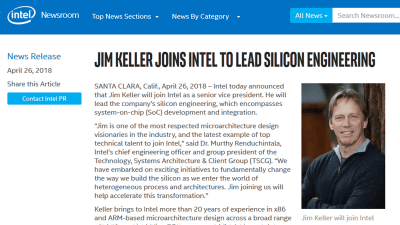 Keller has reorganized the design staff of the chip development department to streamline product development at Intel. In an interview with technology media Anand Tech with Keller shortly after the transfer, he said , ``We set up a lab to verify how SoCs work and how to characterize power performance. We are evaluating the time and quality metrics it takes to make new designs.'

Keller also said in an interview, 'Intel is already one of the AI-powered companies, with almost all software stacks running on Xeon, and we have quite a few projects underway. Development and basic work are underway, and I have my own process and methodology.' It seems that he was involved in the development of some SoC.

It is unclear what Mr. Keller specifically achieved in Intel, but it seems that the hole that Mr. Keller has gone through is large, and Intel has announced the reorganization of personnel with the change of Mr. Keller.

However, due to the contract, Keller retired from Intel, but said he will be an Intel consultant for at least six months, Intel said. In addition, at the conference on high-performance chips to be held in August 2020, ' Hot Chips 32 ', Mr. Keller plans to give a keynote speech while keeping the title of Intel employee.