How did carnivorous plants acquire the ability to catch insects? Carnivorous plants are plants that prey on insects and serve as nutrient sources, unlike the general image of plants that plants obtain nutrients from photosynthesis and soil. A study that traces the roots of such carnivorous plants has revealed a part of the secret: 'Why plants started eating insects'.

According to the research so far, 'the enzymes contained in the digestive juices used by carnivorous plants to absorb insects may have been created as a result of diverting genes to protect themselves from viruses and bacteria. Is high'. However, in order for carnivorous plants to prey on insects, it is necessary to acquire not only the ability to secrete digestive juices but also the ability to attract and capture insects. I didn't know if I won.

So, the Japanese National Institute for Basic Biology Research Group of Gergo Palfalvi et al, who studies evolutionary biology at is the carnivorous plants of the same droseraceae sundew , Venus Flytrap , aldrovanda vesiculosa genome of three types of carnivorous plants that Was analyzed and compared. In comparing the genomes of these three species of carnivorous plants, the research team paid particular attention to the phenomenon of ' genome duplication, ' which doubles the area of a specific DNA. As a result, even if one gene is mutated, the remaining gene can continue to exert its original function, so that organisms with genome duplication 'acquire new ability while maintaining original ability' I can.

Following the traces of genomic duplication in the three carnivorous plants, it was revealed that the carnivorous plants acquired the predatory ability as they are now through a three-step process. The first process occurred about 70 million years ago. Due to the genome duplication at this time, the conventional leaf-forming genes have evolved into trap-like leaf-forming genes. We also have a genomic duplication of roots that absorb nutrients in the soil and are ready to acquire another capacity.

In the second stage, a significant reduction in gene number occurred. This is thought to be because the normal leaf and root functions became unnecessary in the process of carnivorous plants acquiring the ability to eat insects, and the genes involved in such functions could be reduced. For example, mud-namo floating in the water have root remnants, but not ordinary roots that can be laid in the soil. 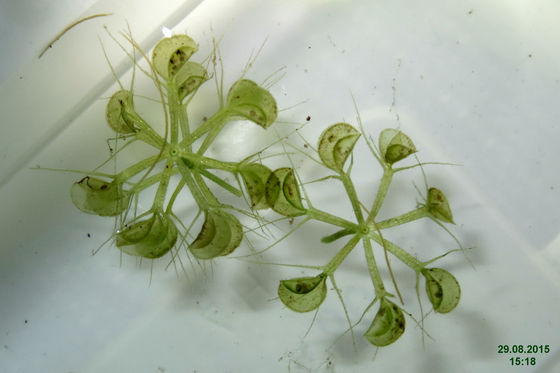 In the following third stage, carnivorous plants have evolved to further focus on eating insects. Genes that were getting nutrients from soil began to make enzymes to digest and absorb insects in earnest, and genes that made nectar to attract insects that mediate pollen produced substances that attracted prey. It became. As a result, carnivorous plants are now equipped with all the ability to attract, capture, digest and absorb insects.

Regarding the results of this genome analysis, the research team said, 'We found that the gene liberated by the genome duplication was important for the evolution of a new function called carnivorous. We are going to investigate in more detail what kind of function the gene related to sigma originally had.'