What is the result of actually testing the cognitive function by continuing to live for 4 hours sleep for 2 weeks to investigate the effects of sleep deprivation? 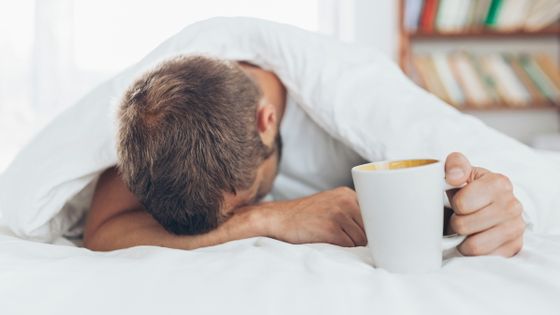 It is argued by many researchers that 'lack of sleep adversely affects cognitive function and reduces work and study efficiency', but how much cognitive function deteriorates when one actually falls into sleep deprivation There should be few people who know exactly. A blogger

Alexey Guzey who was worried about the effect of lack of sleep on himself actually conducted an experiment with a body that `` lives 4 hours sleep for 2 weeks and confirms the effect on cognitive function '' , Reports surprising results.

The Effects on Cognition of Sleeping 4 Hours per Night for 12-14 Days: a Pre-Registered Self-Experiment-Alexey Guzey
https://guzey.com/science/sleep/14-day-sleep-deprivation-self-experiment/

Cognitive decline due to sleep deprivation is one of the most well-studied topics in sleep science and is widely known to the general public, not the researchers. In particular, research results such as 'People who sleep for 6 hours a day have the same degree of cognitive decline as those who stay up all night' 'It is difficult to notice the decline in cognitive function due to lack of sleep' It's an interest. Guzey is one of those who has deepened his interest in sleep science, and decided to conduct an 'experiment to examine the effect of sleep deprivation on cognitive function using his own body'.

First, Guzey decided to spend 8 hours from 23:30 to 7:30 during the week before the experiment to prepare her sleep before the experiment. Although he could not spend all of his allotted time to sleep, he was able to sleep about 7.78 hours per night on average. Guzey does not have any medical, psychiatric, or sleep-related disorders, and it seems that he has not been engaged in night work or shift work for the past two years, reversing day and night for the past 3 months. I had never done it.

After sleeping 8 hours a day for a week, Guzey started an experiment where he lived for 4 days with 4 hours sleep from 3:30 to 7:30 for 14 days. During the experiment, naps were prohibited, and a test to check cognitive function was conducted at the end of the experiment. Guzey did not consume caffeine, alcohol, cigarettes, or medicines from 2 weeks before the experiment started to during the experiment period, and he only had a meal between 12:00 and 20:00. I did not provide it. During the day, he spent time working, playing video games, watching movies, surfing the internet, reading books, etc., but he never went outdoors and did not exercise vigorously or sunbathe. 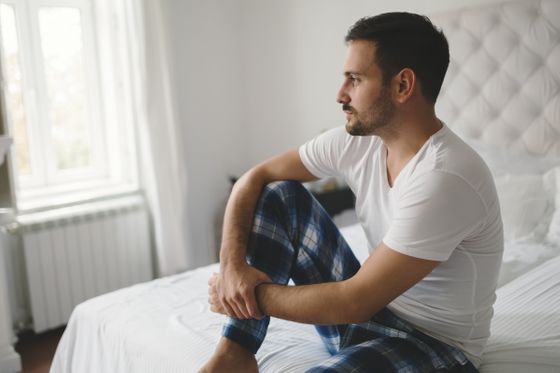 Guzey investigated the difference in cognitive function between sleep deprivation and normal times, the day before starting 4 hours a day of sleep, the 12th day, the 13th day, the 14th day after starting a 4-hour sleep a day, and After the experiment was completed and the sleep time was increased, a cognitive function test was conducted for a total of 6 days on the 4th and 5th days. Guzey performed three tests as a test of cognitive function: Psychomotor Vigilance Task (PVT), guzey_arena_0, and

'PVT' is a simple awakening survey in which a user watches a monitor that is about the size of a tissue box and presses a button in response to a randomly lit light. The PVT, which is commonly used in awakening studies, fails if the reaction is too slow and the test runs for 10 minutes in a row. 'Guzey_arena_0' is an FPS game developed by Guzey. It searches 20 enemies randomly appearing around the arena and kills them as soon as possible. According to Guzey, by using this game for cognitive function tests, it is possible to test the reaction speed to the enemy, tactical thinking ability to track the enemy, detailed work ability using the keyboard and mouse. The 'SAT' is a three-hour test of language and mathematics that is taken by hundreds of high school students every year. 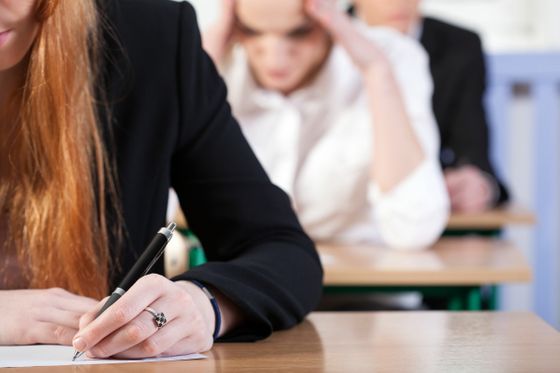 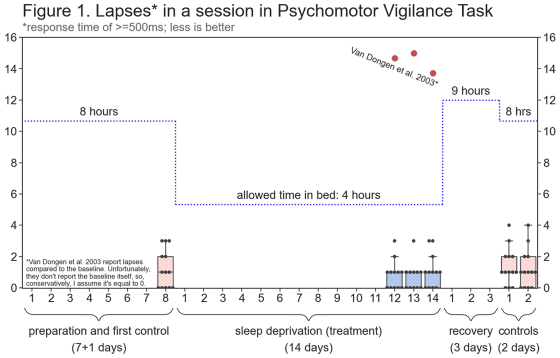 This is the result of 'guzey_arena_0'. Again, there is no statistically significant difference. 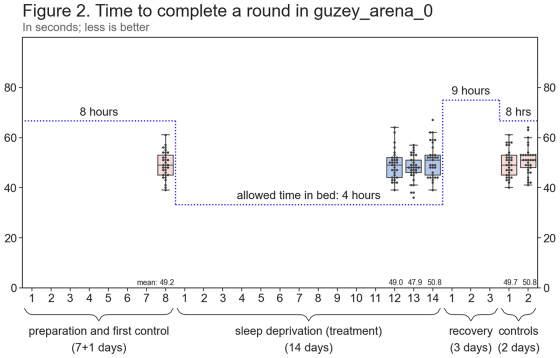 The 'SAT' results also showed that cognitive function did not change significantly between normal times and sleep deprivation. 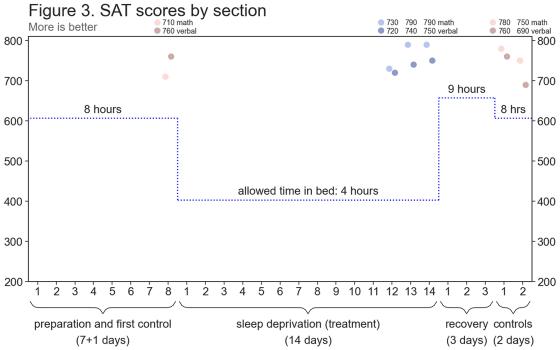 Guzey seems to have been confused by the fact that he should not have enough sleep, but his cognitive function is not significantly affected. Before starting the experiment, Guzey hypothesized that 'In monotonous and boring' PVT 'I will accidentally fall asleep or distract and the performance will decrease, but with the interesting task' guzey_arena_0 'the performance does not decrease. However, the PVT test did not show any significant cognitive decline.

In the cognitive function test conducted by Guzey this time, it was suggested that 'there was no significant decline in cognitive function during sleep deprivation'. On the other hand, Mr. Guzey during the experiment said that he spent roughly 85% of his time awake while he was fully awake, and 10% while feeling drowsy. And 5% seemed to have had a drowsiness that was almost sleepy, and said that they had returned to awake state by playing a video game for 15 to 20 minutes.

Also, Guzey had a complicated discussion about academic papers with friends for about an hour on the 10th day after starting to sleep 4 hours a day. After this discussion was over, Guzey asked a friend, 'It's been 10 days since I started sleeping for 4 hours a day. Did you notice anything?' A friend replied to this question, '(laughs) I didn't notice it at all.' Also, when I asked a roommate who knew the existence of the experiment, 'What did you change during the experiment and after the experiment?' 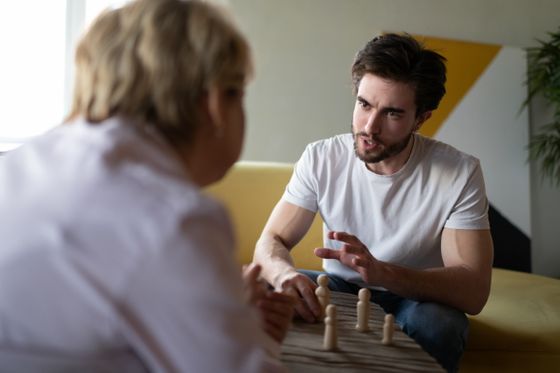 Even so, sometimes he didn't even have the energy to play video games, he fell asleep for a few seconds, or fell asleep for a few minutes while sitting on a chair. 'I wouldn't think I could have kept this schedule for 14 days if I hadn't had a great deal of time to design the experiment and publish the results,' Guzey admits, in fact. He said it was very difficult to stay asleep for four hours.

The results obtained in the series of experiments are only samples of Mr. Guzey, and the data quality may not be so high. Also, Guzey says in the first place, `` I like what is happening, I do not like sleeping '', admitting that I had a motive to discover that lack of sleep does not adversely affect cognitive function. .. Guzey points out that this may have been the motivation for getting a high score on the cognitive function tests taken during periods of sleep deprivation. In addition, although he did not lose much of his physical condition during the experiment, it seems that he did not closely follow his health condition. 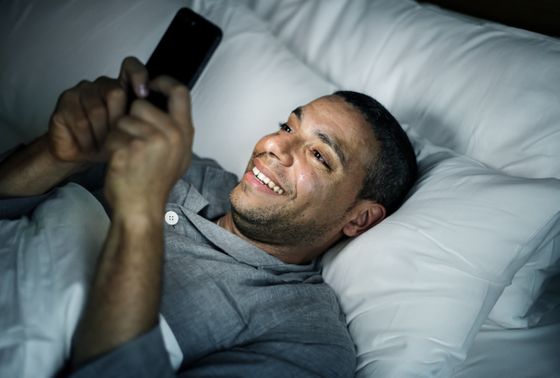