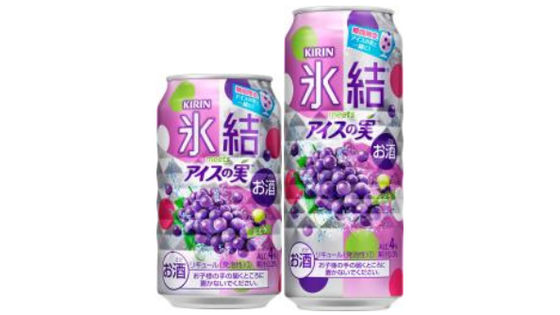 A collaboration product `` Kirin Hyakuyu meets Ice Fruit '', which is a popular grape flavor from Ezaki Glico's `` Ice Fruit '' and arranged in the way of Kirin's Chu Hai `` Ikyuu '', will be released on June 16, 2020 (Tuesday). .. The collaboration is the second time since 2019, and pursuing the deliciousness of 'putting ice fruit in Chu-Hi' which is popular in the street, it is said that it has a taste that you can enjoy a rich fruit juice feeling. The alcohol content is 4% and both 350ml and 500ml cans are sold at the open price.

Why shouldn't the number be divided by '0'? -GIGAZINE

Godzilla can be seen from the window of the house next door, so when I was facing the gamera, Godzilla turned to me one day. pic.twitter.com/k2JWgUOWj4

I made conveyor belt sushi (Kura sushi) with Plarail. pic.twitter.com/QU7g2R2HFT

This is the worst shelf I found at a bookstore today pic.twitter.com/redZgURM3L

Go board that has been checked as a junk item without operation pic.twitter.com/rFqMxPGsSN

Mr. Hashibirokou and Pelican suddenly opened their beaks wide and put out unidentified things. Did you know that this is their 'spine'? pic.twitter.com/UGn8Ki2MBx

Dani, extinct with Japanese crested ibis that has completed to the end: Asahi Shimbun Digital

Each paper this morning is spectacular. Yomiuri, which has been reported in small articles so far, is also the top page following yesterday's 'Send off consideration'.

However, it is significant that the government did not withdraw the special case of extension of retirement and continued deliberation. The arrogance of forgetting public opinion in the autumn is transparent. The problem has not been resolved, and we will continue to pursue it. # Prosecutor's office law revision proposal abolished pic.twitter.com/XXdzryZCqa

Prime Minister will give up to 200,000 yen to students who have a difficult life | Cabinet decision on 19th | NHK News

Home electronics mass retailer that must wear a mask Sold to a forgotten boy for '3,990 yen' |

5 new infection confirmed in Tokyo, the smallest new corona since the declaration of emergency | NHK News

This morning, Yomiuri's report on 'Considering the prosecution's bill send-off' was focused on the fact that if Prime Minister Abe's views on Yoshiko Sakurai became the focus and the Ministry of Justice announced the facts, it was decided that the resignation of the prime minister would be unavoidable. Isn't it? Therefore, I think that the truthfulness of this word of Prime Minister Abe must continue to be thoroughly pursued. https://t.co/0z2xZaYg3k

Learning app error series / Use of half of Benesse high school

◆ Lifestyle (life / life / health)
'I have diarrhea every time after eating.' A person who has a healthy bowel but is prone to diarrhea after eating, gave advice on Twitter. The frequency of diarrhea decreased 'I understand this!'-Togetter

[Tips for fluffy egg soup]
① Turn off the heat when the soup is boiled ② Stir in one direction to create a water flow ③ Rotate backwards and add the beaten egg → The egg will be fluffy, like a heavenly girl's coat. The appearance and texture are different.

It was 'Middle and Much faster, better known, and better!' pic.twitter.com/wlpSZQhLuz

The washing does not become painful pic.twitter.com/t2CQYsu1Ly

I tried to cook Funawa potatoes with unsalted butter.
It's a sinful taste, but I'm telling you that it's official. It can not be helped. pic.twitter.com/UZ96Rmns01

Finally, Daiso started selling Daiso masks normally, so it may be good to see that the lack of masks is completely ending # mask price collapse pic.twitter.com/amInhnFlzQ

Walking has Once small puddle or a thinks Ya by the Akankohan ... Although the wooden sticks that I found the Swamp bottomless there was more than 180cm was not attached to the bottom pic.twitter.com/3EkGjDg6ay

The supermarket 'with creamy cheese and porcini' is full of scent of mushrooms. https://t.co/uBCK3iYum4

When I woke up at the bedside in the middle of the night with a loud noise, '... Miss ... Misimi MiMiMi ... Bakotsu!', The Chinese tablet I bought a few years ago (uncharged) was torn. Wow, battery pan and pan.
It was really good because it didn't matter. pic.twitter.com/logTJs7Knz

Who will kill the work? | A reader | note

The cumulative sales volume of the DARK SOULS series has exceeded 27 million. It's a great honor for many people to play. We are developing a new title so that everyone can enjoy it again, so I hope you can expect it. pic.twitter.com/utwl6Se97J

If you experience from Kazuya Minekura's assistant to the comicalization of God Eater, the face of the warrior is full of scratches, the stones are flying in front of the camera and I can not feel unless I crack the floor pic.twitter.com/5Zz4BJkjmI

Hello Kedomo'm sensitive system groupie old hag on the tag of the fashion! !
I didn't really understand it in a challenging spirit, but I drew it!
What do you mean! ? is this okay! ?
I'm not sure, but I became Ryo-chan who put in a Sailor Moon MOD, but I wonder if it fits! ? #sailormoonredraw pic.twitter.com/wdChHwoMgm

The one who drew Party Parrot with a function, which he said 'wasting his talent', may not be a waste of technology.
Comparing with the conventional method (video created by the principle of so-called 'flip-book manga'), we can see that the proposed method is slimmer. #Variable t pic.twitter.com/iuSu7pTZ0M

White colored with a single blow, and the silver and silver staff worked as a paint maker and said, 'A marker can paint such a beautiful metal color !?' We hope you will experience the power of the Mackey Paint Marker. It's interesting. #nippper https://t.co/QiDc7K4hET pic.twitter.com/0pGtVwPnen

#Air Committee #COMITIA
It has passed the time, but it will be open to the public for about a week.

In the brain when doing Apex, it is like this pic.twitter.com/8A9xXvSatG

Son who stopped taking a nap and the solution (1/3) pic.twitter.com/NPOfrUtHQR

It is a story when I stayed in a lounge wear all the way through the stay home and adjusted makeup and grooming for the first time in a month #Isho Pin 5 `` Why I am cute '' 1/2 pic.twitter.com/LkYUtEQyub

Doraemon stamps released tomorrow at the post office are super cute, so please get everyone https://t.co/3fUzuVoDiR pic.twitter.com/VC45MOeMX1

It seems that there are holes in the space ... pic.twitter.com/hHLxNmq0IZ

I drew Party Parrot with a function. It works by changing the value of the variable t. The color changes.

I will put a desmos link on it so please give it a try.
↓↓↓ https://t.co/9h7aA4K8xJ pic.twitter.com/SiP2SDvOTX

There was such a review when I was thinking of purchasing an additional Switch programming console on Amazon Σ (゚ Д ゚)
I'm not sure how to put the individual review link, so I'm sorry for squeaking pic.twitter.com/1mMpr1dlqq

I made a vtuber Tsukinotomi Usagi with a paper cup. # Paper cup vtuber # Mitoart pic.twitter.com/XSVL8Res4o

The story of the greatest luck in life
# Hashtag that can read manga # Strong dialogue pic.twitter.com/qWNHNLaSYl

I think it's each, but it's nice to have them like you pic.twitter.com/k0hWwTgjsZ

Even if you reuse the perspective line almost completely, you can make a completely different picture pic.twitter.com/a4QwzSIFlo

Perfect one's only fault picture I made into a picture diary pic.twitter.com/09cr1pVqRQ

The scene that Hideaki Anno was most impressed with at Sailor Moon was the transformation story of episode 34, where the rabbit turned his face red.
The reason seems to be that 'during the crisis of life, the rabbit made the decision to show Mamoru naked for the first time, and touched the chord of his heart.'
.. pic.twitter.com/4oUpXuyvMs

What is scary with the hit of the devilish blade, it is a fact that there is 3.5 million copies until it is animated even though the cartoon with the potential to sell 60 million copies is serialized on the Champs-Elysees in the manga world called Weekly Shonen Jump. .. Even parallel paradise is nominally 2.2 million copies. It's an era in which even if serialized in Jump, it won't stop in the eyes of the general public. scared.

Balalaika & not to eat & not to do-Nico Nico Douga

Ngo is a garment-Nico Nico Douga

[To everyone who supports us from Ryunosuke Kamiki] pic.twitter.com/fkJpdyhLmJ

A few years ago, when I got an interview because I wanted to become an employee of Yoshimoto, pic.twitter.com/pSIYG6NvpI