Middle Jurassic tracks of sauropod dinosaurs in a deep karst cave in France: Journal of Vertebrate Paleontology: Vol 0, No 0

What It's Like to Find Prehistoric Dinosaur Tracks on the Ceiling-Atlas Obscura
https://www.atlasobscura.com/articles/dinosaur-tracks-cave-ceiling

The group moved about 100m along a narrow and frequently flooded road, reaching a wide space of about 80m long, 20m wide and 10m high, about 500m underground. Jean-David Moreau , a paleontologist who entered the Castelbouc cave as a member of the cave exploration group, discovered a strange thing when he looked up overhead and called out the guide in a loud voice.

'We found a huge circular structure just above me,' Moreau said. 'We were in front of the first imprint of a giant herbivore found in a deep natural cave.' He said. Thousands of people have gone through the Castelbouc Cave and past the fossils of this footprint, but nobody noticed the traces on the ceiling. 'Even if only one person looked up at the ceiling and looked closely, I could clearly see the footprints that were supposed to be created by a huge dinosaur,' Moreau said.

Since it was difficult to identify all footprints with the light of the headlight alone, Moreau and his colleagues entered the cave several times to investigate fossil footprints. As a result, it was revealed that there were 3 rows of footprints with a length of 20 m, and the maximum size of each footprint was about 1.25 m. Lord is dinosaur footprints is speculated that it was 30m class size, the research team is a huge herbivorous dinosaurs of the four-legged

Ryuashirui a kind of, titanosaur we believe gave a footprint. In addition, the age of the footprints is about 168 million to 166 million years ago, which is the middle Jurassic period .

In the first place, before the discovery in the Castelbouc Cave, there was no case that a huge fossil footprint of a dinosaur was found in the cave, and the series of discovery seems to be very amazing. In addition, there are dozens of fossil excavation sites in the Kors region, which extends across the provinces of Lozere, Aveyron , Gard , and Herault , but no traces of huge herbivorous dinosaurs such as sauropods have been found. It may seem strange at first glance that fossil dinosaur footprints were found on the ceiling of the cave, but this does not mean that the former ground rotated 180 degrees to the ceiling. The footprint fossils found in the Castelbouc cave are not hollow but convex. Convex footprint fossils are made by depositing mud and other sediments in the depressions created by the footprints and then fossilizing the sediments deposited on the footprints over a long period of time. After that, when water eroded limestone and made a cave, it eroded leaving behind the fossilized part, so finally footprint fossil appeared on the cave ceiling, Mr. Moreau explained. 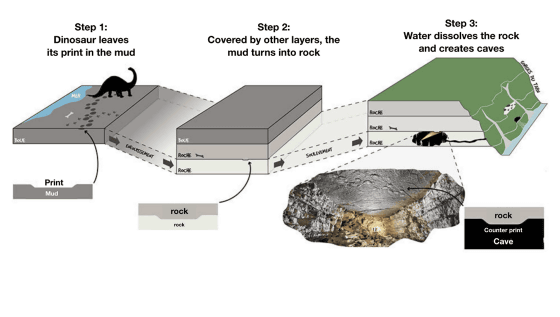