In the wake of the new coronavirus infectious disease (COVID-19) crisis, countries are beginning to focus on 'information warfare.' The U.S. Federal Bureau of Investigation (FBI) and the Department of Homeland Security (DHS) will soon warn that 'China is trying to use spies and hackers to steal COVID-19's vaccine and drug secrets.' Said the New York Times, an American letter.

According to The New York Times, the FBI and DHS are about to announce a warning that 'China is illegally stealing intellectual property and public health data on vaccines, treatments and tests.' The Trump administration considers that researchers and students are making a leap to steal data from universities and private laboratories, and this kind of information thief is circumvented as `` Nontraditional actors ''. I am doing it.

The New York Times said warnings to China will be made in collaboration with the US Cyber Force and the US National Security Agency . The New York Times notes that the Trump administration has consistently accused China of being responsible for the outbreak of the new coronavirus on a global scale, and that this warning is part of that. 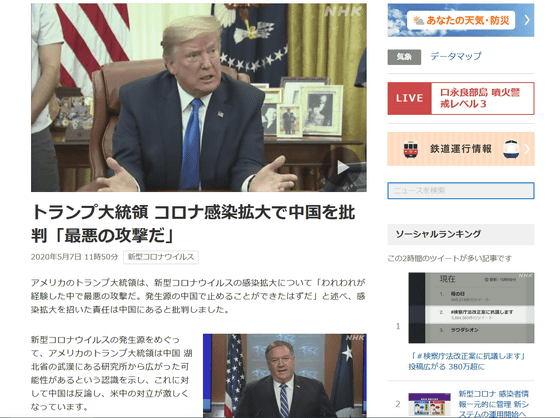 On May 5, 2020, the US DHS, the Cybersecurity and Infrastructure Security Agency, and the United Kingdom's National Cybersecurity Center will jointly reach out to medical institutions, drug companies, academic societies, medical research organizations, and local governments. It had issued a joint statement that there was a large-scale cyber attack. Although the joint statement does not include a specific state name, The New York Times says, 'In terms of expression, this attack has been based on previous cyber attacks by Russia, China, Iran, North Korea and others. It is implicitly suggested that it is a country that is actively engaged in.

Above all, there is strong suspicion that Iran has launched a cyber attack against the manufacturer of the new corona treatment drug 'Lemdesibir.' But security experts say that China, Russia, and Iran aren't the only ones to intensify this type of cyber attack. Israeli security officials have announced that Iran has launched a cyber attack on rural water systems. According to sources, Vietnam has been carrying out cyber attacks against Chinese authorities for several weeks, and South Korea is conducting cyber attacks targeting the World Health Organization, North Korea, Japan, and the US ally. ..

The New York Times pointed out that hospitals that do not have the power to devote to cyber security and companies that allow access to corporate networks from the outside to support work from home are targets of the attack. Nigerian civilian cybercriminals have also taken advantage of the COVID-19 turmoil, mentioning that they are profiting from scams related to the new coronavirus and information theft on the dark web.