Jurassic Park ' is a panic suspense movie in which humans are attacked by a dinosaur that has risen to the present day. Among the dinosaurs that appeared in the work, Raptor, a small carnivorous dinosaur, appeared as a person who hunts down humans with high intelligence and collective action. However, a research team at the University of Wisconsin shows that the dinosaur Deinonyx that modeled this raptor may not have actually hunted in a flock.

You can see the scene where children are chased by Raptor at Jurassic Park from the following. The raptor is a fictional dinosaur modeled after ' Velociraptor ' in the original novel, and Deinonyx is used as a visual model in the movie.


Our energetic research updates our knowledge of dinosaurs year by year. The Jurassic Park, which was released in 1993, reflected the theory that was supported at the time, so the Raptor had a lizard-like skin and had no visual hair. However, it was shown that the velociraptor, from which the name was derived, was covered in feathers by a fossil discovered in 2007 in Mongolia. In addition, although no evidence fossils have been found for Deinonyx, it is considered that feathers had grown from the systematic point of view at the time of writing the article.

The following image is a predicted figure of Velociraptor with feathers on the whole body. 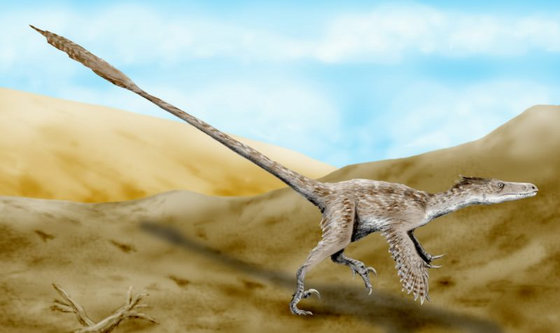 Below is a picture of Deinonyx that looks like a bird.

Also, at the time of the movie release, there was a theory that Velociraptor and Deinonyx were the same species, but this theory was denied later, and it is said that they are different species although they are related species.

Furthermore, it was thought that 'Deinonyx was hunting larger creatures than themselves by swarming like wolves,' so this was strongly reflected in the description of Raptor at Jurassic Park.

However, Joseph Frederickson, a paleontologist at the University of Wisconsin-Fox City and director of the Weiss Earth Science Museum , said, 'There is no solid evidence that Deinonyx was hunting in herds. We need to indirectly define their living behaviour, as it is invisible. '

According to Frederickson, birds and crocodiles, descendants of dinosaurs, do not hunt in swarms and rarely hunt larger prey than themselves. Frederickson suspected that Deinonyx had behaved like a Komodo monitor lizard . In the case of hunting animals such as wolves, because adults feed their children separately, adult and child diets rarely change. On the other hand, Komodo monitor lizard is an ecology in which dietary habits change with growth. Komodo lizards usually feed on birds and snakes, as well as large mammals such as boars and goats. However, in the early childhood, when they cannot hunt by themselves, they hide on trees so that other animals cannot eat them and eat small insects and geckos. Frederickson suspected that Deinonics might change its diet by growing, so he examined the teeth of Deinonics who lived in North America 150 to 108 million years ago. As a result of investigating the water sources from carbon and hydrogen isotopes, it was found that what was eaten by fossil teeth was different from what was eaten by the teeth of children and adults. As expected, it was suggested that eating habits may change significantly with growth. For this reason, Frederickson argues that it is unlikely that Deinonyx was hunting in herds.

Frederickson said, 'We found a similar pattern in Velociraptor, where children and adults had different carbon isotope values and were eating different foods. It shows that it was not fed, which means that Jurassic Park was mistakenly drawing about Raptor's actions. '