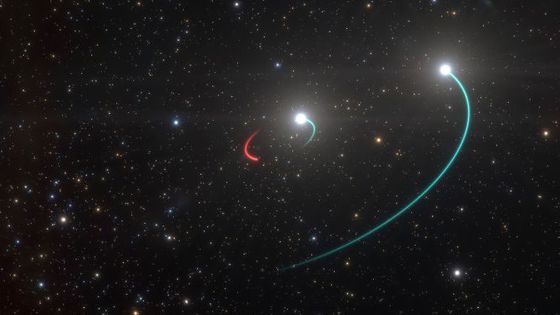 Black holes are extremely dense and gravity-rich objects that cannot swallow the surrounding stars and even escape the light. A research team at the European Southern Observatory , jointly run by 14 European countries and Brazil, has announced that it has found the 'black hole closest to the solar system', just 1000 light-years from Earth.

Astronomers discover closest black hole to Earth. And you can 'see' it. | Live Science
https://www.livescience.com/closest-black-hole-to-earth-discovered.html

The research team initially, the two stars are orbiting around the center of gravity of the two binary stars as part of the research on, telescopium had observed a binary star of 'HR 6819' in the. HR 6819 is a 5th magnitude star and can be seen with the naked eye from the earth if conditions are right.

When we analyzed the orbits of the binary, the binary showed a strange orbit as if it was pulled in an oblique direction to the orbit. Therefore, the research team seems to have made further observations with the telescope called

MPG / ESO 2.2-metre at the La Ciya Observatory in Chile. Then, it turns out that the orbit of HR 6819 is not that two stars orbit around their centers of gravity, but that three celestial bodies affect each other's orbit. I also found that the third celestial body had at least four times the mass of the Sun, but I could not observe its appearance.

'There is no other invisible object that has at least four times the mass of the sun as a black hole,' said Thomas Rivinius , a researcher at the European Southern Observatory. The research team reported that HR 6819 was not a conventionally known binary star, but actually consisted of three celestial bodies including black holes. 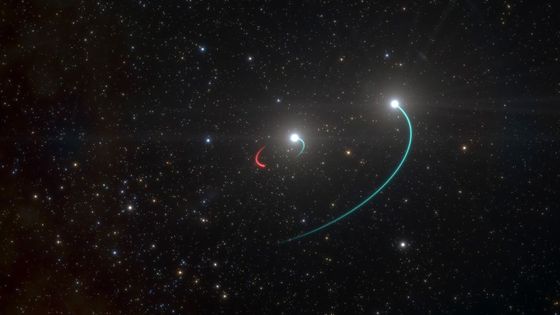 X-1 constellation, 3300 light-years from Earth. However, HR 6819 is only 1000 light years away from Earth, so the black hole discovered this time is the closest black hole to the solar system. In addition, according to the analysis of the research team, the black hole of HR 6819 seems to have a minimum mass of about 4.2 times that of the sun, and it may be the black hole with the smallest mass discovered.

The reason why the black hole of HR 6819 has not been discovered so far is that the black hole itself has a small mass, does not absorb surrounding celestial bodies, and does not emit detectable X-rays. I can mention. However, this discovery suggests that by discovering 'a star with an unnatural orbit', it is possible to discover an unknown black hole that is not vigorously active.

Rivinius said, 'There should be hundreds of millions of black holes in the galaxy, but we know only a small part of them. Knowing what to look for is a key to finding black holes. We will give us an advantage. '

It is important to study the interaction in a binary star including a black hole in order to understand the mechanism that causes the collision of black holes and neutron stars. The black hole of HR 6819 may also be an important hint for LB-1 , a huge star black hole that should not exist in nature, discovered in 2019. 'We have also noticed that the LB-1 could also be a triple star like the HR 6819,' said Marianne Heida , a researcher at the European Southern Observatory, said in a black hole on the HR 6819. We argue that we need to make further observations based on our findings. 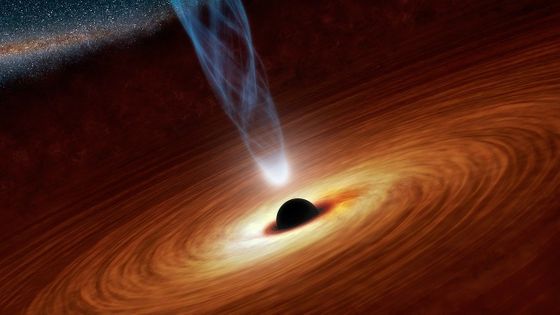