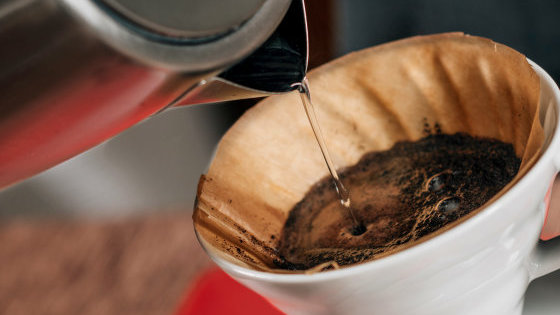 Coffee has long been said to be “healthy,” but recent studies have re-evaluated

it . A new study investigates the relationship between 'coffee extraction methods' and 'heart disease and mortality risk,' and followed more than 500,000 people over the past 20 years, concluding 'the best coffee for health' It is being done.

How to make the healthiest coffee during COVID-19 lockdown | EurekAlert! Science News
https://www.eurekalert.org/pub_releases/2020-04/esoc-htm042120.php

Almost 30 years ago, Professor Dag S. Thelle, an epidemiologist at the University of Gothenburg in Sweden, found a link between drinking coffee and raising total and bad (LDL) cholesterol levels. It was. Generally, bad cholesterol is said to increase the risk of heart disease.

Results of the investigation, Thelle professor is 'material to raise the cholesterol levels' that is included in the coffee, increase the blood lipids kahweol and cafestol identified as being. He found that coffee filters could remove these substances. Coffee that has not been filtered has the concentration of these substances 30 times higher.

Professor Thelle wondered if drinking coffee could lead to a heart attack or heart disease, but it was unethical to examine this in a randomized comparative experiment, and 'a large number of people' were tracked for a long time. I thought that I would get the result by doing 'survey'. Researchers conducted a survey of 508,747 healthy men and women between the ages of 20 and 79 between 1985 and 2003. Subjects answered a questionnaire about the type and amount of coffee they were drinking. The analysis takes into account smoking status, educational background, physical activity, height, weight, blood pressure, cholesterol level, etc.

Analysis showed that those who had coffee that had been filtered had a 15% lower overall mortality risk than those who did not. Also, when it comes to the mortality rate due to cardiovascular diseases, 12% of men and 20% of women who were drinking coffee using a filter had a low risk of death. It has also been shown that the coffee with the lowest mortality rate is '1 to 4 cups'.

'The results of this analysis cannot be explained by variables such as age, gender, and lifestyle,' says Thelle.

It should be taken into account that the results of this study are observational studies, but Professor Thelle said, `` If you are aware of high cholesterol levels and want to get rid of it, coffee without filters, such as the

French press It is better not to drink. '