Is the spread of the new coronavirus at risk of the end of the world? 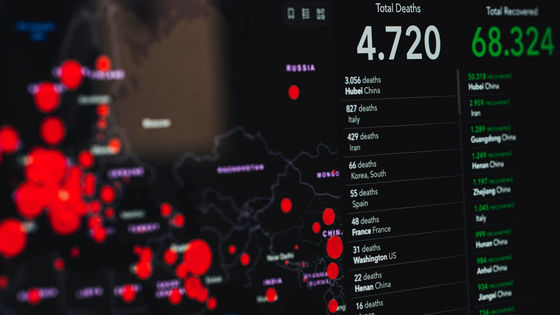 Of the Internet encyclopedia that users around the world there is a has been that 303 language, also all language cumulative 38 million pages of articles created by gathering the wisdom

Wikipedia , the name 'World end of the crisis (Global catastrophic risk).' Page exists. A new coronavirus infectious disease (COVID-19) , recognized by the World Health Organization (WHO) as a pandemic on March 12, 2020, falls into this `` crisis of the end of the world '' Is not it.

According to Wikipedia, `` crisis of the end of the world '' is `` a fictional event that may happen in the future that humans may impair well-being on a global scale (PDF) , jeopardizing modern civilization or worst case Can be destroyed . ' Wikipedia says, 'While a global catastrophe could kill most of life on Earth, humanity still has potential to recover.'

The following graph classifies `` crisis facing humanity '' according to risk according to the research paper `` (PDF) Existential Risk Prevention as Global Priority '' published by Nick Bostrom of Oxford University in 2013 . The vertical axis of the graph indicates the 'range of influence' and the horizontal axis indicates 'severity', and the pink area corresponds to 'crisis of the end of the world'. The vertical axis indicates 'Personal', 'Local', 'Global', and 'Trans-generational' (from generation to generation) in ascending order. They are 'Imperceptible', 'Endurable' and 'Terminal'. A crisis of the end of the world applies to those with a scope of impact equal to or greater than the size of the world, and a severity greater than or equal to 'tolerable.' 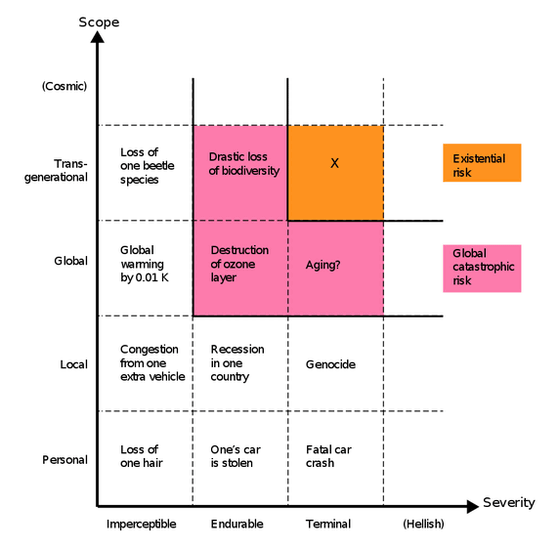 For example, in the “technology” category, “the possibility that AI will be against humanity” is cited as the crisis of the end of the world. Tesla and founder of SpaceX, Elon Musk, have repeatedly stated that AI is a threat to humanity, and have been intensely debated with Facebook's Mark Zuckerberg in the past. 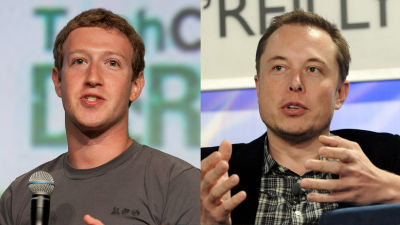 Biotechnology items in the crisis of the end of the world include: 'Biologically engineered organisms such as viruses, bacteria, fungi, plants, and animals can cause a catastrophic crisis on a global scale.' The catastrophic consequences of biotechnology are the unexpected and catastrophic impacts on nature and agricultural ecosystems due to the accidental release of genetically modified organisms from controlled environments and the planned release of biological weapons. Can cause significant interactions. ' In the case of pathogens, genetic alterations may have been made, intentionally or unintentionally, to alter virulence or other characteristics.

However, regarding the new coronavirus, researchers have published a paper stating that 'the new coronavirus has been suggested to have evolved in the natural environment, and there is no possibility that it was produced by any operation in the laboratory' Therefore, it seems that it does not apply to 'artificial crisis'. 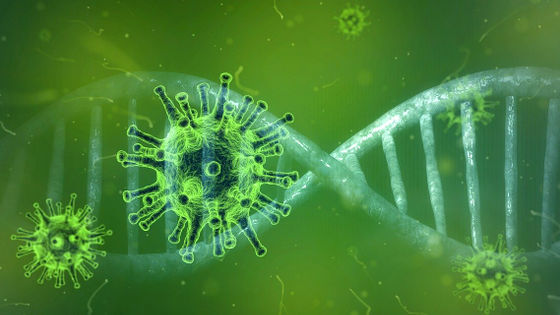 On the other hand, there are six types of 'anthropogenic crises': ' effects of asteroids ', ' threats from space ', ' extraterrestrial invasion ', ' pandemic ', ' natural climate change ', and ' volcanic activity '. . The new coronavirus is classified in the 'pandemic' category.

In fact, the new coronavirus infection has been certified with the pandemic from the WHO, in an article creating the time of the worldwide infected people the number of total 720,000 people have been exceeded, also except for the crew passengers of a cruise ship in Japan infection The reported number is 1896 . Comedian Ken Shimura has died of pneumonia associated with a new type of coronavirus infection. On March 29, 2020, 68 new cases were confirmed in Tokyo, and the situation is still unpredictable.

WHO recognizes new coronavirus infection as a pandemic, 11 years after new influenza in 2009-gigazine 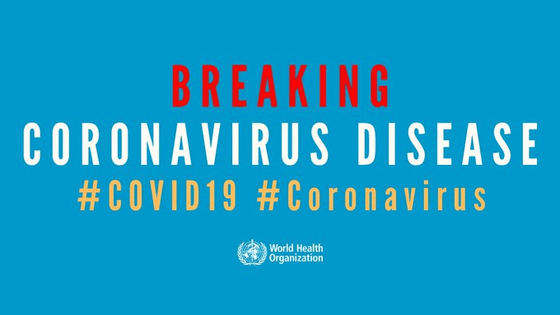 Wikipedia states, 'Currently, people are moving at an unprecedented scale and speed, making it more difficult than ever to contain infectious disease epidemics in regional quarantines. Other uncertain causes And risk mean that the natural pandemic of the virus can pose a real threat to human civilization. '

He also notes that the pandemic is that 'historical pandemics occur only on a limited scale, so it is unlikely that a larger pandemic can occur than in the past. And 'changes in risk due to changes in behavioral patterns,' 'limited historical records,' 'artificial bias,' and so on. 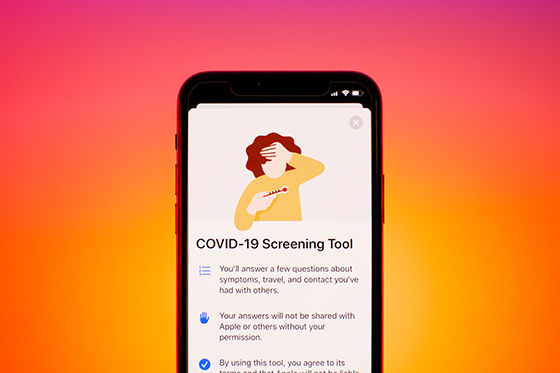 Based on these classifications, the new coronavirus clearly appears to fall under Wikipedia's definition of 'the end of the world.' However, according to Bostrom's study in 2013, 'Existential risk' was cited as a more serious threat than the 'end of the world crisis.'