Procedures for reading the protected area of the microcomputer using 'processor exception handling' are available, and source code is also available Important data of microcomputers is usually protected by a “read protection function” that restricts data reading, but ways to avoid this function are being researched and developed daily by security researchers and others. Embedded engineers Marc Schink and Johannes Obermaier have posted on their blog how to bypass the protection of one of the microcontrollers, the

In the STM32F1 series, an attacker can use the debug function if physical access is possible. When an exception occurs in the program, the processor also reads the exception processing address indicated on the vector table to the program counter (PC) at the same time.To make this reading possible, the read protection function of the STM32F1 series It targets only the DCode bus and does not block memory access from the ICode bus. By using the processing of the ICode bus, read-protected information can be read.

It seems that the method of 'adding an exception to the vector table' is a method that exploits a general vulnerability, but this method can not be used because there is no space in the vector table in the STM32F1 series. 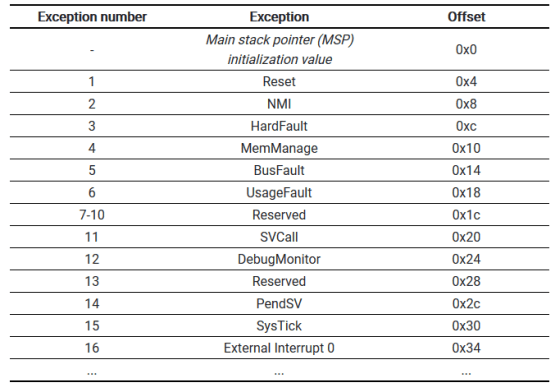 Explains how to raise an exception. First, it is necessary to use an

OpenOCD command to disable the interrupt mask that suppresses exceptions.

To generate one of the exceptions, “BusFault” exception and extract data, execute the unallocated memory space “0xf0000000” in STM32F1 series. Then, a BusFault occurs, and the exception processing address is saved on the PC.

The 'MemManage' exception that occurs when trying to execute an execution-prohibited memory area can be raised by executing the following command.

According to a test that used this vulnerability to attack the STM32F1 series, it was found that approximately 90% of data in flash memory could be extracted. Marc and Johannes have concluded that 'the read protection feature of the STM32F1 series has been breached,' and argue that the use of the feature should be avoided.

A movie that actually hacks the STM32F1 series has also been released.

The script used in the movie can be confirmed from the following.