'Honorary mayor of dog' is born in the United States, scandal is taken soon 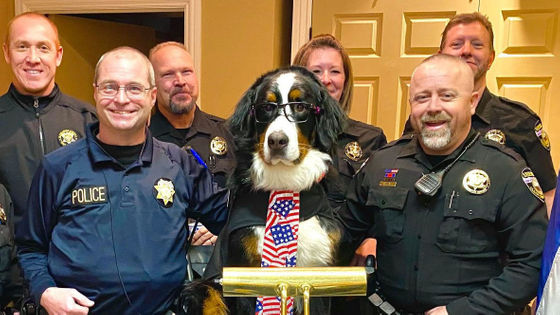 At the Prime Minister's Office in Britain and the government building of the Foreign Affairs and Federal Ministry (FCO), cats, not human beings, are assigned to the role of `` rat captain '' as official staff and work day and night, but Clear Creek, Colorado, USA In the county's Georgetown , the 'Honorary Mayor of the Dog' was born, and is reportedly receiving the respect of the residents.

At the inauguration ceremony for George Town held on February 18, 2020, the honorable mayor was named Parker of the four-year-old Bernese Mountain Dog . Georgetown police judge and concurrent mayor Linette Kelsey read the mayor's oath on behalf of Parker, and the Georgetown Community Center shook with applause and cheers from residents and government officials.

Parker has long been an official mascot at Loveland Ski Area near George Town, and its popularity has been extended to the official website and even Parker-inspired beers .

George Town's governing board unanimously appoints Parker, a Colorado support organization for the disabled and a charity activist at an animal shelter in Clear Creek County. It was approved . According to the official website, Parker's policy is to 'commit people to love, hugs and cookies.'

In addition, ' Hoodie of Parker mark ' is being produced to commemorate the inauguration of Parker's mayor. The price is $ 37.99 (about 4200 yen), and it is scheduled to be shipped sequentially from April 10, but it seems that it does not correspond to export to Japan. Parker has made a strong political debut, but the local media has also taken a tough look. The Denver Post, a local newspaper in Denver, Colorado, said on March 8 that `` In less than a month after Parker became mayor of Georgetown, Parker improperly occupied Loveland Ski Area. Was included in the video. '

The Denver Post's post on Twitter shows Parker stepping on fresh snow on a slope before the ski slopes open.

What did you do this week? Check out my adventure last night at @LovelandSkiArea ?? @ GoPro #officialsnowdog pic.twitter.com/i1z86od9yH

The Denver Post, who skipped the scandal, said, 'Is this going to hurt Parker's political career? Or will he be able to get over the issue and go to the Colorado governor's race. We hope for the latter, because Parker is a very good boy. '