roguelike games, ' which have a strong popularity as one of the game genres. Regarding roguelike games, Ars Technica states that 'disgusting ideas implement ideas such as extreme randomness, ASCII art , Permadeath (permanent death), and extreme complexity.'

A roguelike game is a game that explores randomly generated dungeons with little or no story. Also, there is a movement to specify the definition of roguelike games in a narrower range, and in the international roguelike game development conference held in 2008, it was defined that it should have a `` permanent death '' element it was done. This means that once a character dies, the game will be over forever. In addition, rogue-like games include 'generating dungeons at random or procedural levels', 'turn-based movement (moving at a relatively fast pace)', 'interaction between complex character / object worlds' and 'finite resources. Elements such as 'necessity of management' and 'player vs. monster' are required.

The oldest surviving computer RPG called 'pedit5' is a game based on Dungeons & Dragons that appeared in 1974, where players operate characters from a bird's-eye view and defeat monsters in 40-50 rooms. Explore the one level dungeon. In the case of Dungeons & Dragons, the dungeon is composed of multiple levels, and there are elements such as traps hidden on the floor and bosses waiting at the end of the dungeon, but these elements are omitted in pedit 5 . pedit5 is a game that includes a 'permanent death' element because if you defeat a monster, the game will be over.


In addition, ' Colossal Cave Adventure ', which appeared in 1977, is a game that includes a 'permanent death' element. Colossal Cave Adventure seems to have no elements of the roguelike game other than the `` permanent death '' element, but `` adventures in underground caves full of danger to every corner '' and `` It included many unique elements, such as the humorous process and the point of seeking creative solutions to problems. However, dungeons are completely fixed and are not randomly generated for each adventure, so they have the drawback that once you understand the composition, you can easily clear them.


Released in 1978, Beneath Apple Manor includes up to 10 randomly generated dungeons, game screens rendered with text and graphics, customizable difficulty, and battles with monsters. It contains many of the elements required for roguelike games. However, since Beneath Apple Manor was only playable on Apple II until it was ported to IBM PC and Atari game consoles in 1983, it did not become a big trend.

Beneath Apple Manor for the Apple II-YouTube


In 1980, Glenn Wifman , a student at the University of California at Santa Cruz, and Michael Toy collaborated to add elements such as `` randomly generated dungeons '' and `` monster items '' to the Colossal Cave Adventure. is created.

The two created a dungeon consisting of multiple hierarchies consisting of up to nine rooms using a programming library for UNIX systems called curses . The dungeon changes the arrangement of rooms, weapons and objects randomly each time you play. In the rogue, one uppercase alphabetic character represents monsters (26 types), and the character operated by the player is represented by '＠'. Players couldn't move faster or slower than monsters, and the turn progressed each time they read text, looked for traps, and used items. Actions such as swinging weapons, putting on armor, throwing weapons, and moving are assigned to the keyboard, and it seems that experienced people and gamers easily died from the difficulty.

Wifeman and Toy distribute the rogues to all UC campuses. After moving to the University of California at Berkeley in 1982, he added a new developer, Ken Arnold, and succeeded in gaining further popularity by improving the rogue. In 1984, the rogue was officially added to BSD 's Unix version 4.2, so it became possible to play rogue on computers of universities and research institutions around the world, and it became more popular.


As the name 'roguelike game', the genre starts with 'game like rogue'. From 1980 to 1982, an attempt to remake the rogue started with the RPG ' Hack ' developed by Jay Fenlason. Fenlason has created a simple clone game with his high school classmates so that he can no longer play the rogue he was playing, so he can play the rogue again.

By adding elements such as 'exact dungeon generation algorithm', 'about twice the number of monsters', and 'more complex character / item / monster interaction' to this clone game, the clone game is completely different game 'Hack'. Reborn. Hack, created as part of a high school student's play, was sent to USENIX in 1982 by creator Fenlason. At the top of the source file, it was stated that 'permission to use, modify, and redistribute the program' was specified.

Additional elements added by Brouwer include `` a two-part worm that attacks between the head and tail, '' `` a pet fighting with the player, '' `` more monsters, '' `` fortune cookies, '' `` dungeons visited in the past, There are various ways to return to the hierarchy, such as “shop” and “job”. 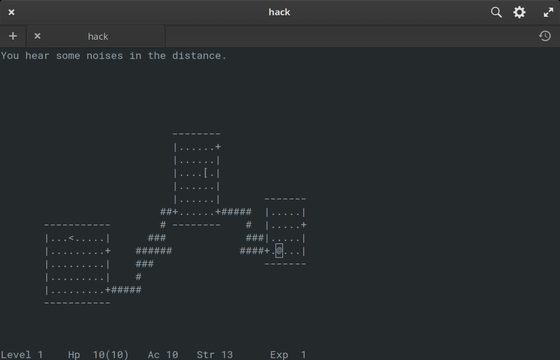 Like Fenlason's Hack, Moria is the beginning of a rogue-inspired roguelike game. The game is based on a rogue inspired by JR R Tolkien's novel 'The Ring Story, ' developed by Robert Alan Koeneke, who worked in a computer science lab at the University of Oklahoma.

Moria expands the dungeon hierarchy from 26 levels in the rogue to about 50 levels, which is about twice as large, and restricts each level of the dungeon from 9 × 9 rooms to create more free dungeons Upgrade by losing. By adding monsters that move around at different speeds for each level of the dungeon, improvements have been made so that tactical elements are required for battles with monsters rather than rogues.

In July 1987, a roguelike game called ' NetHack ' was born. Although new weapons and jobs, castles and special hierarchies have been added, Ars Technica basically has to be out of the scope of 'games that extend Hack'. However, the word ' YASD ' (another stupid death) has come from the NetHack community.


Various roguelike games will be born, such as ' Angband ', which started operation in 1991.

Rogue and its direct roguelike games were all stuck on expressing the game world with ASCII art. However, some developers have embraced new inspiration from other genres, such as `` Scarab of Ra '' released in 1988, combining Rogue with a first-person maze game, `` Maze War '' It is a work like a sword.


' Dungeon Hack ', born in 1993, is a roguelike game developed for commerce and developed from a first-person perspective. You can customize trap frequency, food availability, monster difficulty, and more, and optionally add a 'permanent death' element.


Rogue came to Japan around 1986, and became popular through the PC-8800 series of PCs sold by NEC.

Ars Technica mentions ' The Labyrinth of Death ' released for megadrives in 1990 as 'the first Japanese roguelike game I could find.' Ars Technica points out that the ' Dragon Crystal Tulani's Labyrinth ', released in the same 1990, is inappropriate as a rogue-like game because it lacks a 'permanent death' element.


Ars Technica described the Labyrinth of Death as 'a game that is very similar to a rogue, despite being a typical

JRPG- style graphic. Items, curses, food, etc. ' However, unlike most roguelike games, the Labyrinth of Death is not feasible for 'diagonal movement', and seems to have a defect that it can only move and attack in four vertical and horizontal directions. 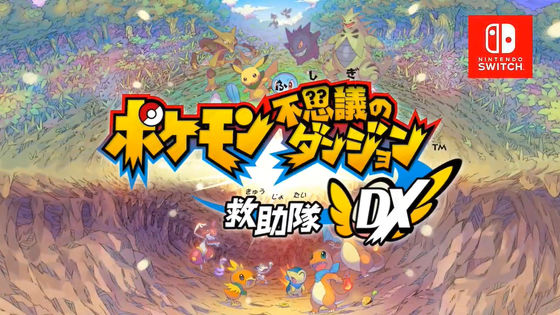 After that, elements of roguelike games are gradually being added to other game genres. In particular, since the 1990s, roguelike designs have increased in commercial games. Ars Technica wrote, ' Tojam & Earl ', released for Mega Drive in 1991, was 'the first game to cleverly disguise its roots as a roguelike game behind a colorful look and many clever designs' I am.

Diablo , born in 1996, has been described as a great help in bringing roguelike games to the mainstream. However, he pointed out that there is 'no depth or complexity' as in traditional roguelike games. 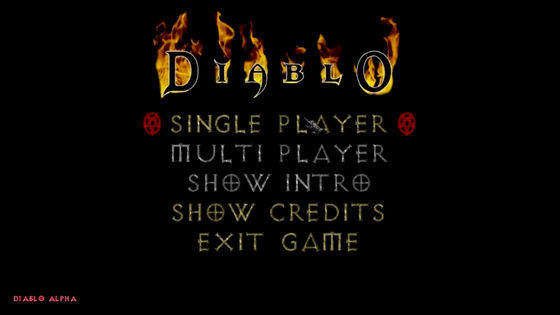 Furthermore, ' DRL ', which appeared in 2002, is a combination of popular FPS DOOM and roguelike games. DRL draws FPS, which is originally at the exact opposite position of roguelike games, into the same genre by enabling long range attacks like DOOM.


Desktop Dungeons , launched in 2013, and Road Not Taken , 2014, are titles that further demonstrate the versatility of roguelike games, combining roguelike elements with puzzle games. Elsewhere , 2015's Hand of Fate combines roguelike and card game action RPG elements. There are other games, such as Spelunky , that, while clearly not a roguelike game, inherit the elements of a roguelike game.

A roguelike game that has had a great influence on other genres while achieving various evolutions, but if you think that the beginning was `` gamers independently localized the game called rogue '', a roguelike game Ars Technica wrote that the way the elements spread through various genres and evolve is 'appropriate evolution'.