President Trump declared a national emergency on March 14, 2020, but it was evident from a document released by the New York Times that he had warned that a document of the same date `` pandemic will last more than 18 months '' became. The document mentions the shortage of medicines and the impact on the infrastructure in the pandemic. A document entitled 'USGovernment COVID-19 Response Plan' contains the following sentence: 'A pandemic lasts 18 months or longer and is likely to have multiple waves.' The figure of 18 months, which is described herein, of the United States National Institutes of Health to take 12-18 months to the practical use of the vaccine in clinical trials (NIH) has become a thing that matches the announcement . The document also mentions that shortages can affect critical infrastructure, including healthcare and emergency services. The shortage of supplies includes medical supplies and medical staff. In addition, it suggests that the U.S. and state governments and communication channels can be stressed and unreliable, making it difficult to update messages and adjust guidance for jurisdictions. .

The New York Times described the government's plan as 'mostly bureaucratic in nature, and some cases such as 'closing schools' and 'cancelling large events' have already been coordinated with government agencies and others. Was being taken and action was taking place. ' In a statement, a plan that could be taken by President Trump in the future could require that the President strengthen the production of certain materials, such as respirators and protective gear, as set out during the Korean War. It is said that this includes invoking the Defense Production Act of 1950, but in fact President Trump instituted the Defense Production Act on March 20. 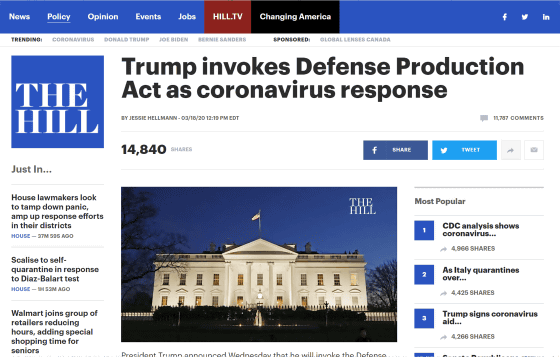 The United States also has a ' strategic state stockpile ' of storage to secure supplies needed in the event of a national public health emergency, from which supplies can be made or to states. It is also considering providing funding to meet demand.

According to the document, `` It is difficult to predict and characterize the epidemic and seriousness of COVID-19 '' and warned that there is a possibility that there will be a significant shortage of goods at any level of government, private companies and general consumers .