Plastics dumped into the ocean not only

pollute the oceans, but also affect the health of marine life , which inadvertently eats plastic, and human health . Research results that LEGO, which is famous as a plastic building block toy, takes about 100 to 1300 years to melt and disappear in the sea have been published.

Weathering and persistence of plastic in the marine environment: Lessons from LEGO-ScienceDirect
https://www.sciencedirect.com/science/article/pii/S0269749119364152

Study suggests LEGO bricks could survive in ocean for up to 1,300 years
https://phys.org/news/2020-03-lego-bricks-survive-ocean-years.html

A Lego Brick That Falls in The Ocean Could Still Be Found 1,000 Years From Now
https://www.sciencealert.com/those-little-lego-bricks-could-survive-in-the-ocean-for-more-than-1-000-years

Little is known, but at the time of writing, it is clear that at least millions of LEGO blocks are floating underwater. On February 13, 1997, the Tokio Express heading from Rotterdam to New York was hit by waves at a point 32 km off the coast of Cornwall in the United Kingdom and rolled over. One of 62 containers swallowed by the waves contained about 5 million LEGO blocks.

Lego which was in the container, the `` Aqua Zone '' series on submarines and aquatic organisms and the `` Pirates '' series on pirates occupied most, so attention was paid not only to the accident itself but also to the ironic meeting Was. After the accident, a number of Lego blocks drifted to the coast of Cornwall.

Spring tides, onshore winds and a sea of plastic left behind.
A Cornish beach this morning. # Cornwall #oceanplastic pic.twitter.com/BcGYRBIejL

Rob Arnold of Cornwall volunteer group `` Rame Peninsula Beach Care '' working on collecting plastic waste from the sea and Tracy of the volunteer group `` LEGO Lost at Sea Project '' collecting LEGO blocks from the sea Williams, together with Andrew Turner of the University of Plymouth in the United Kingdom, collects and analyzes scientifically the Lego blocks that flowed on the coast of Cornwall and said, `` How long will the underwater Lego blocks not melt? '' Was surveyed.

The research team compared the recovered LEGO blocks to their 'original condition.' The following is an actual comparison image, in which the LEGO block (left) that has flown to the sea and the new LEGO block (right) are arranged in pairs. It should be noted that 50 Lego blocks were actually used for analysis, but the following image picks up 14 of them. Each of the flowing LEGO blocks was worn, yellowed, crushed, and stained, but it was surprisingly nearly intact. The research team estimated that 'it takes 100 to 1300 years for the ocean to completely lose its shape' by calculating how much each LEGO block wears while drifting in the sea from the loss of mass. 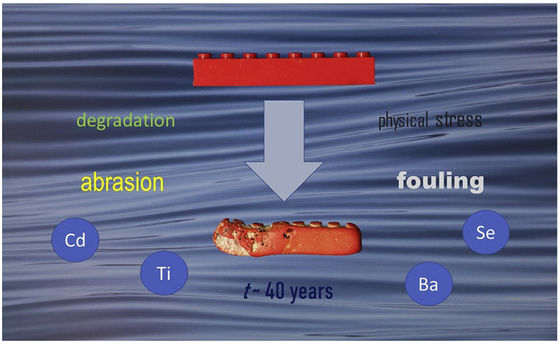 Lego blocks are made from a material called ABS resin . ABS is a relatively new material first commercialized by USRubber in the United States in 1954, so its long-term impact on the environment is unknown. However, according to the analysis of the research team, the raised LEGO block is partially damaged and fragmented, and it may be decomposed to the size defined as microplastic . By comparing the degree of decomposition of LEGO blocks and clear PET bottles, the research team estimates that the risks to LEGO blocks and PET bottles for marine life are similar.

Legos floating in the sea are not the only cause of the Tokio Express accident. It is estimated that more than 2 million LEGO blocks have settled in the sea by 'child flushing to the toilet.' 'It's important to dispose of unnecessary LEGO blocks properly so that they don't cause any potential environmental problems,' Turner commented.