From February 15, 2020 (Saturday), a game picture book ' Looking for a Dragon ' has been launched, where you can choose one of the protagonists from a warrior, a wizard, and a thief and set off on an adventure in search of a dragon . It is a picture

book in the form of a game book in which the people you meet and the items you can get change depending on the three protagonists and the three options. Although it is a picture book for children, it is said that adults can fully enjoy it, so I actually read what it is.

◆ Photo review
'Looking for a Dragon' is a Japanese translation of a picture book originally published in France. 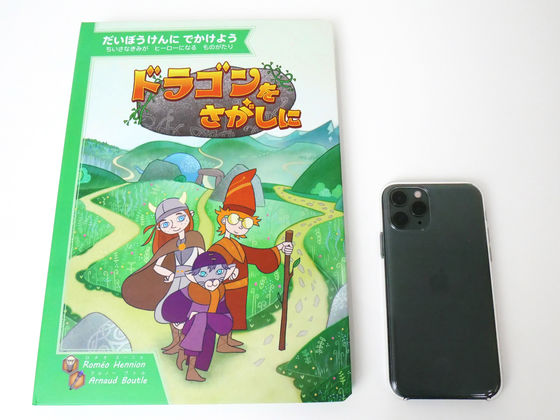 The spine has the thickest part, about 22mm thick. The iPhone 11 Pro side by side is 8.1mm thick.

On the back cover, the children who will be the protagonists and the story outline are written. The story is 'become a small adventurer and set out on an adventure to pick up your own dragon', and the target age is 4 years or older. When making it read to children, it is recommended that adults first read it and play together. When I opened the book, the pages were bound by a ring. Disc-shaped paper that can be swirled is attached to the four corners on the back of the cover. ◆ I went on an adventure to find a dragon
First, prepare for the adventure. Match the green, blue, and yellow discs where nothing is drawn. 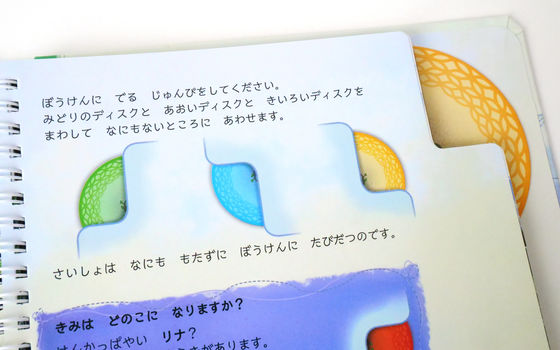 Make the discs on the upper left, upper right, and lower left of the picture book invisible as shown in the image below. Next, choose the hero. Choose one from 'Rina', a warrior who is quick but strong and courageous, 'Sasha', a quiet thief cat, and 'Chimon', a wise and clever wizard. This time I decided to have Lina go on an adventure. The red disk in the lower right corner represents the protagonist, so match it with the main character 'Lina'. When you're ready, go for an adventure. Lina's adventure begins in a small village. First, explore the village. One scene is divided into three parts, and for each scene, select one from the three selections and turn the page. In the scene where the state of the village is drawn, choose one from three options: 'Talk to the granny who grinds in the windmill', 'Search for a rough storeroom' or 'Stealing the map grandfather's map'. . I thought that 'a treasure might be sleeping in a rough storeroom' and decided to invade the storeroom. The pages from the next page are also divided into 3 pages, so turn over the page as many as the number written in the red frame. When I chose the option to 'find a storeroom,' I was instructed to turn only one page. If you turn the page, you will move to the next scene. The shed was equipped with a shelf that could be climbed up by a ladder. I want to go up, so I'll turn one more page. Then the floor fell out …… 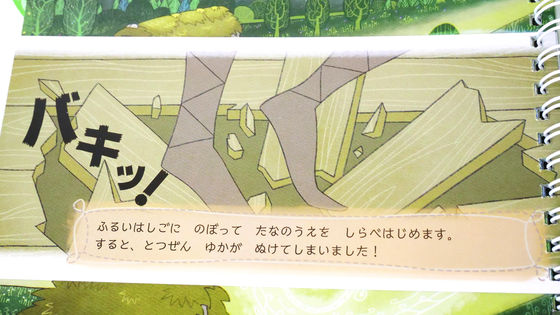 I fell down. Fortunately, he didn't get hurt, but he couldn't get anything like a treasure. Too bad. Follow the instructions to turn two pages. When you turn the page, the adventure goes to the next scene. The beginning of the scene is one large page, and the action selection page is divided into three. Rina leaves the village and reaches a large swamp. In order to cross the swamp, we chose a riverside route out of the three routes. Along the way, a lizard man with a big spear appeared. I'm standing in the middle of the bridge, so I can't seem to avoid it. Rina talks to the lizard man from the front without flirting. When he said, 'I'm going to pick up the dragon,' the lizard man was impressed and gave me a 'scale of scales.' I was able to talk to the lizard man because I was bullish Lina, but in the story there are people who can not get along with each other because of bullishness. Once you have the item, spin the disc. 'Uroko no Tate' is set by turning the yellow disc. 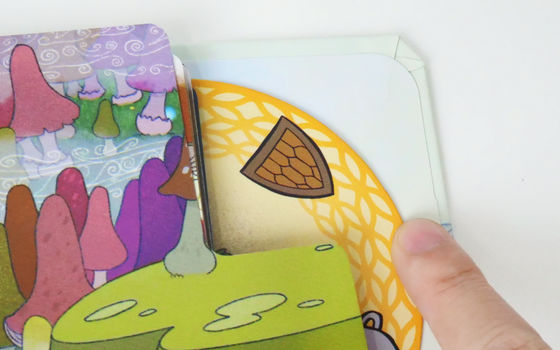 Items are also one of the factors that influence the development of the story. For example, with a scale of scale, you can protect yourself from the fire that you meet later. Also, in the middle of the adventure, besides the lizard man, the dwarves who are fond of blacksmithing ... A variety of encounters await, including witches living deep in the forest. However, adventures are not only encounters, they are also full of danger and sometimes injured. If you are injured, align the disc with the marking on the band. If the disc is already filled with items, you will lose the items and you will be injured. The more injured, the more dangerous the adventure. 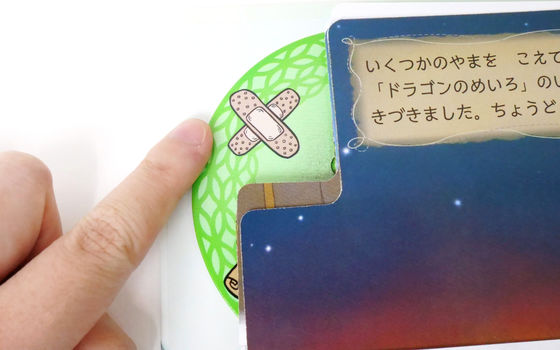 See if you can collect items, sneak in danger, and see if Lina can safely pick up the dragon.

The total number of pages is 28, and it took about 10 minutes for one adventure to read. In the second and subsequent adventures, 'What should I choose to avoid injury?' 'Which hero should I choose to get that item?' You can play based on the previous reflection, so adults can also play. It was a content that you could play with your head. The development changes depending on the hero, the three options, and the items you get, so it is a picture book that you can enjoy many times while trying various options. 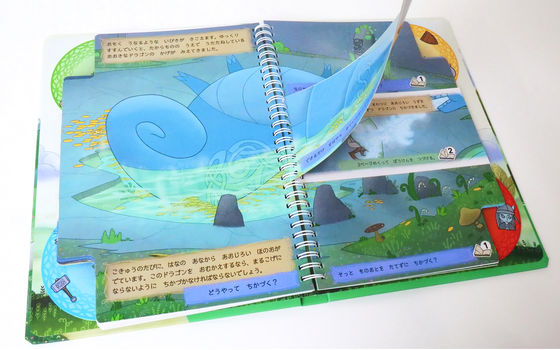 There is no scene in a story where someone is hurt or hurt anyone. Although there are occasions where you may be injured, the content is kind enough to be 'tired because you walk too much' or 'scratched and scratched', so even small children could read it with confidence.

Sugorokuya . At Amazon.co.jp, it was possible to purchase at 2640 yen including tax at the time of article creation. 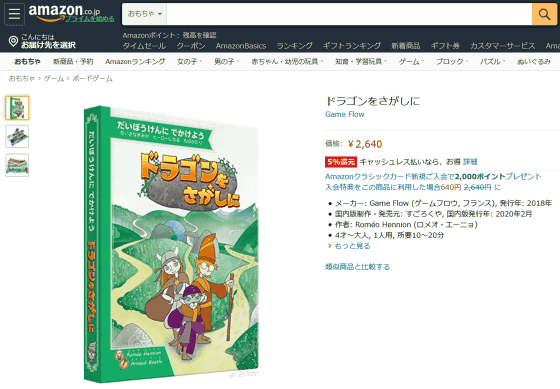