Parrot turned out to be `` judgable based on probability '', the first animal other than large apes According to past research, parrots that can mimic human language depending on their type have been found to have high intelligence, such as '

learn how to make and use tools from peers .' Experiments have shown that such parrots have the ability to 'understand the concept of probability.'

Parrots Are Only The Second Kind of Animal We've Found That Can Grasp Probabilities
https://www.sciencealert.com/parrots-are-only-the-second-animal-we-ve-found-that-can-grasp-probabilities

This time, it was revealed that the 'probability can be understood' is a beetle parrot , an endemic species of New Zealand's South Island , which is known locally as the Maori name 'Kia'. The beetle has very high learning ability and curiosity to adapt to a low food environment, and tourists visiting New Zealand say he is called the ' clever clown in the mountains .' 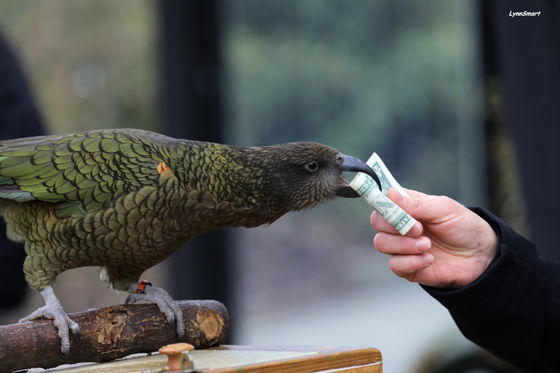 Researchers Alex Taylor and Amalia Bastos at the University of Auckland in New Zealand have found that the beetle has such amazing capabilities. Researching intellect from two aspects, zoology and psychology, they experiment with understanding the probability using six beetles named Rofeld Bruce Loki Neo Plankton Taz. The we.

In the experiment, two bottles filled with 'orange lottery' and 'black lottery' were used. The percentage of lots in each bottle is uneven, and the bottles themselves are transparent, so it was possible to see from outside what lots were in which bottle. In the first experiment, the experimenter showed the beetle a 'fist that took one of the lots from each bottle' and selected it, giving him a snack only if there was a black lot in his hand. As a result of repeating this 20 times, Miyayama parrots were able to reach snacks with a higher probability than chance. After that, I covered part of the bottle ...

Even if it was difficult to predict the probability by separating the bottles with partitions, the parrot was able to properly select 'the one with the highest probability of correct answer'. Bastos said the results of Miyama parrot at about this result 'experiment, their intelligence is flexible, such as to not depend on the specific situation area generality shows that the thing with. In the past age 12 Similar results have been obtained with infants under the age of months and great apes , but given the fact that parrots and apes diverged from a common ancestor 321 million years ago, a high level of knowledge integration in the beetle parrots What was observed is very surprising. '

According to the research, not only the intelligence of Miyama parrot was high, but also the result that contributed to the development and development of AI was obtained. In his dissertation, Taylor and his colleagues wrote, 'Our research has important implications for research that develops thinking processes for artificial domain generality because it leads to an understanding of how intelligence evolves. I do. '