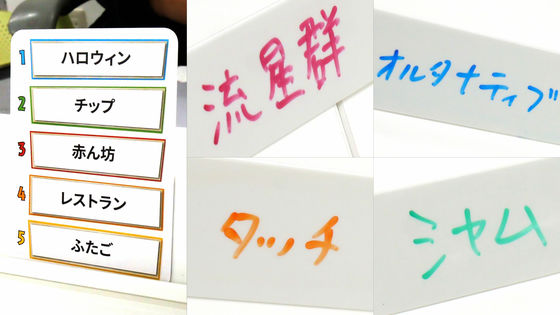 The board game ' Just One Complete Japanese Version ' that collects hints from everyone and derives the correct words has appeared from Thursday, February 20, 2020. At first glance, it seems like a simple game, but I tried playing Just One, which is exquisitely difficult due to the unique subject and the rule that tips should not be worn with the opponent. 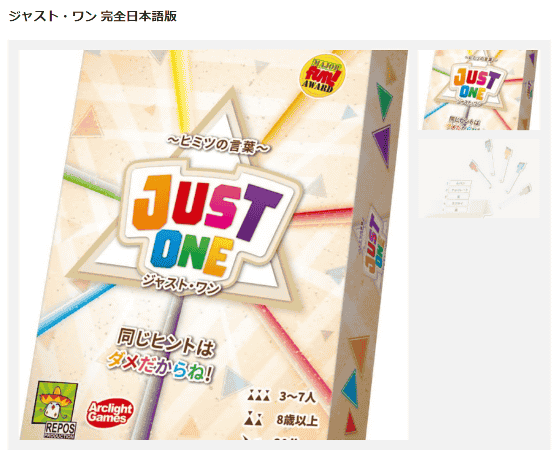 The number of players is 3 to 7 and the target age is 8 years or older. Play time is assumed to be 20 minutes. 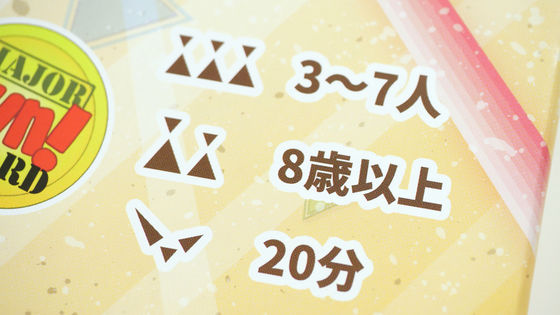 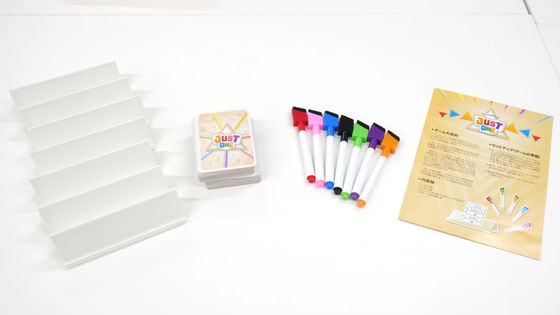 Easel is about this size compared to transportation IC cards. 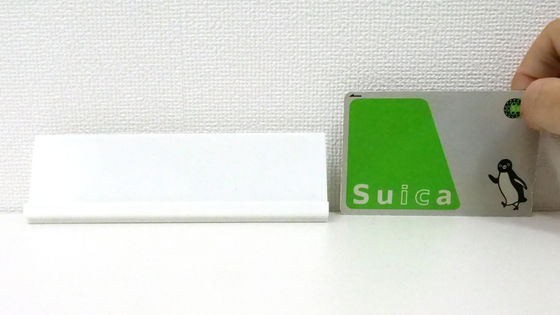 One side has a 'back' to lean against the card. 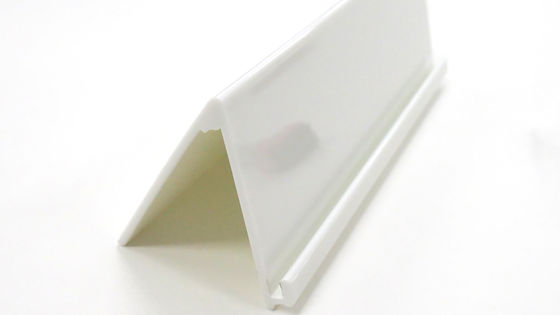 Water-based ink felt pens have 7 colors in all. 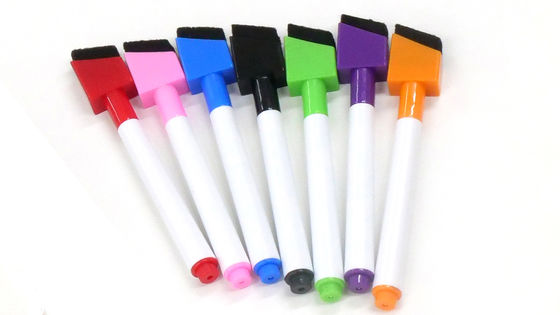 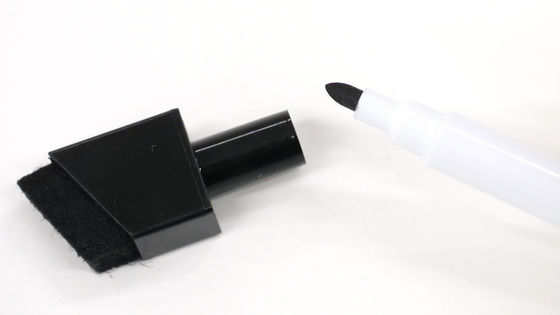 You can erase the letters written on the easel. 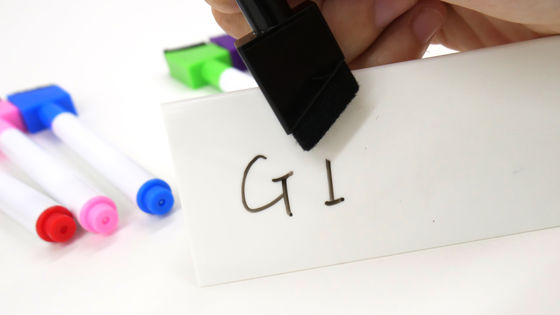 There are five words on the card, which are 'secret words.' ◆ I tried playing with 7 people
Just One can be played by 3 to 7 players, and the rules are slightly different for 3 players and 4 players or more. This time, I played with a maximum of 7 people. Give each player one easel and one felt-tip pen. 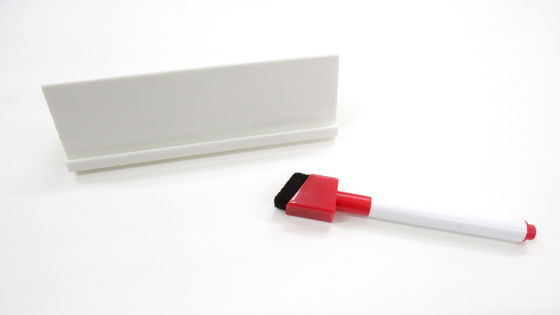 Make 13 decks by drawing 13 cards from the shuffled cards. Other cards are excluded from the game. 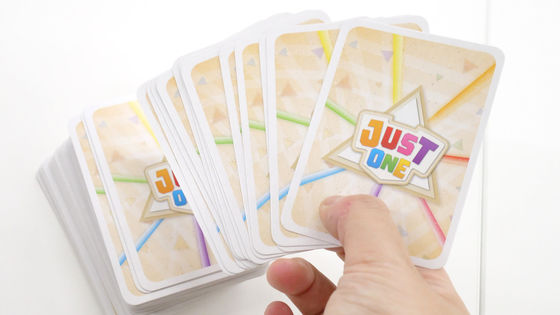 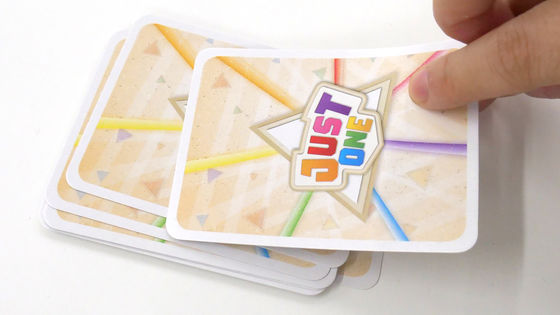 Respondents should not look at the contents of the card. Respondents lean against the easel so that other players can see the card, and declare their favorite number from 1 to 5. For example, if you declare '4', 'marriage' is the secret word. 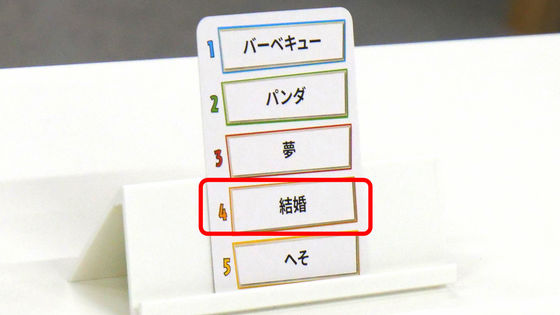 Other players write one word in the easel on the easel so that respondents can reason about the secret word “marriage”. It is forbidden for players to talk to each other when they think of hints. The tips that six people other than the respondents actually thought were 'graveyard,' 'cake,' 'bouquetos,' 'shiromuku,' 'bride,' and 'hakaba.' It's subtle whether 'bouquettos' is one word, but this time it's OK.

It's awful that 2 out of 6 people think 'marriage is a grave of life', but if the tip you wrote is the same as someone else, the tip is invalid and you can't show it to the respondents. 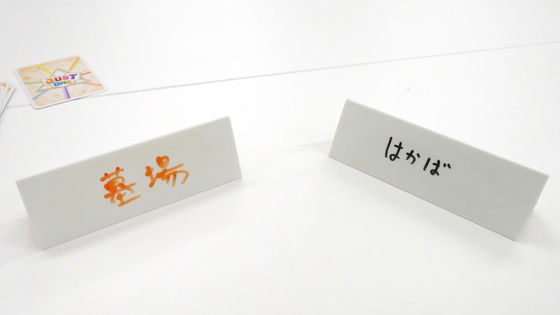 When the answer is over, the respondent moves to the next player. Draw cards until there are no more decks, choose the theme words, and other players will come up with hints. Just One is a game in which all players work together to increase the number of points, so the goal of the game is to answer correctly in succession and aim for all 13 cards to succeed. 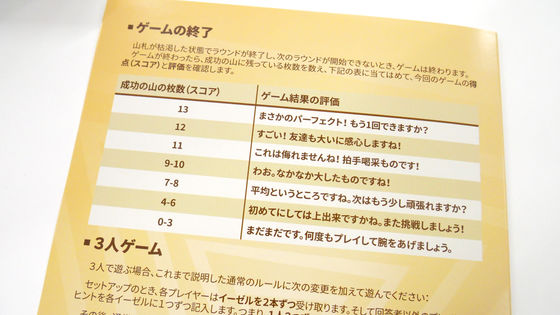 The point is that the hints should not conflict with other people, so it is necessary to twist out words that are easy to understand and that others do not think. However, even a hint you can understand is meaningless if it is not communicated to the respondents. For example, the hint for a certain topic was 'Substitution', 'Shingen Takeda', 'Tatsuya Nakadai', and 'Fake'. Two out of six are covered and excluded 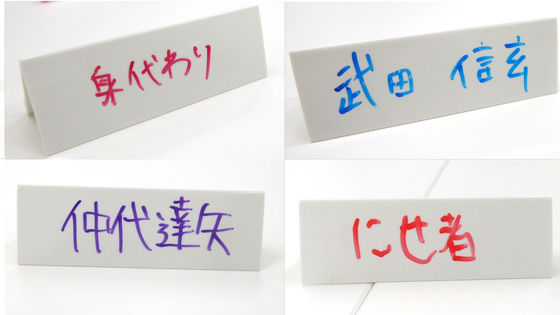 Respondents were confused because they did not understand the relevance of the four tips. Above all, he didn't understand 'Tatsuya Nakadai' well.

The correct answer was 'Kagemusha'. 'Tatsuya Nakadai' was referring to '

Kagemusha ' in the movie. Akira Kurosawa, however, didn't understand the relevance of the work to the respondents who were not bright enough to convey it. 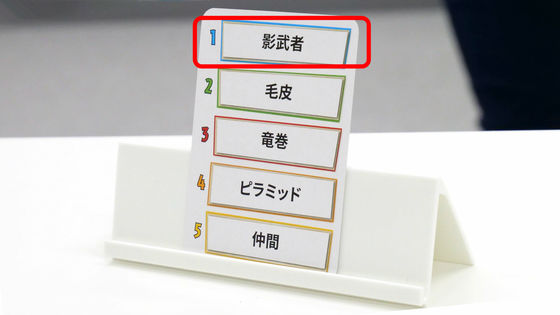 It was a hint that it looked exactly like it was excluded by wearing it. It may have been conveyed to the respondents if 'similar' was left as a hint, but when it comes to Kagemusha, easy hints like 'similar' are easy to wear with other people, so if you do not wear it The more difficult the hint is. 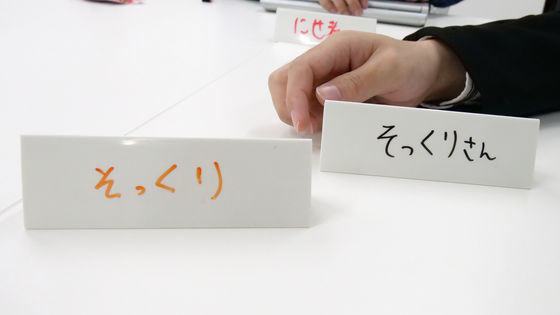 Even if it becomes difficult, there is no problem if the respondents can understand the common points. 'Touch', 'Alternative', 'Meteor shower', and 'Siamese' written as a hint of a certain subject ... 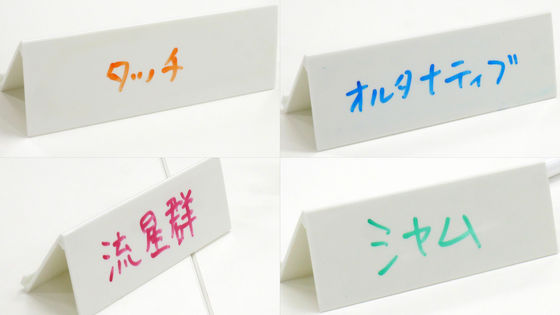 Respondents immediately saw 'Alternative' and immediately understood 'Futakoi?', So they were able to answer 'Futago', which was the correct answer. Touch is the manga '

Touch ', alternative is the animation ' Futakoi Alternative ', meteor shower is the 'Futago meteor shower', and Siam is ' Siamese twins ' which is another name for combined twins. 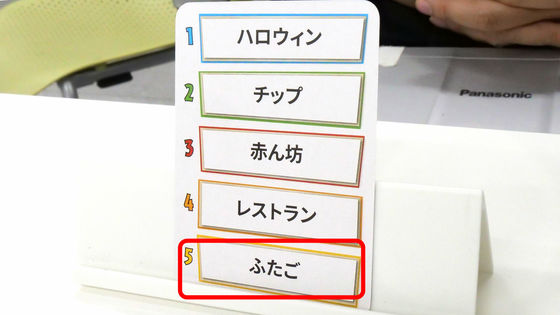 ◆ I tried playing with 3 people
Only for 3 players, there will be 2 easels per player. Other rules are the same as for 4 or more people. 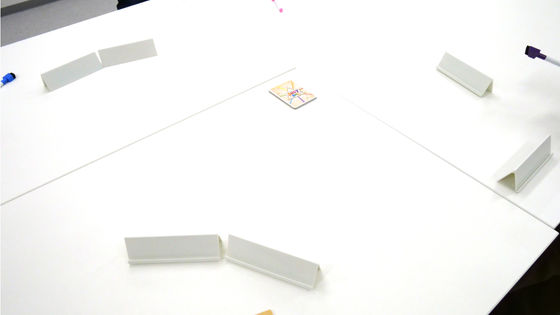 With 3 players, there will be a maximum of 4 hints, but if you wear it, you will only have 2 hints. The hint for a certain topic is as follows, but the hint is only for 'design' and 'sewer' with 'Love Live!' 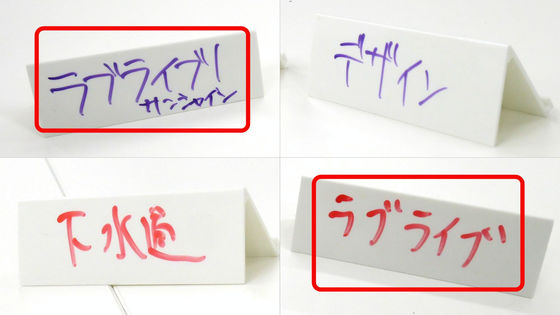 'Sewer' and 'design' did not reach the respondents. The less hints you have, the more difficult it becomes. 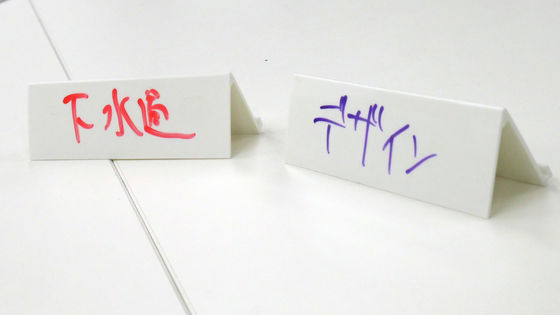 The correct answer was 'manhole'. 'Love Live!' Refers to the

original color manhole installed in Numazu City , Shizuoka Prefecture . This is also a love live! I don't know unless it's very bright, so it may be exciting when playing between anime lovers. 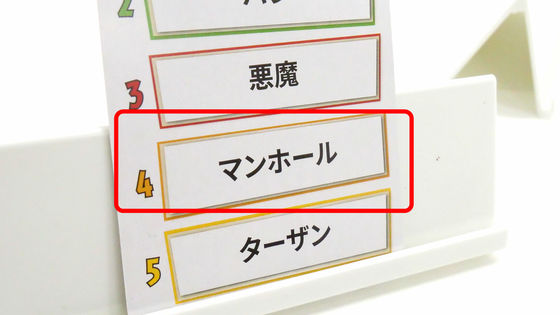 Also, since one person gives two hints, the content of the hint may be quite biased. 'Kid', 'Fighting', 'Toho Daimos' and 'Oyama' Is ... 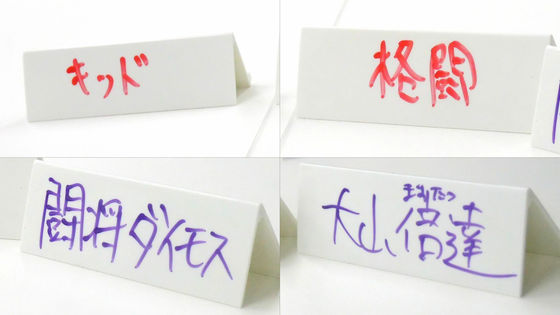 best kid ' in the movie, fighting was 'martial arts', ' Toho Daimos ' was an animation, ' Oyama Baitatsu ' was a karateka and founder of Kokushin Kaikan, so 'Karate' was the correct answer. . Although the respondents were familiar with anime and movies, the common points were conveyed, but some editorial staff who were not players commented, 'I don't know Baita Oyama,' which was sometimes a hint for choosing people. 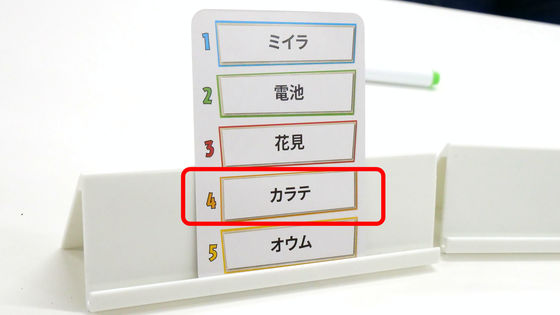 It's also exciting that respondents who can't see the card randomly choose a theme word. I wanted the player to choose 'Terminator' because there were many movie lovers this time, but unfortunately the respondent chose a different number and there was a situation where the player sighed. 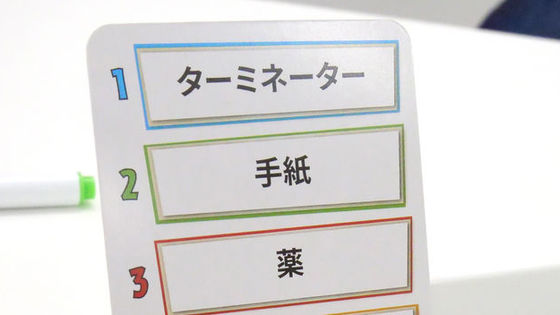 As you give hints and continue to answer, you gradually find out who tends to give you what. Not only the person giving the hint, but also the respondent grasps the tendency of the other person, grasps the intention and infers the correct answer to aim for the correct answer for all questions. It was a game that you could play in a different way by giving twisted hints.

'Just One Complete Japanese version' can be purchased for 2800 yen excluding tax, and at Amazon.co.jp it was possible to purchase it for 3057 yen including tax at the time of article creation. 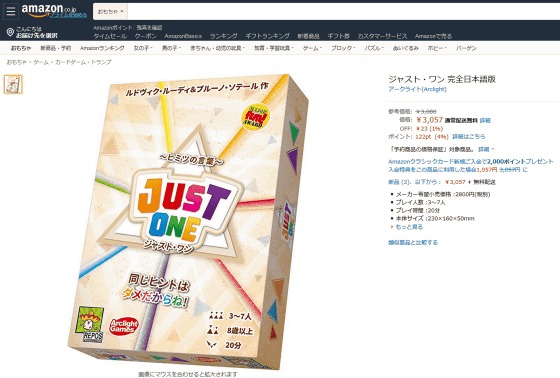