The animation “Heterogeneous Reviewers” being broadcast on Sun TV has been canceled due to the organization of Sun Television Co., Ltd.

The official website of Sun TV has also published a document that will end broadcasting on the 5th episode of the February 12 (Wed) broadcast. 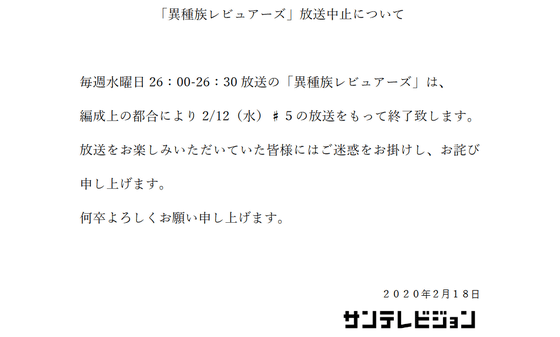 In TOKYO MX, the vacant program slot was replaced by a voyage, but in the case of Sun TV, closing was advanced 30 minutes because it was the last broadcast slot of the day.

Due to the suspension of broadcasting on Sun TV, only KBS Kyoto will broadcast on terrestrial broadcasting stations. In addition, KBS Kyoto broadcasts every Sunday from 26:10, and on February 16 (Sunday) already the sixth episode `` Golem is very enjoyable if you can make an ideal girl, but the sense is questioned, and the model is ballet Will Owisp's shop has a fantastic parade of light, a dream garden. '


The seventh episode is 'Old men's eyes are empty at the spawning show! I will show you the secret of Maidley! And finally announced! Succubus popular vote!' Is the oviposition show okay?