nematocysts There are those with, we use the poison to prey on fish and plankton to be the bait. Humans can also swell and bleed their skin when bitten by a jellyfish sting, and in the worst case they can be fatal. In such a poisonous jellyfish, a team led by researchers at the Smithsonian National Museum of Natural History, Kansas University, U.S. Navy Research Institute that there is a species that `` fires cells with the venom '' as well as stabs tentacles. discovered.

Cassiosomes are stinging-cell structures in the mucus of the upside-down jellyfish Cassiopea xamachana | Communications Biology
https://www.nature.com/articles/s42003-020-0777-8

Cassiopea xamachana, which the research team paid attention to this time, is a kind of jellyfish, and it is generally regarded as 'non-stabbing jellyfish'. However, there was a case where a diver who swam around Cassiopea xamachana drifted reported 'skin tingling'. 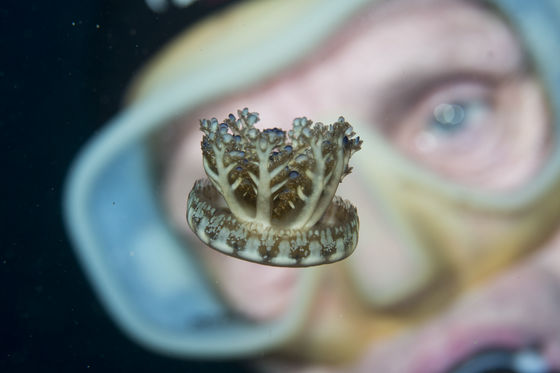 When the research team observed the mucus released by Cassiopea xamachana, they found a small stab cell capsule. The research team has named this capsule ' Casiosome ' from its scientific name.

Casiosomes are hollow spheres, which are filled with translucent and gel-like substances that make up the body of jellyfish called “mesoglea”, and with symbiotic algae. The cells that make up the sphere are sting cells, some of which have cilia , and the casiosomes can move in water. In addition, three types of toxins were detected from sting cells.

The following movie shows where Artemia was put into Cassiopea xamachana's aquarium. When Artemia is put in, gently shake the aquarium to stimulate Cassiopea xamachana, and in just one minute, you can see that most of Artemia has been immobilized by the poison of the Casiosome.

Brine Shrimp Succumbing to Balls of Stinging Cells From Jellyfish-YouTube


'I don't know much about jellyfish poisons,' said the co-author of the paper, 'This study reveals one of the most interesting and novel ways to use jellyfish poison.' It's now. '

`` The existence of jellyfish has been known for more than 200 years, but the presence of the casiosome has not been known before, '' said Allen Collins, the creator of the research project and a zoologist at the U.S. Agency for Oceans and Atmosphere. The findings are particularly exciting, 'commented,' Cassiopea xamachana is not a particularly toxic creature, but it does affect human health. '