Tens of millions of Cisco devices found to be vulnerable to network intrusion, emergency patches distributed Armis reports that devices such as routers and switches from Cisco , the world's largest network equipment developer, have been found to be vulnerable to intrusion into the network by hackers. This vulnerability is expected to affect tens of millions of Cisco devices, and Cisco is distributing emergency patches. The vulnerability was discovered in a protocol called Cisco's proprietary 'CDP', which is used to search for information on Cisco devices in the network. CDP packets have an area that indicates the required power of

PoE , but the range of values limited by this area was inappropriate, so inputting an excessive value could cause a stack overflow. The main vulnerability. CDP is used not only on Cisco routers and switches, but also on IP phones and cameras.

Highly functional routers and switches have a function called ' VLAN ', which virtually separates networks, and basically network devices that exist in different VLANs are treated as being connected to different networks. . Taking advantage of these characteristics of VLANs, VLANs are sometimes used to improve security, such as setting up VLANs for each department in a company. However, the vulnerabilities discovered this time will allow network attacks such as destruction of the VLAN, leading to lower security levels such as leakage of confidential information. 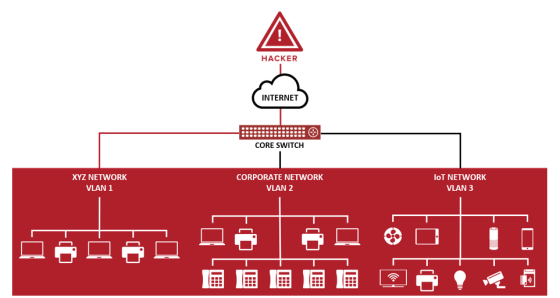 A demo video has been published that actually attacks the CDP vulnerability using the Cisco switch 'Nexus Switch 3048'. Hackers analyzed the CDP packets sent from the switch and obtained information such as the ID of the VLAN to which they are currently connected. Based on the above information, the switch sends data to the switch that indicates the required power of PoE in the CDP packet, and causes a stack overflow . When the attack succeeded and the switch command was executed, the user name and password could be extracted and the IP address could be assigned to the VLAN. Connected to the company VLAN, you can see the information of the notebook PC. In addition, demo videos for hijacking IP phones using CDP have been released. This demo exploits a vulnerability in which IP phones treat broadcasted CDP packets as legitimate packets.

Cisco has been notified of vulnerabilities and has distributed patches to address them, all of which have a severity of 'High', the second highest of four levels.

CDP is a data link layer in the OSI reference model , and is a protocol that operates only within the LAN. Since it does not flow into the WAN, it cannot be attacked from the Internet. However, Armis states that in order to avoid vulnerabilities, it is necessary to apply patches promptly or, if patching is difficult, monitor the behavior of Cisco equipment and identify suspicious behavior. You.