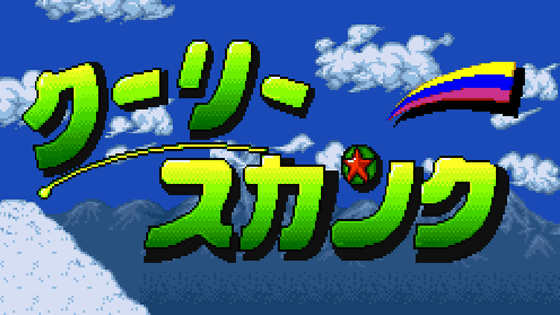 The action game `` Cooly Skunk '', which was once released on PlayStation in 1996, was originally developed for the Super Nintendo. However, due to various circumstances, the Super Famicom version was not released, and the data was deleted from the development company, so it became a phantom software. It turns out that the trial version of such Super Famicom version Cooly Skunk was distributed on

Satellaview . It is reported that the Super Nintendo version was revived by software analysis.

You can see what kind of game the Super Nintendo version Cooly Skunk that has made a miraculous revival is by watching the following movie.

BSX cart currently at the Super Potato in Akiba. Bonkers price tag on it, though. pic.twitter.com/8igD87abKG

BS-X is a ROM cartridge for the Super Famicom peripheral 'Satellaview'. Satellaview is a service that allows you to distribute content such as games, additional data, radio programs, etc. with data communication using broadcasting satellites, and it was possible to save and play in BS-X cartridges with built-in flash memory.

Cooly Skunk is a game released by a game maker called VISIT for PlayStation . However, the discovery of BS-X cartridges revealed that Cooly Skunk was originally developed for the Super Nintendo, and although the product version was not released, the trial version was distributed on Satellaview. Hidden Palace , a community of retro game enthusiasts, pooled their money to purchase a rare cartridge containing this elusive Satellaview version.

After that, the recorded demo version of Cooly Skunk was analyzed, and it was discovered that by removing the demo limit, the entire game could be played until the end credits. Gaming Alexandria of overseas game news media said, 'Judging from the date '1996' displayed on the title screen of the game and the degree of completion of the game, it was probably delivered just before the development of the Super Famicom version was canceled at VISIT. I'm guessing.

Here's a modification to the recently released SNES game Cooly Skunk that stops the game from resetting after beating the third world!

Check it out here:

As for why the Super Famicom version of Cooly Skunk, which was released on PlayStation, was being developed, Kenji Naruse, CEO of the game development company Ukiyo -tei and director of Cooly Skunk, answered an interview on an overseas site. increase.

'Cooly Skunk' is a game born from a project to create a mascot character for BPS , which developed the Famicom version of 'Tetris' and ' Yoshi's Cookie '. At that time, a game magazine published information that it was scheduled to be released under the name 'Metamol Kid Goomin'.

Ukiyo-tei was commissioned by BPS to develop this game. Mr. Naruse testified that there was a request from BPS for 'an action game for children', and it was released by EPIC / SONY It is said that it was developing with the concept of making it for young people. However, the project itself ended in the middle due to the direction change of BPS.

When the game itself was almost completed, Mr. Naruse said that VISIT asked if he could make another game using the engine part of the game. At that time, Sony had already released the PlayStation in Japan, but SNES (Overseas Super Nintendo Entertainment System) was still strong in the American market, so development was restarted as software for overseas markets.

At this time, the feature of attacking with a skunk character and a fart is added, and Cooly Skunk (English title: Panky Skunk) is nearing completion. It is also confirmed that promotional costumes were already made at the exhibition trade fair ' Nintendo Space World ' held at that time. 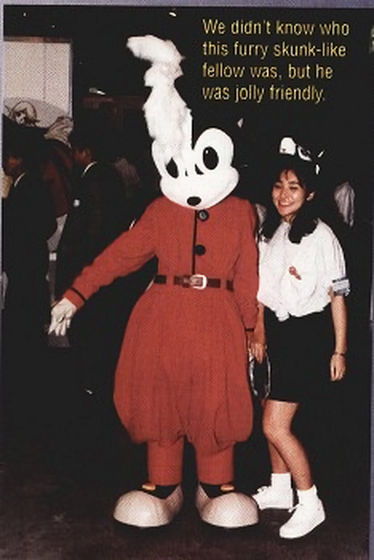 According to Mr. Naruse, Ukiyo-tei has no data from before 2000. In other words, the data of the Super Nintendo version, which would have never been released to the world, was revived from the demo version of the Satellaview cartridge that was discovered by chance.

The results of Cooly Skunk analysis are published on GitHub .