Spider web `` Silkhenge '' with a strange annular structure like Stonehenge 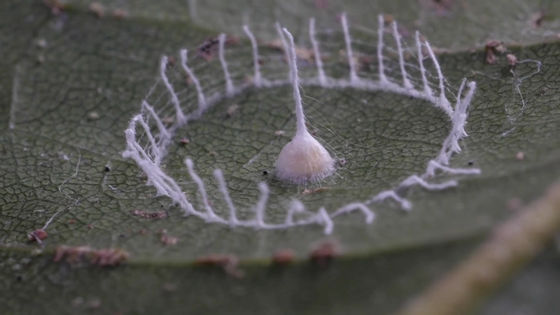 Stonehenge , located in Salisbury in the south of England, is a ring of stone that seems to have been created between 2500 BC and 2000 BC. Stonehenge has been captivating many archaeologists because it is a strange archeological site that does not know who built it for what purpose, but like this, there is no idea who made it for what purpose An unknown structure was found in the Amazon rainforest in 2013. This mysterious object was named ' Silkhenge ' because it was circular and its origin was a mystery, and it was later found to have been created by a spider.

Silkhenge is a small, mysterious, fingertip-sized structure discovered in the Peruvian Amazon in 2013 by researchers at the Tambopata Research Center. A fibrous object like a spider web forms a fence-like object, in the middle of which stands a tower-like object. Many scientists have followed the mystery with its strange and distinctive appearance.

At first, it was not clear whether it was an animal or a fungus that created Silkhenge, but Mr. Torres working at the Tambopata Research Center in December 2013 and Larry, an entomologist at the University of Florida. Reeves, Gina Hill, and photographer Jeff Creamer have successfully witnessed a spider hatching in Silkhenge.

Later, in 2016, Torres released a video on her YouTube channel that captured the moment when a small spider hatched from Silkhenge for the first time in the world.


This is Silkhenge. In the center there is a vertically long egg sac like a tower, around which a spider web surrounds like a fence. 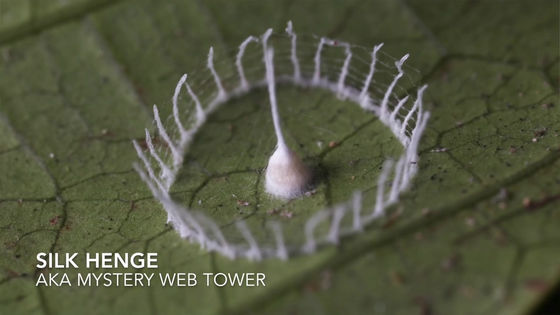 The moment I shot Silkhenge from directly above. Amber limbs peek out of the central egg sac ... A spider that has just hatched from inside appears. 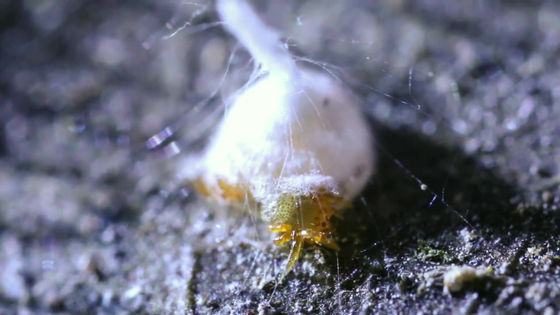 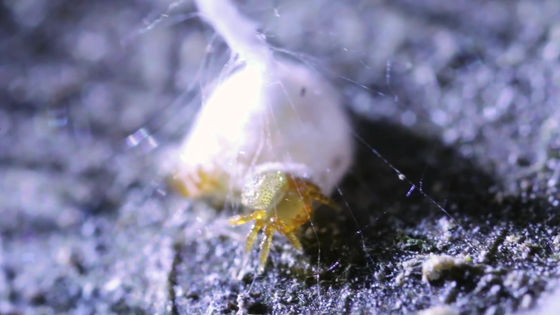 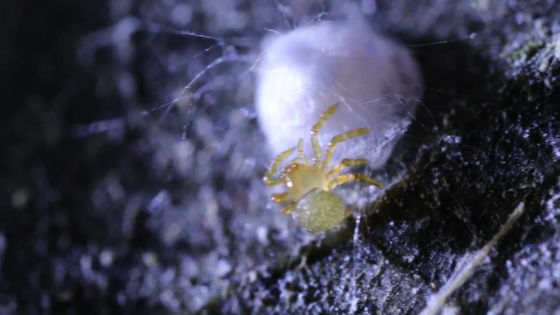 Spider threads on the fence around Silkhenge are thought to protect the egg sac, but the type of spider that produces it has not been identified at the time of writing. Torres told Live Science, a science media, that 'finding Silkhenge is very troublesome.' According to Torres, silkhenge can be found behind the leaves of broad-leaved trees, can appear on the bark, can be found in areas that are regularly flooded, or can be found in places free of flooding It seems that there are things, and it reveals that there is no very good place to hold.

Also, Torres discovered Silkhenge during a sightseeing tour in the Amazon rainforest in March 2019, and has published the situation on his YouTube channel. According to Torres, 'It is the first movie to capture Silkhenge at 4K resolution'.

First Ever 4k footage of Silkhenge! The Return to Silkhenge Island-YouTube


Torres looks for Silkhenge in the Amazon rainforest. It was discovered in March 2019 only after the area was completely dark. The participant of the sightseeing tour was shooting the moment of discovering Silkhenge with a smartphone, and the image quality of the image drops only at this moment. 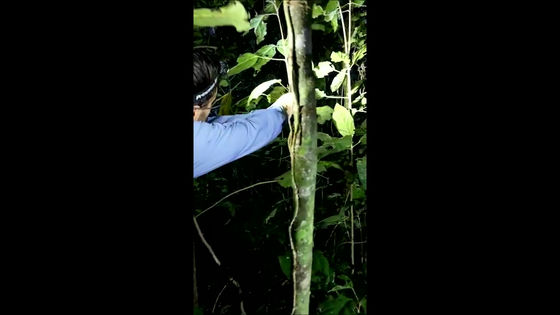 There is Silkhenge on the back of the leaf that Torres has broken off. 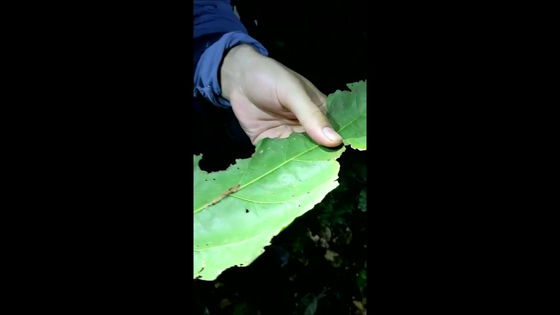 The following image was taken with a high-performance camera in a bright place with lighting. 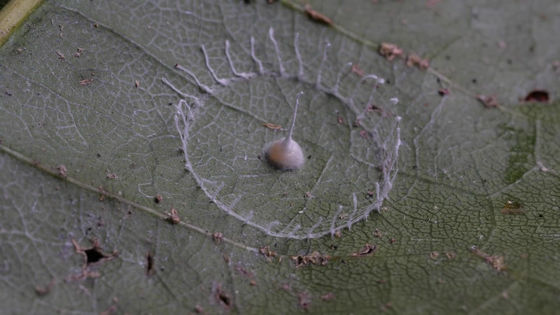 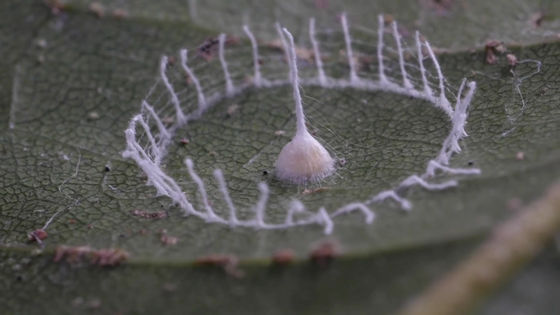 The size is smaller than the fingertip. 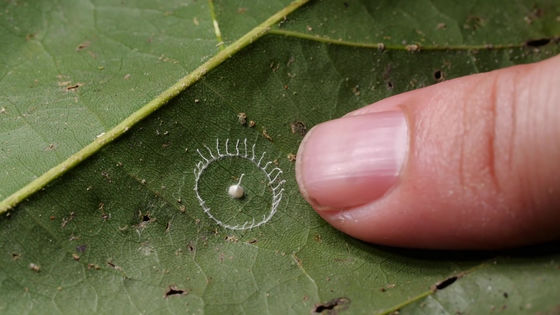 It seems that there is no way to tell whether the fine spider threads that extend from the fence and the central tower are structurally important, or that they are unnecessary things that were created during the process of creating silk change. 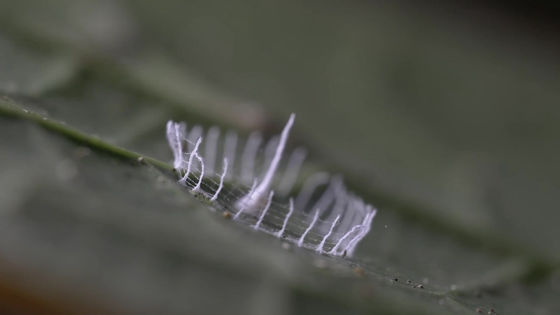 Initially, it was thought that the egg sac contained only one egg, but it seems that it actually contains a few eggs. 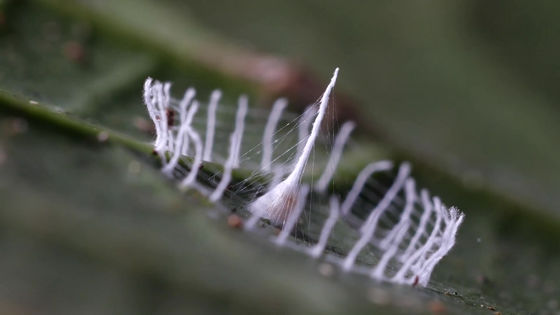 And the fence is thought to protect the eggs from hornets trying to eat the egg sac. 'Silkhenge's fence structure may be to prevent hornets from landing,' Torres said. 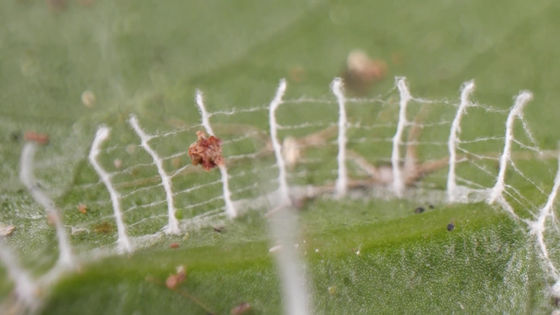 At the end of the movie, 'Female spiders create silkhenge in groups. We found three silkhenges in one area. This discovery will make future Stonehenge exploration easier.' This suggests that Silkhenge can be found more than once in a nearby area. 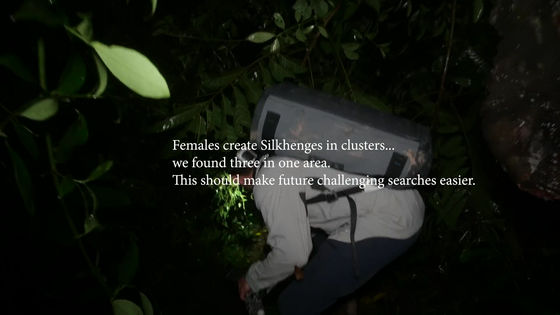