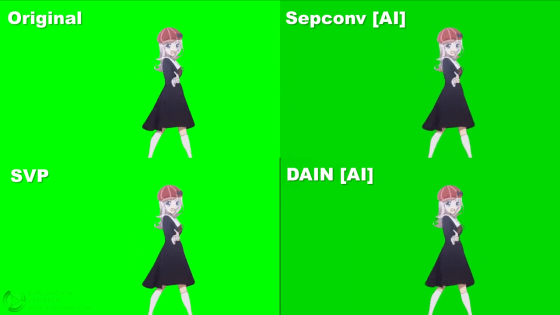 The software ' Dain-App ' that can interpolate frames and express them smoothly even for videos with low frame rates has been released as an alpha version. AMD's Fluid Motion and SVP are known as frame interpolation technologies, but Dain-App recognizes the depth of space in the video called `` DAIN '' and gives priority to objects closer to the viewer than objects far away. Frame interpolation is realized using AI that samples and interpolates intermediate frames.

The same video is divided in half, the original video is on the left side, and the video processed by Dain-App is on the right side.


When you stop the video and look at each frame, you can clearly see that the intermediate frames are interpolated by Dain-App. At first, a ball is floating in the air at the same place, but when you advance the video for one frame, ... This is a video in which animation by dot picture is frame-interpolated by Dain-App. The original video on the left is crisp like a

GIF animation , but the video on the right after frame interpolation is moving smoothly.


Comparative videos using animation drawn with cels and CG are also available. At around 34 seconds and around 1 minute and 50 seconds in the video, you can see at a glance that the wings and hair of the character are flowing smoothly.


However, around 3 minutes and 33 seconds , the depiction of the finger collapsed, indicating that Dain-App is an alpha version. Even hand-painted animations like flip-flops can be interpolated beautifully.


It looks like this when comparing the original video with the video that frame-interpolated one scene of the movie with Dain-App, FFmpeg and VapourSynth . Looking at the movement of many creatures that appear around 1 minute 47 seconds, it is easy to see that the video processed with Dain-App is moving most slimy.


Compared with SVP and DAIN, as well as sepconv , which is a frame interpolation technology based on AI, the video processed by Dain-App moves more smoothly than the one processed by SVP, but the movement around 13 seconds and 23 seconds There are many places where the movement of the character is broken, such as the movement of.


NVIDIA's CUDA- compatible GPU is required to operate Dain-App. It is an alpha version at the time of article creation, and the size of the software itself is quite large, about 1 GB, but it is said that it aims to improve in future updates.