`` 13 emotions '' evoked by music are classified 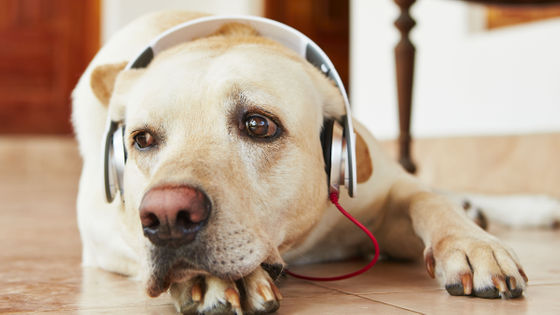 Some songs make you feel happy just by listening to them, while others, like the theme song of Joe's , appeal to your instinct that 'the danger is imminent.' A collaborative team from the University of California, Berkeley, USA and the University of Amsterdam , The Netherlands, researched and mapped out the emotions that each song evokes.

The research team asked about 2,000 U.S. and Chinese subjects collected at Amazon Mechanical Turk , an online gig economy platform, to listen to 40 pre-selected songs, and elicited `` emotions '' and `` positive / 28 types of items, such as negative mood and excitement, were evaluated.

The research team used statistical analysis to classify each evaluation result into 13 categories and matched each category to 13 emotions that did not change with culture, such as `` depressive (depressed) '' `` dreamy comfort '' . In addition, the research team examined these 13 emotion categories in a follow-up test with about 1,000 subjects. The follow-up tests indicated that each emotion category was effective.

From the link below, you can see a map that visualizes the emotions evoked by music. 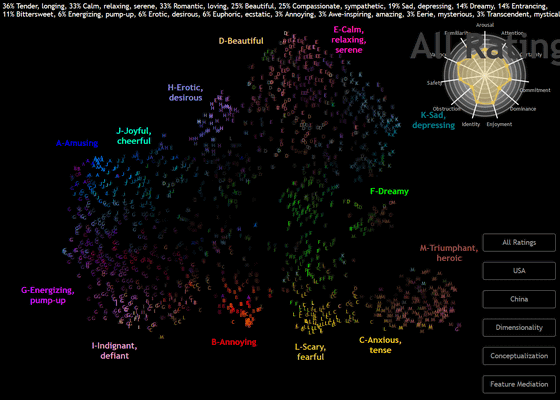 radar chart in the upper right. In this research, 'how much each emotion is evoked' is quantified for each survey result and each is placed on a map. According to research, the American national anthem ' Stars and Stripes ' evokes the feeling of 'pride,' and Ed Sheeran 's ' The Shape of You ' evokes 'joy.'


Music that evokes negative emotions is the background music used in the shower scene of the classic horror movie ' Psycho ' released in 1960.

The BGM that takes about 57 seconds from the following movie evokes 'fear'.


These songs have the potential to 'arouse certain emotions in order for the brain to associate the' situation that heard the song '.' In other words, listening to a song from a horror movie can evoke a 'feeling of watching a horror movie' and recall certain emotions. However, the research team is trying to eliminate the factor that 'the song evokes a specific memory' by examining the emotions of American subjects listening to traditional Chinese folk music.

The study included subjects from two countries, the United States and China, and found that the subjects' emotions for many songs were common. On the other hand, like Joe's BGM, it was common in that `` fear '' was stirred, but there are songs that differed in culture depending on whether the fear was `` positive '' or `` negative '' It was done.

`` Music is a universal language, but humans do not always pay attention to what music is saying, '' said Alan Cowen, the University of California at Berkeley, the lead author of this paper. 'I'm trying to unravel the mystery of how many subtle emotions music causes,' he commented.