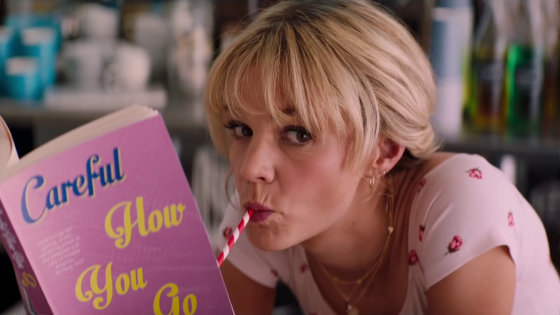 As Britney Spears' string version of 'Toxic' excites the mysterious atmosphere, women are trying to avenge the rapists.


Drunk woman at the bar.

One of the trio of men talking near the counter caught the eye of the woman.

For a woman who is about to collapse ...

One of the three members calls out and goes out of the store together and down the stairs.

It is not clear whether a woman who looks into her face through a car window is conscious.

A man returned home with a woman. Give drunk women more alcohol. A woman saying, 'Let me lie down a little' ...

A man covered it.

To a woman who says 'What are you doing?'

A man ignores a woman saying again, 'What are you doing?'

The man speaks “Hey” in a dossier voice, and the man looks up.

In the next scene, there is no male figure but a woman opening a notebook.

Something is counted in red and blue. From the handwriting, you can see that the count extends over many pages.

The back view of the notebook is completely different from when I was drunk.

'I go to the club every week'

'Pretend to be intoxicated'

'Every week, a good guy comes to see me.'

'You are so cute'

A man who says, 'Kassandra? Were you in the school class?'

Two people bloom in a folk tale at a cafe.

'I think you were a great doctor. What happened?'

'I got out of that abnormal situation.'

'You remember, why did I drop out?'

'I'm not the only one who didn't believe in that,' says a former classmate.

One person can get stuck.

'I'm sorry, there are always such accusations,' he said.

'Which head do you need? Women don't do anything.'

It is implicit that the book in hand reads 'How to proceed carefully'.

'I'm sorry I couldn't go with her,' said Cassandra.

'You Should Go Forward'

'She' is displayed in Cassandra's room ...

Cassandra decides to delete something in her notebook.

'What are you going to do?'

'Why do you think a man must break everything?'

'Because we are children'

Following Cassandra's words, 'If you hear it even more ...'

The windshield of a destroyed car.

A woman says, 'Let's believe him.'

Where does Cassandra go ...?

The situation takes on the appearance of an incident.

'It's a nightmare for a man to be blamed that way.'

'So do you know what a nightmare is for a woman?'

Bag with red cross in hand.

The men who invite Cassandra.

'I've always wanted to be a doctor. Recently, I'm going to return to that path,' says Cassandra, who picks up a syringe.

There was a broken heart labeled 'NINA'.

`` PROMISING YOUNG WOMAN '' is starring Carrie Mulligan of `` 17-year-old portrait '' and `` Brilliant Gatsby '', directed by actress and screenwriter Emerald Fennell, and produced by Margot, a popular actress who plays Harley Quinn. The lobby has been launched by Lucky Chap Entertainment. The movie will be released in April 2020, the month of sexual assault awareness in the United States.