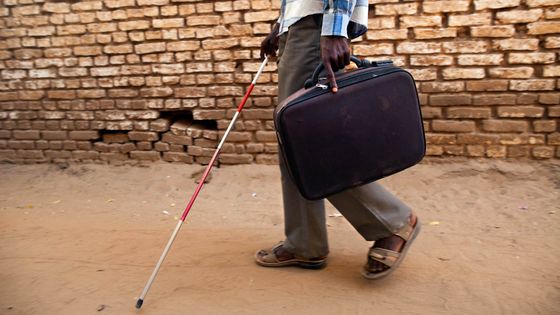 Human touch is present throughout the body's skin, and when something touches the body, it can sense its position and pressure. Luke Miller , a cognitive neurologist at the University of Lyon 1 in France, pays attention to the point that `` humans can feel something not only on their own skin but also with tools in their hands '' Then, I studied how the human brain perceives the tools in hand.

He was interested in the feel of the tools in his hand when he was touching curtain rails in his room. Mr. Miller was able to feel that the end of the curtain rail in his hand hit something outside the field of view, but after careful consideration Miller realized that this was a strange fact, He has begun research on the sensations transmitted through the body.

The idea that humans touch something through the tools they hold and feel the existence of an object is not old. René Descartes , a 17th-century philosopher, also discusses the ability of the blind to perceive the surroundings through a stick in his hands. Scientists, on the other hand, have studied extensively how humans move tools, but have not studied much about the sensations gained through tools. 'Scientists have largely ignored the sensory aspects of using tools,' Miller says. In an experiment conducted by Miller, 16 right-handed subjects held a 1-meter-long wooden stick and touched the stick twice in a row with the stick invisible to the subject. The research team asked the subject, `` Do not react if it determines that two touches touched different positions of the stick, '' `` If it determines that two touches touched the same position of the stick, Press the foot pedal once if it is close to the hand holding the stick, and press the foot pedal twice if it is far from the hand. '

The research team conducted a total of 400 experiments, with two touches as one set, and measured how accurately the subject could determine the position of the object touching the rod. As a result, the subject was able to ascertain the position where the object touched the bar with 96% accuracy, despite the fact that the subject had no experience in performing rod work in the past and had no feedback on performance. That's right. 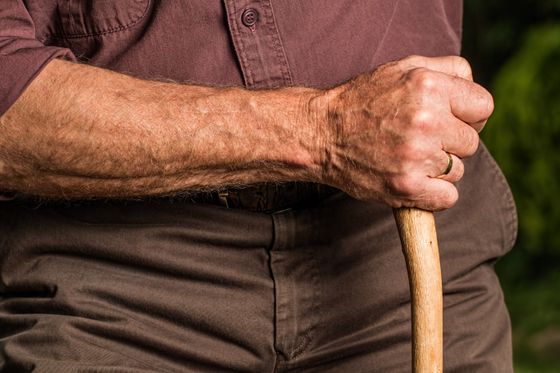 The researchers also recorded brain cortical activity during a series of experiments by attaching electrodes to the subjects' heads. It has long been known that repeated stimuli suppress neural responses in the brain area that controls the sensation, but when the same place on the stick in hand is touched twice in succession, the primary Apparently, remarkable suppression of neural responses was observed in brain regions such as the somatosensory cortex and the posterior parietal lobe . The area where the subject's brain responded in this experiment was the same as the area where humans react when they touch their skin.

In addition, the team compared the speed at which the stimulus travels to the brain when touching the subject's arm and the speed at which the stimulus travels when touching the stick. Then, the time from touching the same place twice until the nerve activity of the primary somatosensory cortex is suppressed (about 52 ms) and the time until the activity of the posterior parietal lobe is suppressed (about 80 ms) Turned out to be almost the same when touching his arm or stick. Alessandro Farnè of the research team says that the neural mechanism for detecting the position where something touched the tool is `` surprisingly similar '' to the mechanism when something touches my body .

The research team believes that when detecting the position of an object that has touched a tool held by a human hand, the 'vibration' transmitted to the tool is important. The research team claims that the system transmits the vibrations transmitted from the tool to the hands, which are mechano-receptors in the skin called patini bodies and transmit nerve signals to the primary somatosensory cortex. 'This study suggests that the vibrations transmitted through the rod, even if not directly touched by the patient, are enough for the brain to detect where the rod was touched.' Commented Farnè. Based on the results of the study, the research team says that using the same process as the human brain to detect contact with the body, it senses contact with tools in hand quickly and efficiently. Claims. Scott Frey , a cognitive neurologist and prosthesis designer at the University of Missouri , praised the study, stating that the sensations of the wearer through the prosthesis should also be considered by the prosthesis creator.