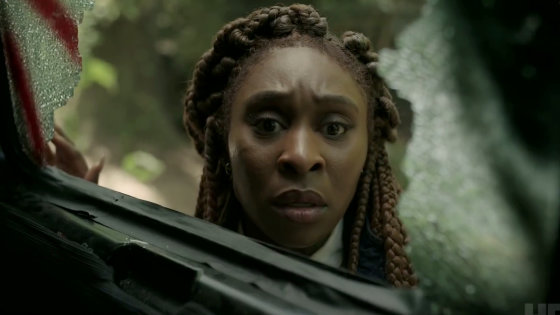 An eleven-year-old boy was murdered in Oklahoma, USA, and a man who was a little league coach with two children's fathers came up with suspects from witness testimony and fingerprints. A new trailer of “ The Outsider ” that visualizes

Steven King ’s “ The Outsider: A Novel ” that new human evidence that can only be thought of as “a person existed” has been released.

With one man being taken away ...

A woman who is upset by seeing it.

A woman called “Glory” seems to be unable to swallow her husband Terry.

“I am confused by this conflicting evidence, just like you.”

A crowd of people in front of the police station.

'Terry, did you kill my child?'

Terry gets criticism from many people.

'But the actions he took after the killing are like we're hoping to arrest you.'

And Glory appeals to Terry's innocence in tears.

Gibney says, 'There is evidence of committing a murder and vice versa.'

'Terry Maitland was 70 miles away on that day when Frankie Peterson was murdered.' ... The video of the surveillance camera was projected.

A situation where everyone leans.

“Human can't exist in two places at the same time”

“Don't exclude the possibility of chance”

'I can't stand this kind of explanation.'

Gibney, who says, 'You will not endure me ...' has the ability to track the criminal with a natural sixth sense.

Meanwhile, the detectives continue to search for evidence of murder.

Children's feet walking on the road.

A van stops at the end of the line of sight.

'I think I should pull myself out of the case investigation.'

'Otherwise something terrible will happen'

If a running Gibney passes the house ...

Suddenly the window of the house breaks.

A disturbing shadow that is projected.

'If you don't believe in yourself, bad things will happen to all of us.'

'I didn't believe anything when I was a kid. God and the devil'

'But now I believe'

'There is something more frightening than I imagined' At the beginning, it is a style that is common to King's works, and it only starts with a good tempo by explaining what happened by listing only the contents of newspaper articles and interviews. Maitland hated to be drawn into the terrible case summary! However, the unexpected development of the second and third rolls continued from there, and the first half is really interesting. Well, this is the usual king. The grip is outstanding. I always get caught, and if I notice it, I can't leave, and I spend a long time reading to the end.