Conventional methods of treating prostate cancer, such as surgery and radiation therapy, have certain risks, and side effects such as erectile dysfunction, dysuria, and defecation disorders have been pointed out. Therefore, a clinical experiment of a new treatment method using MRI and ultrasound technology was conducted, `` We succeeded in eliminating cancer at a significant level in about 80% of subjects, '' a research team at the University of California, Los Angeles Is reporting.

You can see how the MRI Guide TULSA is actually treated by looking at the animation below.


A research team led by Dr. Stephen S. Raman, a professor of radiology and urology at the University of California, Los Angeles, conducted a clinical experiment with 115 male patients with prostate cancer. The average treatment time was 51 minutes and subjects were observed for 12 months after treatment.

As a result of the experiment, prostate cancer was excluded in 79% of the subjects within one year of treatment. In addition, 65% of the subjects found no cancer in the biopsy , and the median prostate prostate antigen (PSA), a biomarker for prostate cancer, was reduced by 95%. The research team also reported that the rate of erectile dysfunction and dysuria was lower than conventional treatments and no urine leakage was observed. 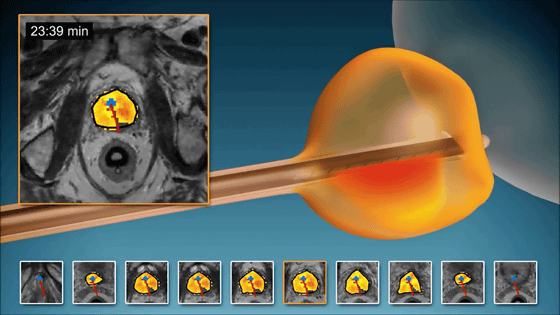 “Unlike other ultrasound systems on the market, the MRI Guide TULSA can monitor the treatment process in real time with MRI, get immediate feedback on heat dose and effectiveness, and provide outpatient treatment. Is one of the fastest treatments for patients. ”

Dr. Raman said, “MRI-guided TULSA has two features. One is the ability to control the treatment area more precisely and maintain urination and sexual function. The other is localized and diffuse. It can be used not only for malignant tumors such as prostate cancer in Japan, but also for removal of benign tumors. '