Commercial shipment of powered suits to strengthen workers finally started, can be rented for over 10 million yen per year 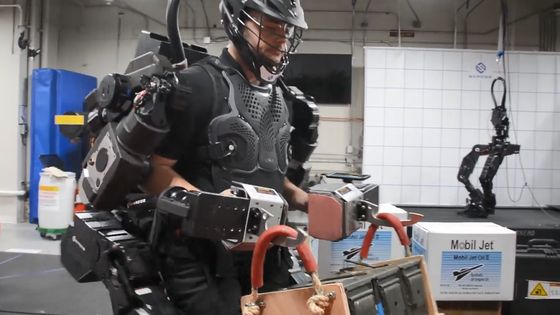 Powered suits that can be worn by humans to strengthen the body and perform tasks that are difficult for humans are a dream for many workers. When the robot development company

This is a movie that shows the person who actually wears Guardian XO lifting a heavy load lightly.


A powered suit worn by a man in the center of the screen is the Guardian XO, which is scheduled for commercial shipment. A battery and other mechanisms are mounted on the back, and parts like a thick tube can be seen. The man hooks a tool that extends beyond the arm to the prepared weight ... There was no particular effort, and it was lifted lightly. The man put the weight on the fixed base at the chest level, but the weight weighed 125 pounds (about 57 kg). If it is a live body, it should be quite heavy work, but by installing Guardian XO it is possible for people inside to lift the load with almost no load. The load felt by men is only a few pounds for a 125 pound weight. Looking at the appearance of wearing Guardian XO from the front, it looks like this. It seems that the weight of the Guardian XO body is 150 pounds (about 68 kg), but Guardian XO which is self-supporting like a humanoid robot can support its own weight with the contact part with the ground, so it is installed The person who is doing does not feel the weight of the main body. The arm can be locked and the wearer can release his hand from the main unit, and the output of the Guardian XO can be easily adjusted using the control panel on the left wrist. If you install Guardian XO, you can lift up to 200 pounds (about 90 kg) lightly, and the load felt by the wearer is only about 10 pounds (about 4.5 kg). Because the part at the end of the arm can be replaced depending on the application ... 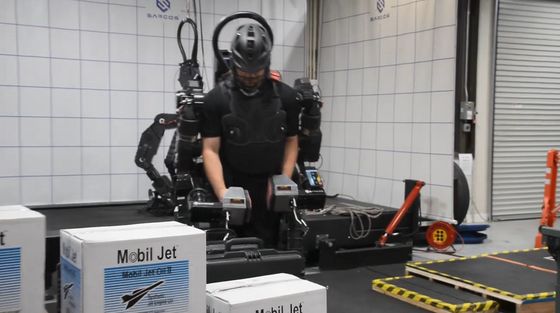 It is also possible to lift luggage like suitcases using hooks. Self-supporting robots require high-performance sensors, mechanisms, and software to balance when walking, but Guardian XO moves with almost no time lag in synchronization with human movement, so the wearer himself balances. Can be taken. Therefore, Sarcos Robotics did not need to develop a special program to support Guardian XO. 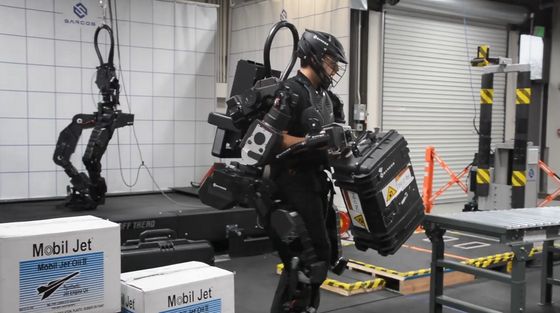 The Guardian XO is an electric powered suit powered by two 12 pound (500 kg) 500W batteries that can be used for 2 hours without changing the battery. The battery is replaceable, so you can change it every 2 hours and use it all day. It is essential to improve energy efficiency for commercial shipments, and the fact that powered suits can be moved with a 500 W battery was one of the most important innovations, Sarcos Robotics will continue We plan to improve battery efficiency.

It takes only a few seconds for humans to attach and detach Guardian XO, and it seems that new users can learn to operate in minutes. Also, it seems that it takes about 1 to 2 hours to work comfortably, but it is said that the first person who starts using it is confused that 'I should have a heavy object but I do not have that feeling'. Even if the load on the body is several kg, it means that you are actually lifting an object close to 100 kg, so when you move or stop, you may be confused by feeling the inertia of a mass object .

Sarcos Robotics also makes Guardian XO safety a top priority, and all joints are limited in speed when moving. For this reason, punches and kicks cannot be delivered using bodies strengthened by powered suits. Since the range of motion of the joint is designed not to exceed the range possible for humans, there is no danger that the joint of the powered suit will bend in a direction that does not appear and the arm will be twisted. 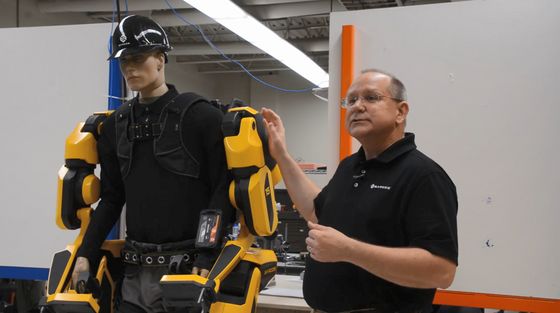 Sarcos Robotics believes that the best solution is 'to enhance human intelligence and judgment with the power and durability of robots' in the current situation where every company strives to improve the efficiency of workers. It is. Therefore, Guardian XO emphasizes that it can improve the productivity of certain workers and perform dangerous tasks more safely than before.

Guardian XO is useful for the type of work that repeatedly lifts heavy objects, which is difficult to automate, or at least not cost effective. Also, such work places a heavy load on the human body, and damage to muscles and joints can limit the length of time a worker can work and can place a semi-permanent medical burden. Therefore, by using Guardian XO to improve worker productivity and reduce the burden on the body, skilled workers can work safely and for a long time .

Of course, for a company to adopt Guardian XO, it must be convinced that Guardian XO is cost effective. According to Sarcos Robotics, Guardian XO can lift a weight of up to 200 pounds and can reduce productivity loss due to fatigue, so it can actually improve productivity by 4 to 10 times compared to conventional Guardian XO. There was also a positive response from workers who tried XO. At the time of writing the article, it seems that the initial unit Guardian XO can only be attached to people with a height of 162 cm to 180 cm, but with future improvements 90% of American workers will be able to wear Guardian XO is.

Guardian XO is scheduled to begin commercial shipments of the initial units from January 2020, with the first customers being heavy industry and the US military. Guardian XO is a rental type and the annual cost is 100,000 dollars per unit (about 11 million yen), at least 10 units will be shipped to companies that can be rented in a lump, and professional engineers will be dispatched together It has become. 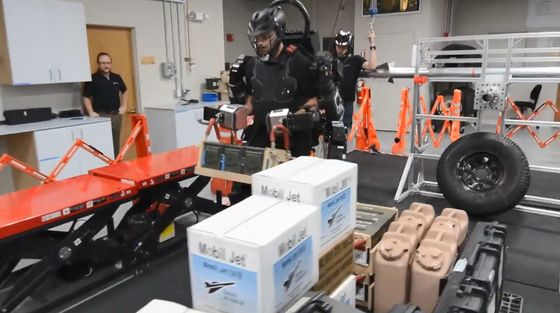