What is the MOD “Randomizer” that creates new discoveries and adventures in retro games played in the past? mod called “Randomizer” is becoming active in old games that have played so much as to memorize. Ars Technica 's Scott White talks about how randomizers change and spread the game.

What was introduced as the most basic randomizer was the one used in “The Legend of Zelda: The Triforce of the Gods ” that appeared in 1991. Randomizers change the position of items hidden in the game and rewards from dungeon quests. You can also change the look of the link with options created by many fans.

The following image is a change of the appearance of the link appearing in 'Legend of Zelda: Triforce of the Gods' to X appearing in the Rockman X series . It was a randomizer that started in a small community, but has evolved as part of the genre of retro games at the time of writing. In 2016, a website introducing a

list of video game randomizers was created, and hundreds of game randomizers and mods can be obtained. Metroid , golden sun , Mother2 , Faxanadu , Adventure Island , DOOM , etc., has become as randomizer of various titles for is updated.

Shuffle where items can be found and changes in skills and abilities are fairly standard randomizers. There are also randomizers that change the items that are found, or that completely change the way the game is played. As one of the special randomizers, there are things that combine two games and have to progress both in one play.

For example, Randomizer, which mixes “ Super Metroid ” and “The Legend of Zelda's Triforce,” is a special adventure that travels between the worlds of Zebes and Hylar . A chaotic world has been built, where an uncle who originally entrusted a sword and shield to the link handed over high jump boots , and master swords were available at Norfair , the cave of Zebes .

“Randomizer offers unlimited possibilities for games that are old and fresh,” White says. In games remodeled by randomizer, deep knowledge of the base game before using MOD is useful, for example, encountering a situation where you fight against a strong enemy with poorer equipment than normal play, and with a single shot it will increase your physical strength Even if it is cut off, it will be possible to advance the game by making full use of the special skills of party members and considering detours.

Randomizers seem to have spread and disseminated mostly from video distribution, such as live gameplay in the past 1-2 years. Randomizers are spreading in a variety of ways, including individual distributors and large-scale charity streaming events such as Awesome Games Done Quick and RPG Limit Break .

Randa tournaments and race using the economizer is, randomizer community become a classic, Challonge and tournament events such as, SpeedRunsLive , SpeedGaming are also held large-scale events many times due to a number of organizers of such. The SpeedGaming live event was held in October 2019 for the first time using a randomizer-based game tournament with a prize of $ 3,000 (about 300,000 yen). In SpeedRunsLive, races using multiple randomizers are always held, and more than 100 players participated in the randomizer tournament of the largest community, The Legend of Zelda: Gods Triforce. 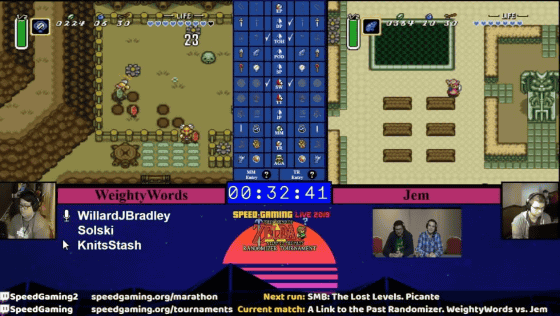 White said, “There is a strong nostalgia for the game, and the randomizer will not completely replace the experience we have gained in the game we love,” he said. Developers, event organizers and viewers all agree that the growing randomizer will bring new life to the old game, and the technology that allows you to play the old game again and make a new adventure every time It will recreate the wonder and discovery of the first time you play the game. '