What are “special made” pizzas that can be eaten at Apple and Google employee cafeterias? 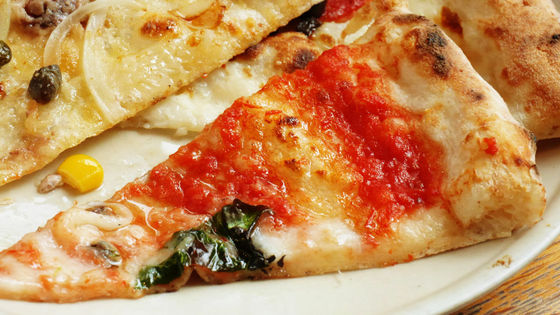 Apple was founded in the home garage of Steve Jobs also be started from the search engine was a graduate student research theme of Google, '

GAFA enough to be lumped together with', is a technology company that has grown into the world's largest. Apple and Google are known for their generous benefits, and technology media Motherboard reports that pizza is a popular menu in cafeterias that employees can use.

In the Apple headquarters cafeteria in Cupertino, California, luxury pizzas are offered daily at discounted prices. “Apple headquarters pizza is so delicious,” and there was a limit of “up to three per person”.

“I swear, the pizza offered at Apple headquarters is the best pizza I've eaten in the United States,” said Luca Tobesco, an Italian hacker from Italy. And Ivan Rodriguez, an engineer living in Silicon Valley who ate in the Apple headquarters cafeteria in 2017, commented, “Apple's pizzas are made to order and are hot and perfect.”

The following image is Apple's pizza taken by Rodriguez. Pizza prices range from $ 7 (about 760 yen) to $ 8 (about 870 yen). According to Rodriguez, if it is a famous pizzeria in California, it will cost about 16 dollars (about 1700 yen) to 19 dollars (about 2100 yen) with one pizza, so it is quite cheap and high quality at Apple's employee cafeteria It looks like you can eat pizza. This paper dish is a pizza-only container that Apple

acquired a patent in 2017. The lid has a hole to let the moisture in the container escape, and it is said that the pizza has been devised so that it won't become a fan. The pizza container itself has been used by Apple since 2010, and Steve Jobs's tomb, which died in 2011, is home to a pizza container with notes from employees working at Apple's cafeteria.

@mantia @panzer the Caffè Macs pizza box is nice and when Steve Jobs died was signed by many Apple Food's employees pic.twitter.com/wG5A63C3xc

On the other hand, at the Google employee cafeteria, Google staff can eat for free, and pizza is also a popular menu here. Meanwhile, Motherboard reported that a pizza topped with insects was served in the Google Office cafeteria in Zurich, Switzerland.

The following image is a pizza with insect topping that is behaving on Google. As food shortages have been screaming in recent years, insect food has been expected as an important protein source , and this insect-topping pizza has also been provided free of charge as an example. However, it seems that not all the Google staff welcomed this insect topping pizza, some staff told Motherboard that `` This pizza is one of the things that freezes my back '' `` From employees 'The reputation of the company was terrible, and once it was offered, it never appeared on the menu again.'

Svbl, a security researcher, named the pizza topped with insects 'Pizza La Bughuntero'. This name is based on a bug hunter (Bughunter) who finds a bug in the software, another Google staff commented `` I ate this pizza topped with this bug and reported the first pizza bug '' did.