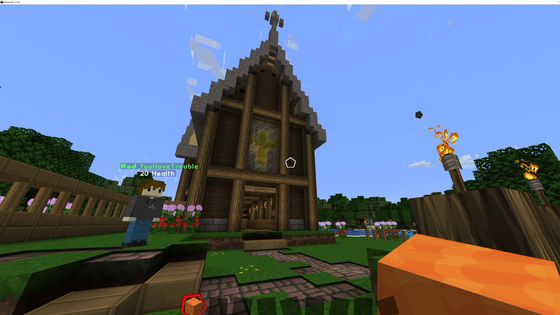 Jesuit priest Robert Barser is a person who has studied engineering in Silicon Valley. Mr. Bareser has prepared a Minecraft server in Vatican for Minecraft , which has become the world's best-selling game with a cumulative sales of over 176 million .

This Vatican priest is making his own Minecraft server to offer a less-toxic community for gamers
https://www.vg247.com/2019/12/01/the-vatican-is-getting-its-own-minecraft-server-to-offer-a-less-toxic-gaming-environment-for-players/

Minecraft is a game that allows players to freely adventure in the open world and create buildings and villages. If you have a server, you can play multiplayer online, and you can also go to a server set up by someone else. Minecraft has a very high degree of freedom, and various creative activities such as reproducing the Japanese archipelago on the game, creating a word processor with storage device , creating a 1 KB storage device that actually operates Has been done. From the height of the degree of freedom, Mine craft as a lead to or grown a problem-solving skills to enhance the children's creativity, promptly the Mine craft required courses in Sweden of the school takes place is a movement to, the school from the official A version of ' Minecraft: Education Edition ' for education has been released.

In such Minecraft, there are times when the server is released in order to expose the super masterpiece made with my server to Internet users, but some extreme players called `` trolling '' ruin the place, much effort May ruin your creative work.

In 2014, the Danish government made an attempt to fully reproduce its country on Minecraft, but vandalism also appeared on this server, causing destruction, and the world was ruined.

In Minecraft, if the Danish government reproduces the national land with 4 trillion / 1 TB super masterpieces, it will be destroyed-GIGAZINE These “trolls” are not limited to Minecraft, but appear in various games. Mr. Barser is aiming to “make the environment less toxic than usual” by providing Vatican with an online multiplayer environment that is constantly fighting. “We aim to create an environment where we can express creativity freely and build relationships with each other.”

The project of building a multi-play environment for less toxic games started on Twitter, and Baller said that he voted for a game that he wanted a follower to have a test server for. There are four games that are candidates for building a test server : Rust, ARK: Survival Evolved, Team Fortress 2, and Minecraft. Twitter users participated in the vote, and it seems that Minecraft was selected with a vote rate of 64%.

Ok ... I want to spin up a few servers in the Vatican for gamers who want a little less 'toxic' and a bit more community.

What should be my first server?

An interview video by Rome Reports, a reporter related to the Catholic Church who was interested in Mr. Bareser's attempt, has also been released.


In the movie, Mr. Barcer said, “No one understood the content of Google ’s latest service and the optical fiber operated in the Atlantic. But as time went on, I was talking about technology-related stories. We started to realize that we were a priest who was versed in ``, and built a game server in the Vatican by accidentally connecting `` Demand on the net '' and `` Mr. Barser, a person familiar with technology '' It is said that the project to do has started.

James Martin, a Jesuit priest who knew Baresa's activities through reports in Rome Reports, said, “Robert Barser, a brother and friend of the Jesuits, has set up a Minecraft server for the Vatican. Tweeted, “I understand that Mr. Barser ’s project is a hot topic among fellow priests.

My #Jesuit Brother And Friend Robert Ballecer, SJ Attopadresj Has Created A Minecraft Server For The Vatican. Https://T.Co/R33dG0YkLF

Minecraft's test server has already been in operation since November, and feedback is being accepted. The test server address is “minecraft.digitaljesuit.com”.

Plenty of creativity on display from my Minecraft geeks!

Jump on and build something! Free space in Tycho Station, the Glass Palace, Sealab and in our Nether hub!

“There are very talented geeks who make something so great on Minecraft!”

However, when Bareser's interview video by Rome Reports was released, access to the test server seemed to increase all at once, “Hey, Twitter user gamers. Minecraft server has fallen into a muddy state completely. Sorry, the current server is a test instance and I didn't expect it to be so exciting (increasing access) in just a few hours. I'm working on moving the server to a larger virtual machine . '' Tweet and reveal that access has skyrocketed.

This was a test instance and I didn't expect it to ramp up like this over just a few hours.

I'm working on migrating everything to a bigger VM.

Furthermore, `` When looking at the log of Minecraft's test server, there seems to be a user who constantly connects and disconnects to fill the player slot and drop the server, '' also reports the existence of vandalism. .

I'm looking at the logs of the Minecraft test server and it looks like there is a handful of people who are constantly connecting and disconnecting to fill the player slots and kill the server.

In addition, Mr. Barser said on December 4, 2019 `` It has been a test server that has been operated so far, but it has been attacked by building a list of about 100 user IDs and IP addresses prohibited so far We have dealt with the vandalism, and tomorrow we will finally begin operating our production server and we will be attacked by the vandalism, but we can get a head start with the ban list. ' doing.

The MC server we've been running was the test server.It allowed us to build up a ban-list of 100 or so User IDs and IPs and see where we would be attacked.

Tomorrow we launch the production server.

It will still get attacked, but now we've got a head start.pic.twitter.com/XvuLkvB0MA