[Delivery] Masaru Nakamura, a voice actor known for his narration on 'Wings is a Witch' 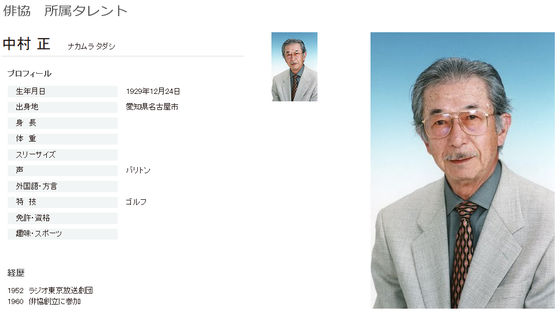 A founding member of the Tokyo Actors' Co-op (Haikyo), voice-overs such as the narration of the drama “Wings is a Witch” and the role of Charlie in “Charlie's Angel”, the role of all-in-one in the animated movie “Summer Wars” and “Mirai of the Future” On November 11, 2019, voice actor Masamura Nakamura who played an active role in a gentle baritone voice such as the Shinkansen It was announced that he died of sepsis due to fire. I was 89 years old.

After joining the Radio Tokyo Broadcasting Theater Company in 1952, he participated in the establishment of the Tokyo Actors Cooperative Society (Haiku) in 1960. Since then, he has been at the forefront for about 60 years.

One of Nakamura's masterpieces is the overseas drama “Wings is a Witch”, which was first aired between 1966 and 1968. 'The wife's name is' Samantha '. The husband's name is' Darling '. The two ordinary people fell in ordinary love and got married in a very ordinary way. The only difference was the wife- The narration “It was a witch!” Was later used as a parody in other programs and commercials.

You can listen to the narration by Mr. Nakamura in a commercial that commemorates the 50th anniversary of the drama broadcast. Speaking of “the wife is a witch”, this narration is familiar, but the original version is unique only in the Japanese dubbed version, except for the first time.

Broadcasting 50th Anniversary “Wife is the Witch” at once! Season 1-YouTube

In addition to being in charge of a number of works by dubbing, he is also widely active in TV drama appearances and program / CM narration.

In the animation, the role of Tetsuji Kawakami of `` Giant's Star '', the opening narration reminiscent of the `` Wife is the Witch '' mentioned above in `` Ranma 1/2 Hot Fight '', `` Giant Robot THE ANIMATION Day of the Earth Quiet '' He played the role of Dr. Bigfire, etc. of 'Tetsujin 28' (2004 broadcast version).

In the animation “Legend of the Galactic Heroes”, a male voice actor from the industry who appeared in the series, he was in charge of Earl Franz von Marinedorf, the father of Hildegard von Marinedorf, the secretary of Reinhard. In the new work “Die Neue These”, this role has been handed over to Masahiko Tanaka .

In the movie directed by Mamoru Hosoda, she appeared in five films: “Girls who take the time”, “Summer Wars”, “The Rain and Snow of the Children”, “The Child of Bakemono”, and “The Future of Mirai”. 'Summer Wars' Jinnai Mansaku is a grandmother of the Jinnai family, a large family, and the third son of Sakae. In the theater preview, while Kenji who asks the protagonist Kenji asks the question ' Well , Mr. Muko, who is Nisei? ' ' Is this? '


You can also hear the narration that makes you feel kindness and warmth in the Kobayashi-sanchi no Maid Dragon PV below.


According to the Hakyo that Mr. Nakamura belonged to, there is no plan for a farewell party so far.